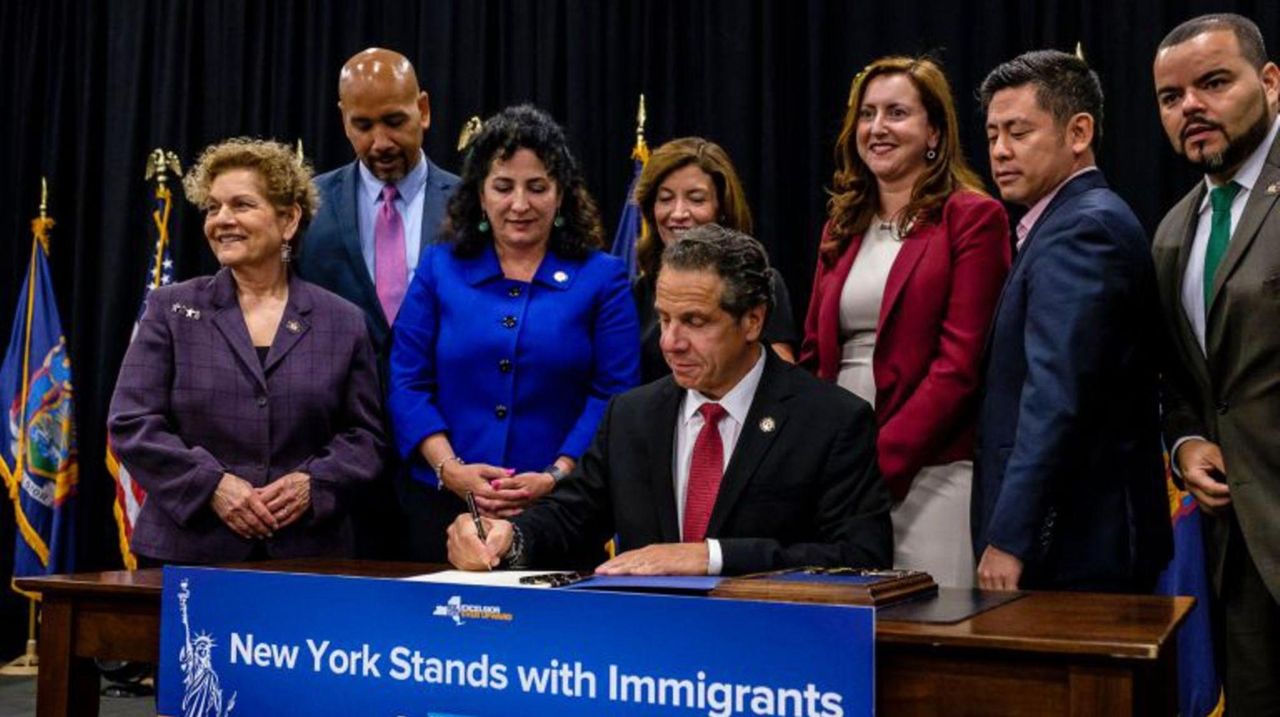 Gov. Andrew M. Cuomo signed legislation on Wednesday allowing immigrant New Yorkers who are parents to designate who should be responsible for their children in case the federal government moves to deport them. Credit: Newsday / Matthew Chayes

Immigrant New Yorkers can now designate who would be responsible for their children in case the parent or other caregivers are detained for suspected illegal immigration, under legislation signed Wednesday by Gov. Andrew M. Cuomo.

The bill — 7899 in the State Assembly and 6217 in the State Senate — amends the existing Surrogate’s Court Procedure Act, which has long granted parents the right to choose a guardian upon death, incapacitation or disability.

Cuomo said the change, which takes effect immediately, was made necessary because of a since-rescinded White House policy that separated migrant parents and children trying to cross the border into the United States illegally.

Under that policy, children were placed in shelters and foster care while a parent was to be prosecuted. The Trump administration instituted the policy in the spring, but reversed the directive June 20.

What do you think about separation at the border?

“There’s a real danger that somebody can just be deported and worry about where their children go and who’s taking care of their children, but that is a reality today in this administration,” said Cuomo, at a signing ceremony at Hostos Community College in the Bronx.

There are similar procedures in place in states like Virginia and California.

In New York, a parent will be able to download from the state’s Office of Children and Family Services website a form to be printed and notarized and given to the would-be guardian, Cuomo spokesman Tyrone Stevens said. The form should be updated by Thursday to cover immigration, Stevens said.

At the signing ceremony, Cuomo criticized how the U.S. Immigration and Customs Enforcement agency does its job.

“Federal government has taken the agency ICE — ICE was supposed to be an anti-terrorism organization — it was formed after 9/11 to fight terrorism,” he said. “ICE is now a political police organization for the president's political agenda.”

The legislation Cuomo signed grants a court permission to appoint an attorney to act on the child’s behalf.

The status quo was "completely cumbersome" with formal legal filings, an in-person trip to court and the potential for predators charging thousands of dollars claiming falsely to expedite the process, said Anthony Posada, a supervising attorney at the Legal Aid Society of New York City, which represents indigent immigrants.

The process is now vastly simplified with the only paperwork being the state form, Posada said.

Another bill Cuomo signed — 7905 in the Assembly and 6016 in the Senate — permits parents to appoint the temporary caretaker for up to 12 months, double the six months allowed under prior law.

The policy also considers the possibility that the parent or caregiver could be deported.

After 12 months, the non-parent guardian can go to court to seek a more permanent solution, such as custody until adulthood, according to Stevens.

On Tuesday, a federal judge in California ordered that all migrant children detained under the White House policy be reunited with parents within 30 days.

There are an estimated 2,000 or so families who remain separated, according to the American Civil Liberties Union, which sued the Trump administration over the separation policy.

The White House did not immediately return a call seeking comment.

Viral photo inspires record-breaking fundraiserWhat you need to know about the "Reunite an immigrant parent with their child" fundraiser, its photo inspiration and donating. 8 kids from border staying on LI, agency saysEight of the approximately 2,000 children separated from their parents at the U.S.-Mexico border as part of a controversial immigration policy are staying in a federally approved shelter on Long Island. Letters: Readers react to border controversySadly, families are torn apart every day when fathers are taken away because they have ... Letters: Two sides of family-separation debateTwo sides of family- separation debate Every day, American children are separated from their parents. ...