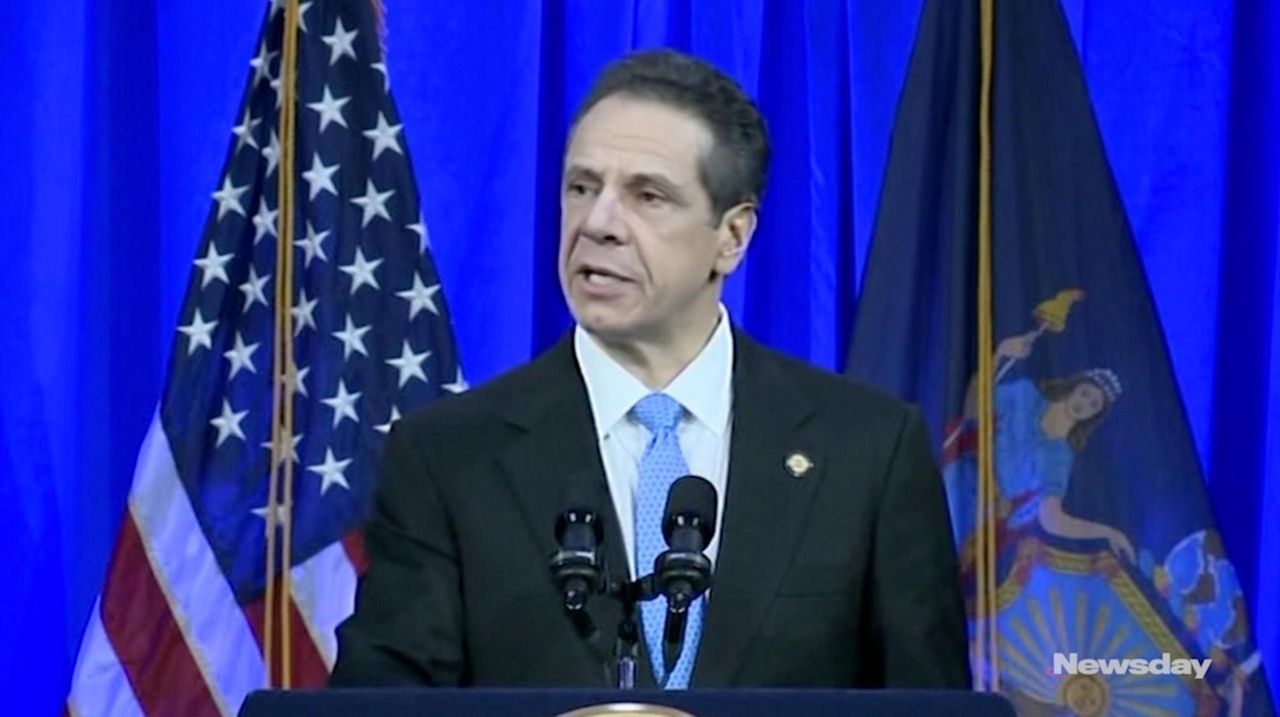 Gov. Andrew M. Cuomo, a Democrat beginning his third term, delivered his inauguration speech Tuesday on Ellis Island, after being sworn in by Chief Judge of the Court of Appeals Janet DiFiore. Credit: News 12 Long Island

ELLIS ISLAND — Gov. Andrew M. Cuomo on Tuesday said President Donald Trump was guilty of “failure of leadership and government malfeasance,” saying the Republican has sought to foment a cancerous division in America for political benefit.

“Like looters during a blackout, they didn’t cause the darkness but they exploited it,” Cuomo said of the Trump administration and what he called its efforts to “demonize new immigrants” and “demonize our differences.”

Cuomo, a Democrat beginning his third term, delivered the remarks in his inauguration speech strategically staged at Ellis Island, the speck of land in New York harbor that is a symbol of immigration.

Though it was a state inauguration, Cuomo focused largely on national themes, saying the nation is confronting a “social depression” akin to the economic depression of the 1930s, as well as division he likened to a “cancer spreading throughout our society.”

Trump didn’t cause the “fear and frustration,” the governor said, but he said the president is cynically trying to benefit politically.

“As our nation once confronted a great economic depression, we now confront a great social depression,” Cuomo said. “People’s frustration turning to fear and the fear turning to anger and the anger turning to division. It is impossible to overstate how dangerous, how malignant this condition is. It is a cancer that is spreading throughout our society. … This is not the America that lured our ancestors across great oceans to this sacred hall of hope.”

Cuomo, a potential 2020 presidential candidate, has used state tourism funds to keep Ellis Island and the Statue of Liberty open amid a federal shutdown sparked by an immigration stalemate between Trump and Congress. Cuomo called Ellis Island a “sacred place” and a “historical portal” that gave immigrants hope.

And he even name-checked two immigrants who came through Ellis to enter America: Frederick Trump, the president’s grandfather, who came from Germany; and Richard Cawley, grandfather of Vice President Mike Pence, who came from Ireland.

Cuomo's critics have said the Democrat is conflating legal immigration and illegal immigration. They also have accused him of using the immigration issue as a way to get his name in the mix of 2020 Democratic candidates. Republican state chairman Ed Cox said Cuomo had “White House delusions.”

Ellis Island was once the nation’s busiest immigration station, welcoming more than 12 million immigrants to the United States before it was closed in 1954.

Cuomo, 61, made his support for immigration and his opposition to Trump’s agenda the center of his re-election campaign last fall, talking more about national issues than state. Cuomo easily defeated Republican Marc Molinaro, the Dutchess County executive, in the general election.

The White House did not immediately return an email seeking comment Monday night, but Trump has previously taken aim at Cuomo via Twitter calling him "Hightax Andrew Cuomo."

James, the first black woman to hold statewide office and the first female state attorney general, vowed during her campaign that she would seek state charges, if merited, against Trump in certain cases. On Tuesday, she didn’t mention the president by name, but referenced her previous pledge, saying “even the most powerful cannot use a loophole to evade justice.”  The attorney general 's office has had a long-running lawsuit accusing the New York-based Trump Foundation of violating state charities and campaign finance law.

Cuomo noted Democrats, for the first time in years, in 2019 will control all the levels of state government. He said that made him feel “liberated” and said working with a Republican-led State Senate had been like fighting with one arm behind his back. But progressive activists and even some Democrats had long accused him of propping up Senate Republicans, being too fiscally conservative and opposing some of their proposals.

Cuomo promised to enact a raft of “progressive” measures in 2019, including new abortion, gun-control and voting laws. But legislators have pointed out that all the high-profile items on Cuomo’s agenda have been supported and voted for  Democratsnm for years. The governor is just adopting the agenda of Democratic lawmakers, they said. Republicans in the State Senate had long resisted his efforts but Democrats won control of the chamber this fall.

“These are bills the Assembly has already done and our members have long fought for,” tweeted Michael Whyland, spokesman for Assembly Majority Leader Carl Heastie (D-Bronx), who didn’t attend Cuomo’s address.  Neither did new Senate Majority Leader Andrea Stewart-Cousins (D-Yonkers).

Legislative politics aside, Cuomo returned again and again to his theme of New York as a bulwark against the Trump administration.

“When they write the history books and ask what did we do —  in the face of anger and division, when people were disillusioned,” the governor said, “let New York’s answer be that in this defining moment we brought healing and light and hope and progress and action.”