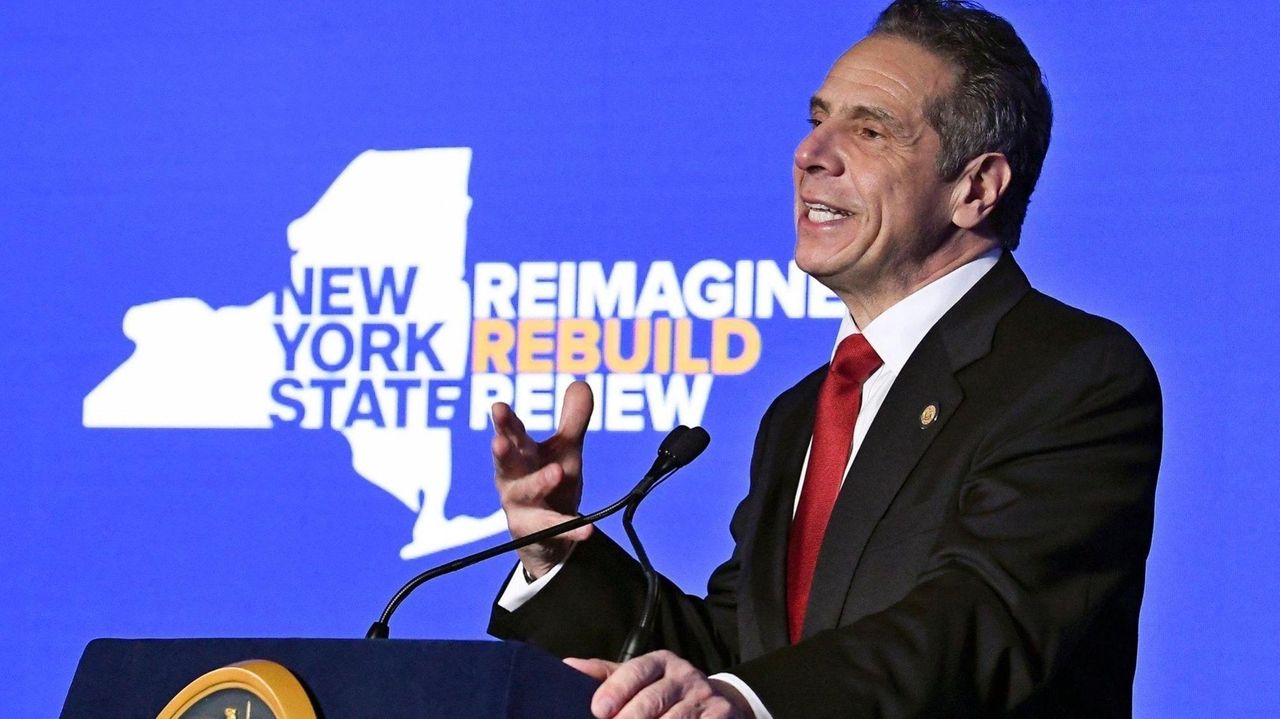 Gov. Andrew M. Cuomo sought to deflect criticism Friday about his administration's underreporting of nursing home deaths from COVID-19, suggesting pandemic deaths were a tragedy no matter where they occurred or how they were tallied. Newsday's Chelsea Irizarry has the story. Credit: Newsday / Alejandra Villa Loarca; Howard Schnapp; WhiteHouse.gov

Gov. Andrew M. Cuomo sought to deflect criticism Friday about his administration's underreporting of nursing home deaths from COVID-19, suggesting pandemic deaths were a tragedy no matter where they occurred or how they were tallied.

The Democrat said the nursing home issue had become a "political football," created by the former Trump administration — even though criticism of the Cuomo administration has been harsh and bipartisan.

"I understand the instinct to blame, or to find some relief for the pain that you’re feeling. But it is a tragedy," the governor said, speaking for the first time in response to a report by state Attorney General Letitia James that said the Cuomo administration had underreported the number of deaths of nursing home patients because of the pandemic by as much as 50%.

The administration, hours after the James' report was made public, released data showing thousands more nursing home residents died of COVID-19 than the state's official tallies had previously acknowledged.

The governor and aides said deaths, all along, had been allocated where they occurred, following usual practice. But the calls for a more detailed accounting of nursing home residents had come for months, from media, state and local officials and families with loved ones in long-term care.

The governor said the Trump administration was responsible for the political storm about accounting for nursing home deaths.

"To play politics like they did … that was mean," the governor said.

Some of the harshest criticism, however, has come from New York Democrats in the State Legislature.

"Shocking and unconscionable," said Assemb. Richard Gottfried (D-Manhattan), chairman of the Assembly Health Committee. He was among many lawmakers who had been pressing Cuomo and Health Commissioner Dr. Howard Zucker for more complete data and accusing them of stalling. At an August legislative hearing, Zucker said he'd present the numbers soon.

But nothing was produced — until a few hours after the James report was released.

The new data seemed to confirm James’ projections: currently 12,743 nursing home patients have died either in their facility or a hospital because of the virus. That's a more than 40% increase from the roughly 8,700 nursing home deaths the state had been reporting before Thursday.

The updated number includes deaths in nursing homes confirmed and presumed to be from COVID-19 and confirmed deaths of nursing home patients in hospitals.

Asked at a news briefing Friday why it took James' report to prod the agency, the commissioner said: "Back in August, we said we would get the legislature the number and we are working on it … once we saw the attorney general report, we realized we had to get this out quickly."

Assembly Minority Leader Will Barclay (R-Pulaski) accused the administration of misleading the public and the media for months to avoid scrutiny for his nursing home policies during the pandemic.

"It took an investigation from New York Attorney General Letitia James to finally get clarity on the true number of nursing homes residents who died during the COVID-19 pandemic," Barclay said in a statement. "That information should have been provided months ago by Gov. Andrew Cuomo and the state Department of Health."

Long Island's four Republican senators on Friday called for a federal investigation into the matter.

Cuomo said his administration didn't intentionally do anything wrong, including a March 25 directive that required the homes to accept residents with COVID-19 discharged from the hospitals, if they had the capacity. Critics have said that helped spread of the virus, but the administration has said the spread was primarily due to staff and visitors coming in and out of the facilities.

"I believe everybody did the best they could," Cuomo said. "I believe the state Department of Health, they gave their best guidance and made the best decisions on the facts that they had."

Nursing home fallout for Cuomo: Brutal and bipartisanDemocrats and Republicans lash out after the attorney general's report on Cuomo's handling of COVID-19 in nursing homes.