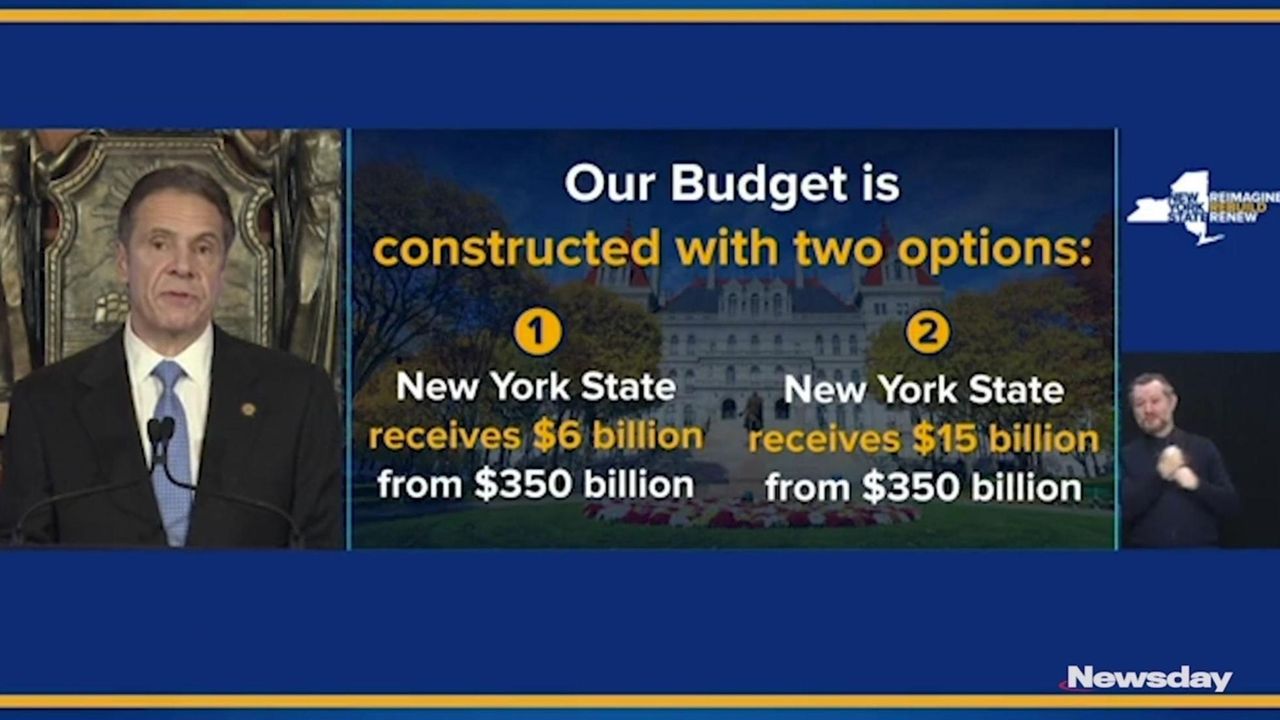 ALBANY — Gov. Andrew M. Cuomo said Tuesday he will take the unusual step of presenting a new state budget with two options, based on how much aid Washington sends New York to recover economically from the COVID-19 pandemic.

Cuomo, a Democrat, said big ticket items, such as financial help for local school districts and tax rates on the wealthy, hang on the outcome. The latter is almost sure to become a lightning rod for budget negotiations with an emboldened, Democratic-led State Legislature, which has been more progressive on the issue than the governor.

Cuomo said his "worst case scenario" envisions the state receiving $6 billion from the federal government. And it would result in spending cuts, tax hikes and borrowing. It would keep the overall budget flat at about $193 billion.

The second scenario, the best case, presumes $15 billion in pandemic relief aid and would allow New York to dramatically hike school aid, follow through on a previously enacted middle-class tax cut, restore some of the money it withheld from local governments in 2020 and provide an array of tax credits to help restaurants, theaters and small businesses to recover from the economic fallout of the pandemic.

The governor has been haranguing Washington for more help since the pandemic triggered large-scale shutdowns in New York last March. Congress has come through with aid packages to help individuals and school districts, though nothing for local governments. The governor now is banking on the incoming Biden administration for more.

Presentation of such a two-step budget plan is unusual for a New York governor.

But Cuomo said it was necessary because New York can't cover pandemic recovery needs on its own.

If New York gets $6 billion, the overall state budget will stay flat at about $193 billion. Of that, $103 billion is state money with the rest largely coming from the federal government.

School aid would increase even in Cuomo's "worst case" scenario by $2.1 billion. That's thanks to a $4 billion education earmark New York received from Congress in the December stimulus package. The influx would more than offset a roughly $2 billion decrease in state funds Cuomo proposed in this case.

If Washington comes through with $15 billion for New York, the state, rather than reducing its share of school expenses by $2 billion, would be able to increase it by more than $3 billion over two years, the governor said.

A bigger fight might loom over tax rates for the wealthy.

The governor, who has said he's afraid tax hikes would fuel New York out-migration, said he would back a legislative proposal to raise tax rates for those earning $5 million a year or higher — only if New York realizes it's "worse case scenario" in terms of federal aid.

If Washington comes through with the $15 billion, Cuomo budget director Robert Mujica said the need for a tax hike "goes away."

"We'll see about that," Senate Deputy Majority Leader Mike Gianaris (D-Queens) shot back on Twitter. Democrats now have a two-thirds majority in the state Assembly and Senate and could conceivably override a gubernatorial veto if it came to that.

The governor previously opposed the former, saying it wouldn't bring in much more money. But that was before the pandemic hit.

Regarding marijuana, Cuomo and the Legislature came close to approving it before, but talks broke down on how much of the tax proceeds to earmark for communities of color impacted by the "war on drugs." To address that issue, the governor said under his plan $100 million of the estimated $350 million generated annually by marijuana taxes would go to a "social equity fund."

For Republicans, Cuomo's two-step presentation amounted to "passing the buck."

"For all the talk of ‘leadership’ that comes from this administration, most of the morning was spent passing the buck on to Washington, D.C.," Assembly Minority Leader Will Barclay (R-Pulaski) said. "Harsh budget realities have existed for several months, but today, we received a pair of proposals that simply extend the wait-and-see approach filled with contingencies and little clarity."

Among other Cuomo budget highlights: