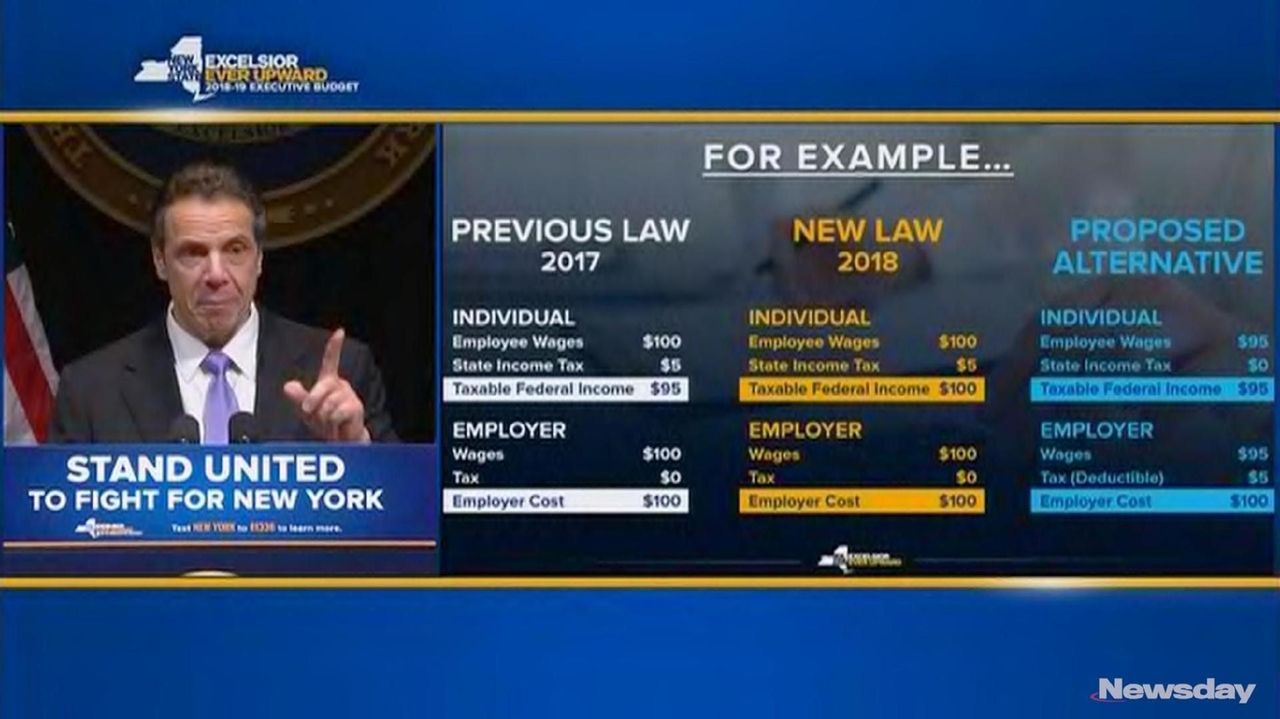 ALBANY — Gov. Andrew M. Cuomo on Tuesday touted his proposal to mitigate the impact of a new federal tax law that could cost many New Yorkers thousands of dollars, but the issue prompted questioning by the State Legislature.

Cuomo had promised to provide details in Tuesday’s budget address about his proposal for a new payroll tax and a novel use of charitable contributions to help offset a new federal cap on the deductibility of state and local taxes. Instead, Cuomo said a study of his proposals will be released by the state Taxation and Finance Department on Wednesday.

“Just the concept of a payroll tax is very challenging,” said Senate Majority Leader John Flanagan (R-East Northport) after Cuomo’s annual budget address. “Our finance people are going to look at this in painstaking detail.”

Cuomo led and closed his 2018-19 budget address Tuesday by underscoring the need to adapt a dramatic change in the state tax code to counter a federal tax law passed last month by the Republican-controlled Congress and President Donald Trump.

The GOP measure cuts federal income taxes for some middle -class families as well as corporations and the wealthy, which Republicans say will spur the economy.

But to help pay for the cut, the tax law caps the federal tax deduction for state and local taxes, often referred to as SALT, at $10,000. That could cost some typical middle-class families and upper middle-class families with high property taxes a lot of money. Long Island, New York City, and Westchester residents would be hit hardest in the state..

On Tuesday, Cuomo announced a new wrinkle. He said some higher-income middle-class families could be authorized to pay some of their personal state and local taxes as a business expense, which would be fully deductible.

Each proposal is aimed at offsetting the new federal cap on deductibility by shifting state and local taxes to fully deductible tax payments such as the payroll tax and charitable donations.

“This is going to be very damning from an economic development point of view,” Cuomo said of the federal law. “This is the fight for New York’s future.”

But concern in the Legislature was already brewing.

“I think it will be difficult in the Senate,” said Sen. Todd Kaminsky (D-Long Beach), who favors the proposal. “That’s why it will be up the people to let their legislators know how they feel.”

“I don’t see the proposal having legs, certainly not in the upper house,” said Assemb. Robin Schimminger (D-Buffalo), referring to the Senate. “And there’s a lot of head-scratching in our house.”