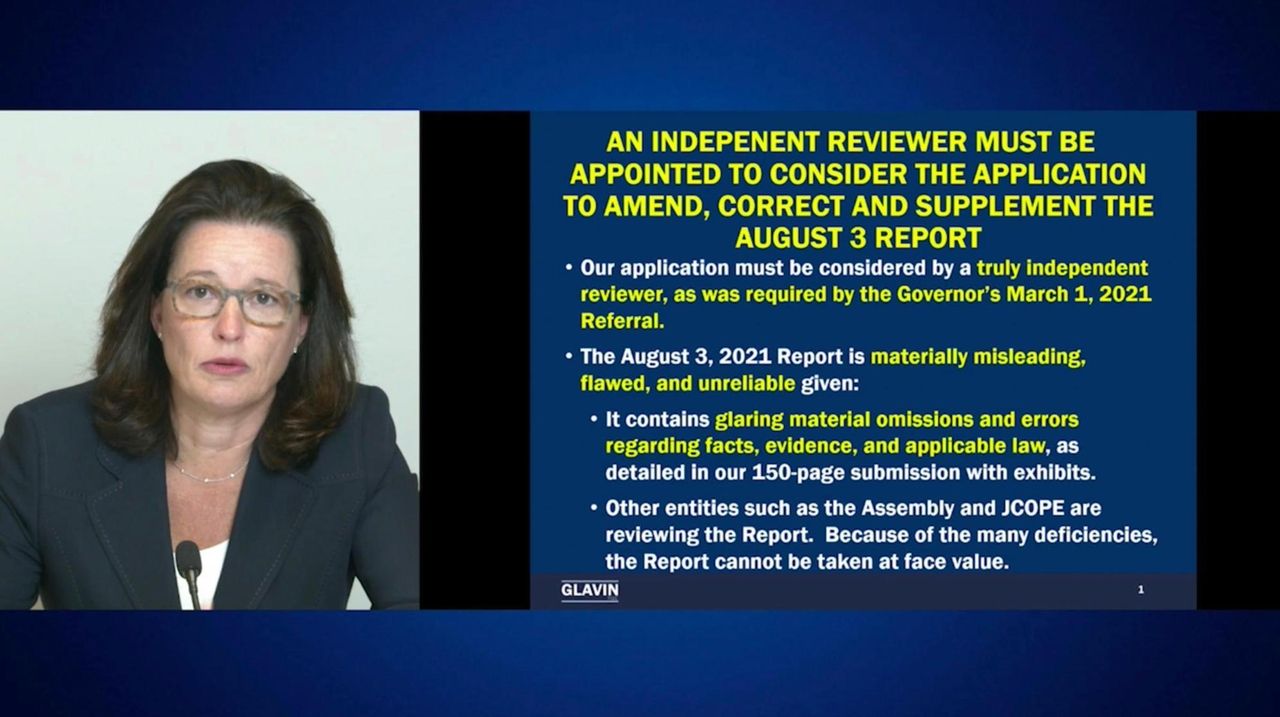 Former Governor Andrew Cuomo's lawyer Rita Glavin said she has quested an independent analysis of "errors and omissions" in the Aug. 3 report that accused Cuomo of sexual harassment and prompted his resignation shortly after. Credit: AndrewCuomo.com

ALBANY — Former Gov. Andrew M. Cuomo’s personal lawyer on Wednesday requested an independent analysis of "errors and omissions" in the Aug. 3 report from state Attorney General Letitia James that accused Cuomo of sexual harassment and prompted his resignation shortly after.

"The attorney general cannot be the person to consider our application to amend and supplement the report," said Cuomo's attorney, Rita Glavin. On Wednesday Glavin released a 150-page response to James' report.

Glavin accused James of a political conflict of interest in the investigation. Glavin also accused James of violating agreements she had with Cuomo before Cuomo issued his referral to the attorney general on March 1 to choose an independent law firm to probe the allegations. The firm was to investigate claims of sexual harassment reported by several women, most of whom worked in Cuomo’s executive chamber.

Glavin said James has refused to provide evidence to back up claims in the report and that has made it impossible to fully respond to the allegations. "What we submitted today was with both hands tied behind our back … because no one would give us access to the evidence," Glavin said.

Attorney general spokesman Fabien Levy called Glavin’s comments "another baseless attack by the former governor who resigned so he didn’t have to participate in an impeachment hearing."

"The most concerning part of today’s charade was the former governor’s attempt to stifle a legal criminal investigation into allegations that he used state resources for a book deal and personal profit," Levy said. He referred to the attorney general's separate investigation into whether Cuomo improperly used top aides to edit his 2020 memoir on leadership during the pandemic.

"This is not the Moreland Commission, and we will not be bullied into shutting down this investigation like the former governor did with that commission," Levy said. Levy referred to the corruption commission that Cuomo created in 2013 but which he shut down in early 2014 after legislative leaders agreed to some of his proposed ethics reforms.

Glavin had said earlier Wednesday that she expects the probe into the memoir to be dropped "once the full facts come out." "I am very confident that the governor committed no crime," she said.

James' office declined to address Glavin's request for an independent review or Glavin's accusations that James was politically conflicted and the report was flawed.

James' report concluded that Cuomo sexually harassed 11 women and that top Cuomo aides worked to discredit the allegation of at least one of the women.

"This man’s reputation was destroyed on Aug. 3," said Glavin. "What happened there was not meant to be independent, it was meant to be an ambush."

Although Cuomo resigned effective Aug. 24 and a former aide said he doesn’t intend to run for the office again, Glavin said addressing what she called mistakes in the report is still critical.

The report was "materially misleading, it is flawed and unreliable," Glavin said. "It misled the public, but in addition that report is being relied upon … by the state Assembly Judiciary Committee, JCOPE and going forward could be relied upon in civil lawsuits."

Glavin referred to the Assembly committee that was assigned to investigate impeachment of Cuomo when he was still in office. The committee continues its investigation and is expected to release its final report soon. Glavin also referred to the state Joint Commission on Public Ethics, which has also investigated its own policies and procedures after the staff's preapproval of Cuomo's book deal.

"Rather than providing a balanced analysis of what their investigation uncovered factually and the full circumstances surrounding the allegations, the investigators made affirmative factual findings and credibility determinations without gathering and analyzing all evidence available to them, and without explaining the material evidence they failed to obtain and why," Glavin said.

Glavin said James in a private meeting with Cuomo agreed not to be directly involved in the investigation because James had a political conflict of interest. At the time, Cuomo said he was running for a fourth term. James still hasn’t said if she will run for governor, but several supporters have urged her to consider a run.

James "violated the terms of that referral," Glavin said. "That referral from the governor did not confer jurisdiction on the attorney general to supervise or conduct the investigation."

Glavin, however, said "it is quite implicit" that selection of a independent law firm means James should not play a direct role in the investigation.

CNN suspends Chris Cuomo for helping brother in scandal
Gov. Hochul frequently invokes her faith in public addresses
Top photos from around LI from November 2021
Testimony details Cuomo aides' effort to discredit accusers
1:33
Doctors: Omicron variant is evidence COVID will likely be with us for years
1:58
Rep. Tom Suozzi announces NY gubernatorial run
Didn’t find what you were looking for?