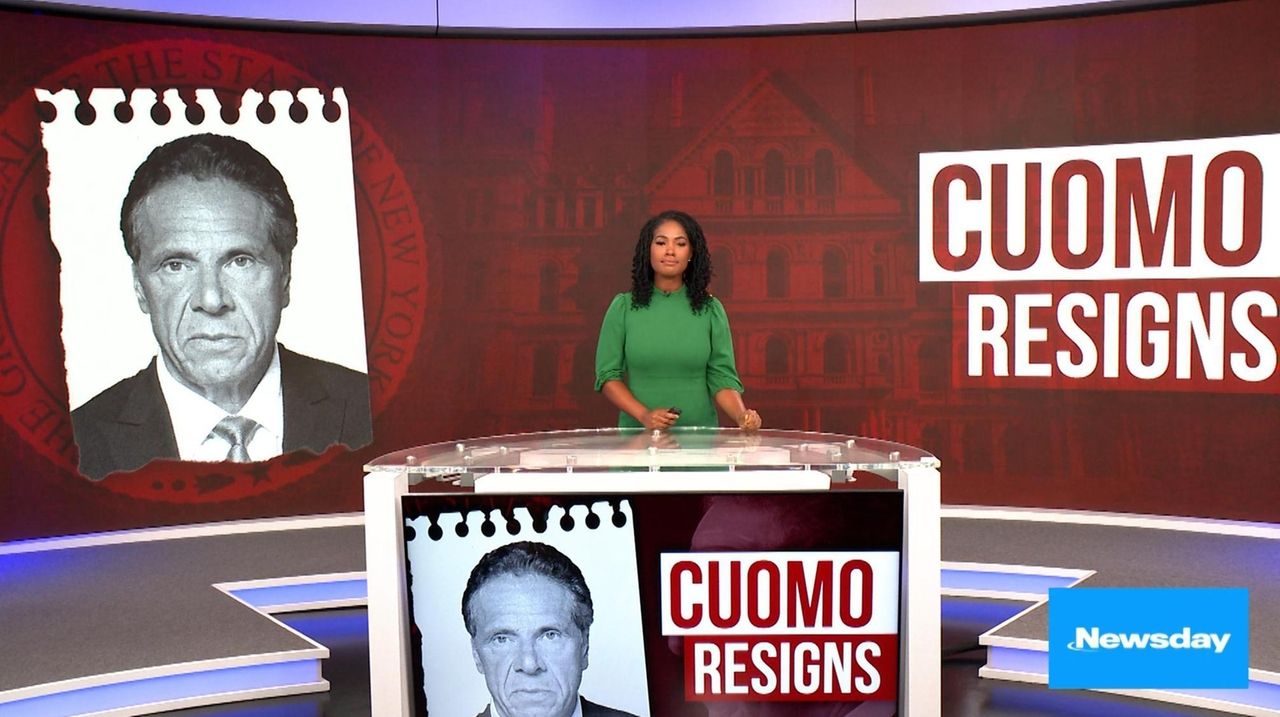 Gov. Andrew M. Cuomo, a third-term Democrat who had once vowed to "bring back integrity" to state government, said he could no longer serve because his tenure had become a distraction following an attorney general's report that found he had sexually harassed 11 women. Newsday's Faith Jessie reports. Credit: Newsday Studio; Zoom / Faith Jessie; File Footage; Facebook / Governor Andrew Cuomo

ALBANY — Andrew M. Cuomo, bowing to immense pressure to leave office following multiple allegations of sexual harassment and the threat of becoming the first governor impeached since 1913, resigned Tuesday as the 56th governor of New York. The resignation will be effective in 14 days.

Lt. Gov. Kathy Hochul, a Buffalo-area former congresswoman and Cuomo’s two-time running mate, will take over and complete the more than 16 months remaining in Cuomo’s term.

Cuomo, 63, who had once vowed to "bring back integrity" to state government, resigned in disgrace after a nearly 11-year tenure.

It was a dramatic reversal for a Democrat who some wanted to see as a presidential candidate a little more than a year ago. Cuomo said he could no longer serve because he had become a distraction following an attorney general's report that found he had sexually harassed 11 women. 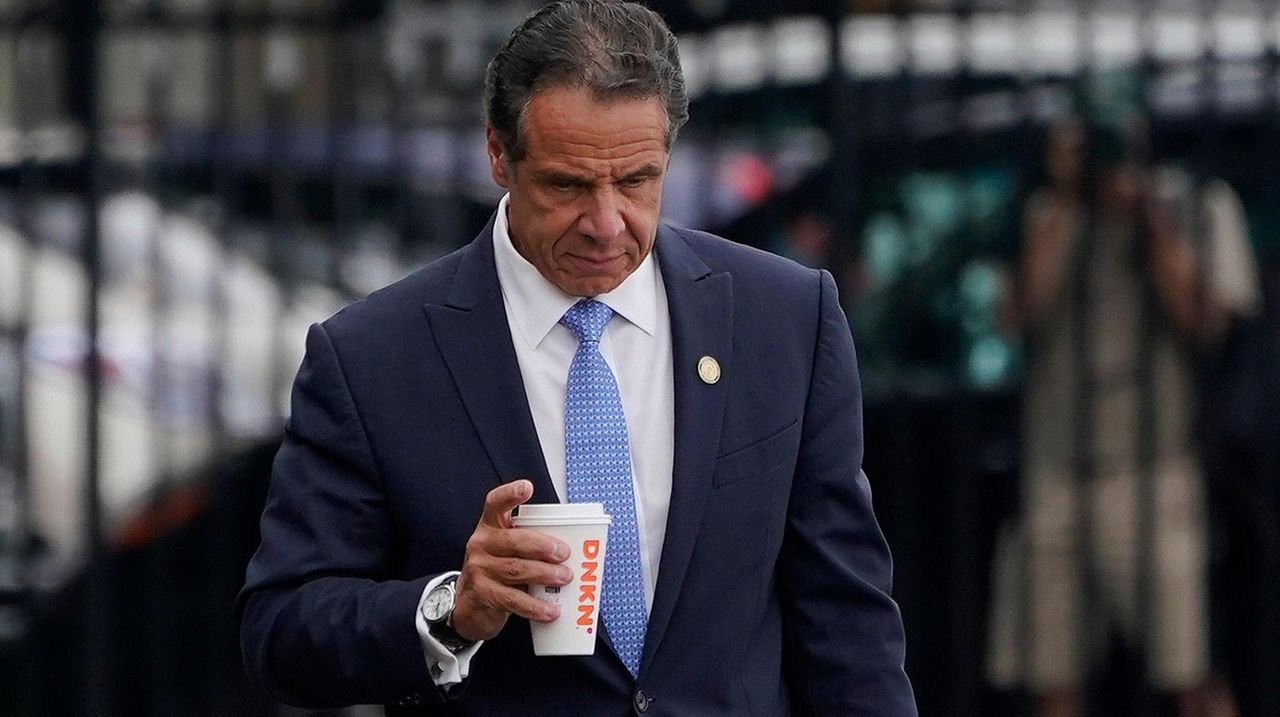 Notably, Cuomo's announcement came less than 24 hours after state Assembly leaders met and outlined a schedule which would have likely culminated in the governor being impeached by the end of August.

"I think, given the circumstances, the best way I can help now is if I step aside and let government get back to governing," Cuomo said in a 21-minute address from his Manhattan office.

Cuomo once said there was "no way" he'd step down. Instead, he will become the second New York governor to resign this century. Eliot Spitzer did so under pressure in 2008 after being caught in a prostitution scandal.

The governor had resisted calls from his own party leaders — even President Joe Biden — to resign and said he would not be distracted from his job.

But in the ensuing days, fast-moving developments continued to engulf the governor. One of the women filed a criminal complaint and Melissa DeRosa, his top adviser, resigned her position as secretary to the governor.

On Monday, the Assembly announced it would move swiftly, making it clear Cuomo faced the imminent possibility of being just the second New York governor ever impeached, following William Sulzer in 1913.

The Assembly probe was much wider than just the harassment claims; it also investigated nursing home deaths during the pandemic and Cuomo's $5.1 million deal for a pandemic memoir, along with other matters.

Just prior to his address, his attorney, Rita Glavin, held a 45-minute briefing in which she strongly criticized the attorney general's investigation and said the looming impeachment process "will not be fair" to Cuomo — foreshadowing what the governor would say just a few minutes later.

Cuomo called the investigations "politically motivated" and harassment claims mostly false. But he apologized if he ever touched or spoke to any of the women in a way that made them uncomfortable. He cited generational differences for his actions.

"In my mind, I have never crossed the line with anyone," the governor said. "But I didn’t realize the extent to which the line has been redrawn."

He said he accepted full responsibility and learned from his mistakes, but could not continue in office in a political environment that is "too hot" and "too reactionary."

"And wasting energy on distractions is the last thing that state government should do and I cannot be the cause of that," Cuomo said.

Speaking into the cameras and with his voice catching, he added: "I love New York and I love you and everything I have ever done has been motivated by that love."

In closing, the governor addressed his three adult daughters, saying, "I never would intentionally disrespect a woman or treat any woman differently than I would want them treated."

"Your dad made a mistake and he apologized and he learned from it. And that what life is about," the governor said. "I know political process is flawed … But don't give it up on it because government is still the best vehicle for making positive social change."

Moments after the governor’s announcement, Hochul said on Twitter. "I agree with Governor Cuomo’s decision to step down. It is the right thing to do and in the best interest of New Yorkers. As someone who has served at all levels of government and is next in the line of succession, I am prepared to lead as New York State’s 57th governor."

Cuomo had been one of New York’s most accomplished governors, spearheading a property-tax cap, legalization of same-sex marriage, stronger gun-control laws and a minimum wage hike. He crushed opponents during three successful gubernatorial campaigns and had been raising funds for a fourth run.

Amid the COVID-19 pandemic, his daily, televised briefings in 2020 skyrocketed his popularity, won him an Emmy Award and had some suggesting he replace Joe Biden as the Democratic presidential candidate. For some, his competent and professional appearances stood in contrast to then-President Donald Trump's handling of the pandemic.

Away from the cameras, Cuomo ran state government in a bullying style that cost him political allies and largely hid what was widespread discontent with the governor in political circles.

His style, described by his former top adviser as "two speeds: get along or kill," also served to keep critics largely silent in fear of retribution.

But the dam of silence began to break in December when a former aide alleged Cuomo had sexually harassed her. It broke wide open in February when a Queens assemblyman went public with a phone call in which he said Cuomo berated and threatened to "destroy" him because he was critical about the governor’s nursing home policies amid the pandemic.

Cuomo denied it, but the story of the phone call persuaded others to go public with stories of Cuomo bullying and harassment. Rapidly and steadily, a number of former and current female aides — some nearly 40 years younger than the governor — began pouring forth with complaints of sexual harassment.

That prompted calls for Cuomo’s resignation, which he staved off by consenting to allow Attorney General Letitia James investigate the claims. Soon after in March, the Assembly launched its impeachment inquiry while signaling it likely would wait for James to conclude her investigation.

After a five-month probe, James released her report just a week ago, finding the governor indeed had harassed 11 women.

The fallout was swifter and more damaging than the New York political world expected. Biden and other Democrats immediately called for Cuomo's resignation. The governor's once-soaring ratings plummeted to 28% in the latest poll.

Brittany Commisso, one of the women, filed a criminal complaint against Cuomo with the Albany County Sheriff’s Department. She alleged Cuomo groped her buttocks and breasts on more than one occasion at the Executive Mansion, the governor’s residence just blocks away from the State Capitol.

The governor maintained he committed no wrongdoing and that some of the allegations — including Commisso’s — never happened.

Cuomo and his lawyers contended James and her investigators were biased against him and had a "predetermined narrative" they wanted to fulfill. They complained about not getting an advance copy of the report before it went public.

At the same time, the Assembly accelerated impeachment proceedings, giving Cuomo until Friday to deliver any evidence he wanted considered. On Monday, the Assembly outlined a schedule that indicated it could vote on impeachment charges by the end of August.

Assembly Speaker Carl Heastie (D-Bronx) had been criticized by the political left and some of the women as moving too slowly on impeachment.

In the end, though, some said it was Heastie who dealt the final blow when he announced Cuomo had lost support of all the Democrats in the chamber and he outlined an impeachment schedule that signaled a vote would be coming within weeks.

"At that point, (Cuomo) had no options," said Hank Sheinkopf, a Democratic strategist who has worked for and against Cuomo on elections over the decades.

In a statement, Heastie said: "This has been a tragic chapter in our state's history. Governor Cuomo's resignation is the right decision. The brave women who stepped forward were heard. Everyone deserves to work in a harassment free environment. I have spoken with Lieutenant Governor Hochul and I look forward to working with her."

Biden said he "respected" Cuomo's decision but called it a "sad" conclusion to his tenure.

"He’s done a hell of a job. Both on everything from access to voting, to infrastructure, and a whole range of things that’s why it’s so sad," Biden said. Asked how Cuomo’s resignation impacted the Democratic Party, Biden said: "The impact is all on Andrew Cuomo."

It wasn’t immediately clear if Cuomo’s resignation would impact the criminal complaint against the governor or the impeachment proceedings.

The Legislature could still pursue impeachment — in part to prevent Cuomo to ever running from office again. A day earlier, Assmb. Charles Lavine (D-Glen Cove), who is chairing the impeachment committee, said that while impeachment itself may be "moot," there would be the "opportunity in the court of impeachment to prohibit him from ever again occupying a statewide office."

Neither Lavine nor other Assembly officials commented further on the issue Tuesday.

Cuomo is the scion of New York political royalty. His father, Mario, was New York governor for three terms, 1983-94, with Andrew serving as campaign manager and, for the first year in office, his top adviser.

Andrew Cuomo went on to serve in President Bill Clinton's administration as housing secretary. He came back to run for New York governor in 2002, but dropped out of a Democratic primary when it was clear he'd lose to H. Carl McCall.

His career was revived in 2006 when he defeated several rivals in a primary for attorney general, then bested Republican Jeanine Pirro in the general election. While in that office, Cuomo won praise for going after Wall Street corruption.

As attorney general, Cuomo also launched investigations that politically damaged two Democratic governors. One focused on Spitzer and a state trooper scandal. Two subsequent ones focused on Spitzer's replacement, David Paterson, and factored into Paterson's decision not to run for reelection in 2010, clearing the way for Cuomo.

AG report: Cuomo sexually harassed multiple womenThe findings, released by State Attorney General Letitia James, renewed widespread calls for the governor to resign — including from President Joe Biden, a longtime Cuomo ally. Timeline of harassment claims against CuomoHere are some key dates in the sexual harassment claims against Gov. Andrew M. Cuomo. Reactions to Gov. Andrew Cuomo's resignation Tweets from politicians and media concerning the resignation of New York State Gov. Andrew M. Cuomo. Photos: Andrew Cuomo through the yearsAndrew Cuomo has had a fairly long political career, from his time as U.S. secretary of Housing and Urban Development under the Clinton administration to New York state's 56th governor. Here are photos from his time in those roles, as well as prior.