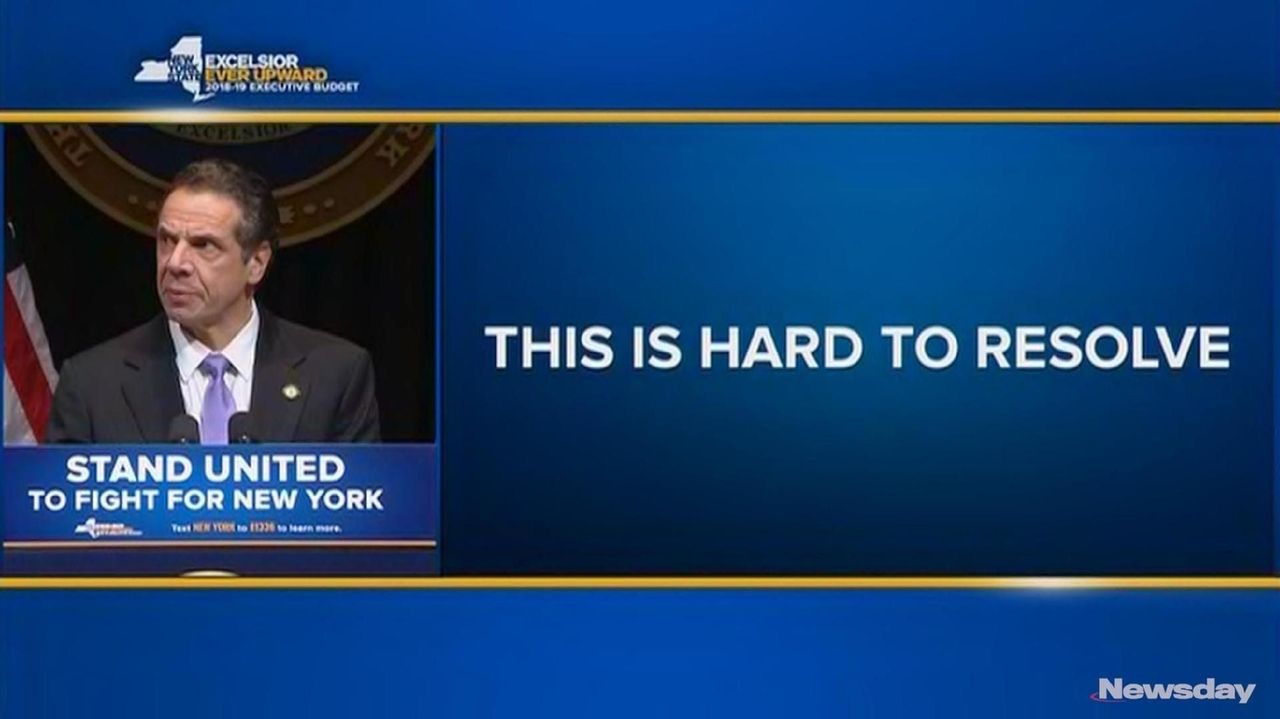 Gov. Andrew M. Cuomo detailed some of his proposals to cope with the new federal tax plan in his 2019 budget overview, delivered Tuesday, Jan. 16, 2018. He said this year's budget is going to be a challenge because of a $4.4 billion deficit and the new federal tax cuts. Credit: News 12 Long Island

ALBANY — With New York facing a deficit, Gov. Andrew M. Cuomo scaled back an expected spending boost for elementary and secondary education, proposing on Tuesday a 3 percent hike instead of a previously planned 4 percent jump.

Cuomo, a Democrat now in his eighth year, outlined his ideas for a $168 billion budget for the 2018-19 fiscal year, reflecting 2.3 percent growth while dealing with a deficit of $1.8 billion. School aid would increase $769 million. It previously had been promised to increase $1.2 billion.

But the governor targets other areas for cuts or freezes and calls for about $750 million in new taxes and fees as a way to cover the deficit.

Eyed for cuts: Community colleges, transportation, mental hygiene and state agencies. (Cuomo aides said the transportation decrease reflected a transfer of revenue to the Metropolitan Transportation Authority and didn’t reflect actual cuts. They added that the community college cut was attributable to an enrollment decline.) Further, he would freeze direct state aid to counties, towns, cities and villages.

And he called for a new “pre-licensing” course for those seeking a driver’s license; applicants would fork over $8.

Notably, Cuomo failed to roll out one of the keynote items he promised earlier this year: A plan to shift the collection of taxes from an income-tax-based system to a payroll-tax-based system. In theory, employers rather than employees would be taxed under the Cuomo idea, but the state would find a way to keep workers and businesses whole while reducing the amount New Yorkers send to the federal government.

Some called Cuomo’s idea a risky end-run on the new federal tax law which restricts one of the most popular deductions for those who itemize returns: the amount paid in state and local taxes.

“This is going to be a challenging year, my friends,” Cuomo told state legislators. “We have tremendous federal cuts, especially in health care and then we have pressing needs all across the state. So the budget as a budget is going to be difficult to resolve . . . ”

Later, the Democrat contended “Washington has hit a button and launched an economic missile” at New York. That notion irked some Republicans, who said the state should be more focused on cutting spending and taxes.

“Stop pointing the finger at Washington,” said Assemb. Dean Murray (R-East Patchogue). Noting that overall spending would increase nearly $4 billion under the Cuomo plan, he added: “You know what words were missing from the speech? Belt-tightening. Cutting. Reducing. We didn’t hear any of those words.”

Assembly Speaker Carl Heastie (D-Bronx) called the limited growth plan “sobering” and suggesting the Democrat-dominated Assembly might push to add more in school aid — as it traditionally does.

Cuomo said the deficit would be $4.4 billion if the state allowed spending levels approved last year to continue into fiscal 2018-19. By keeping state operations spending growth at 2 percent, the budget hole is closer to $1.8 billion.As expected, the governor tucked into the budget non-monetary initiatives, such as new sexual harassment policies, the codification of abortion rights in state law and methods for New York to participate in “early voting,” all of which he touted in his Jan. 3 State of the State address.

On ethics, Cuomo proposed requiring state lawmakers to seek an advisory opinion on any outside income and closing an election-law loophole that allows companies to skirt contribution maximums by forming an unlimited number of subsidiaries to channel donations.

Lawmakers are supposed to adopt a budget by April 1, the start of the 2018-19 fiscal year.