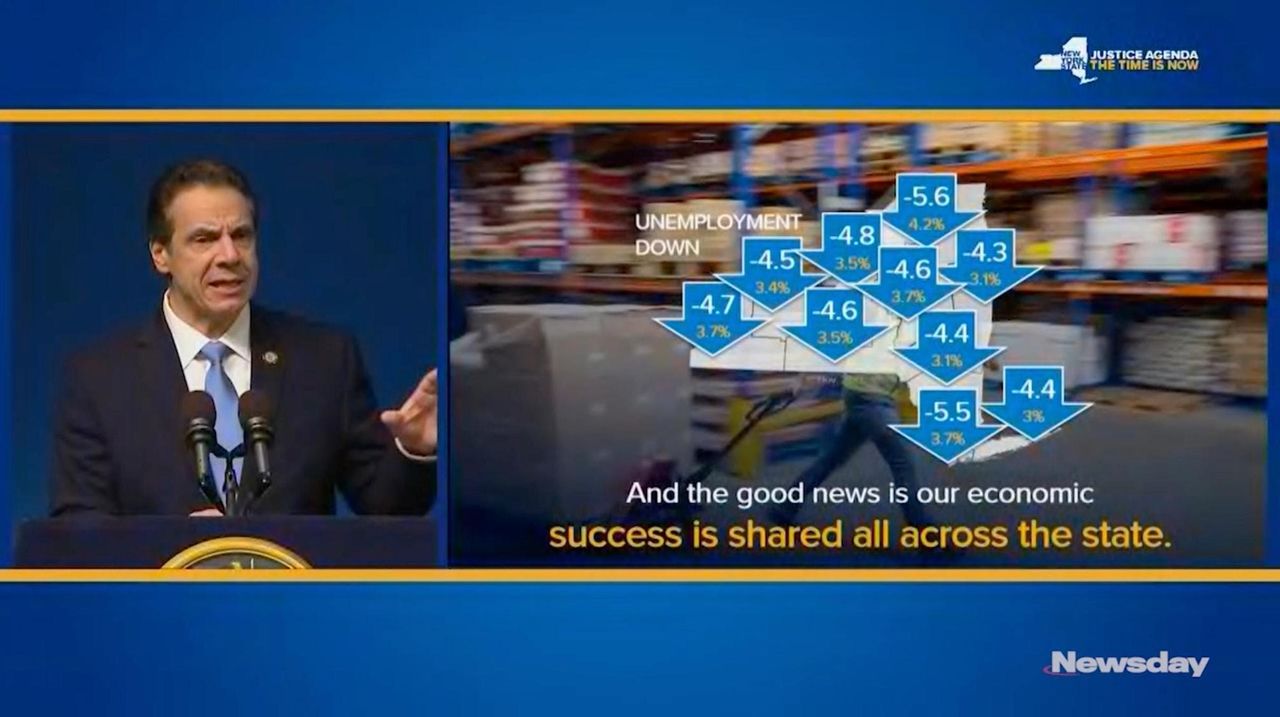 At his State of the State address in Albany on Tuesday, Gov. Andrew M. Cuomo talked about the economic development he's overseen across the state and that he proposes $150 billion in development in his third term, what he called the most aggressive development plan in the country. Credit: News 12 Long Island

Cuomo doubled down on clean energy with an initiative he called the Green New Deal, which would drastically increase his previous targets for renewables and carbon reduction. The plan calls for the state to get 100 percent of its energy needs from clean, carbon-free sources by 2040. Cuomo had previously set the target at 50 percent by 2030.

Cuomo called for $1.5 million in funding this year to make New York a hub for offshore wind energy, part of a plan for an eventual $200 million investment in port infrastructure for turbine manufacturing, assembly and shipping. “We want to locate the industry in this state,” he said Tuesday. “Let’s invest $1.5 million. It’s a real source for renewable energy and let’s do it this year.”

Solar energy installations also would increase significantly under the plan by some 6,000 megawatts by 2025 — double the previous goal.

Even as he proposed upping the commitment to green energy, Cuomo said he’d introduce legislation to provide $70 million for communities affected by retirement of old, fossil-fuel power plants “so those communities won’t shoulder the burden themselves.” Cuomo said. The legislation could address Long Island communities where LIPA has sued for lower taxes on less-used fossil fuel plants.

Cuomo also proposed legislation to ban oil-and-gas drilling off New York, one of the areas the U.S. Department of Interior has proposed opening to exploration.

The proposed budget would boost funding for the state Department of Environmental Conservation by $94 million, an increase of 7 percent.

Cuomo's spending plan would hold funding the Environmental Protection Fund at $300 million, the same as this year. This includes $38 million for solid waste programs, $88 million for parks and recreation and $153 million for open space programs.

Cuomo called the proposed ban on plastic bags a “common sense initiative,” to address the problem of bags hanging from trees and polluting waterways. Environmentalists have said a ban also should include a fee on paper bags.

The bag ban would include direction to the DEC to develop exemptions and reusable-bag giveaways to mitigate the impact on low-income New Yorkers.

Grocery stores and business groups have said they will oppose Cuomo's proposal, saying it will drive up costs for stores and consumers.

Beginning in January 2018, Suffolk County required retailers to charge 5 cents for disposable plastic and paper bags. Nassau does not limit use of the bags.

A proposal to address food waste, which Cuomo had put in his previous two budgets, was not included this year. The proposal would have required organizations that produce large amounts of excess food a year to donate edible items to food banks and recycle the rest through composting or anaerobic digestion. The proposal was opposed by Republicans who then controlled the State Senate and was supported by Democrats.

State spending on Medicaid would increase by $680 million, or 3.6 percent.

Cuomo said state health care funding has been relatively flat in recent years. But with federal changes to insurance rules, the increased state spending would “give the health care industry the help they need to stabilize while we fight off the federal attack.”

In reaction to the shifting makeup of the U.S. Supreme Court due to judicial appointments by President Donald Trump, Cuomo proposed codifying in state law the Roe v. Wade decision legalizing abortion nationwide.

He also would create a board to review deaths of women related to pregnancy and childbirth.

The proposed budget also would codify key provisions of the federal Affordable Care Act, including the ban on insurance limitations for pre-existing conditions. Cuomo also wants to ensure that all insurance policies sold in New York cover 10 essential benefits defined in the ACA.

The Higher Education Services Corporation, which runs the state’s financial aid programs including the Tuition Assistance Program and the Excelsior Scholarship, would get an increase of $67 million — more than 6 percent.

The Excelsior Scholarship, a supplemental aid program, covers the cost of tuition for eligible full-time students attending public colleges and universities. Cuomo’s proposal provides funding for the third and final phase of the program. He would raise the income eligibility ceiling to allow students from households making up to $125,000 to apply for the 2019-20 school year.

Cuomo also called for the passage of the DREAM Act to make so-called Dreamers, brought to the country illegally as children, eligible for state financial aid, including the Excelsior Scholarship.

Cuomo also is calling for protections for student loan borrowers. For example, he would require companies servicing student loans held by New Yorkers to obtain a state license.

Cuomo included accountability measures for for-profit college, including requiring them to report their funding sources and salaries of senior leadership, and to spend at least 50 percent of their revenue on instruction and learning.

Cuomo wants to invest an additional $325 million in research and development programs that support biotechnology, advanced manufacturing and infrastructure to create more high-paying jobs. State funds would be matched by private dollars, he said.

He proposed a ninth Regional Economic Development Councils’ competition in which 10 regions vie for up to $750 million in tax credits and grants. In the past eight years, the Long Island council has secured $639.1 million for 791 projects.

Under Cuomo’s plan, downtowns would again compete for $10 million in revitalization grants. He said up to $100 million would be distributed statewide in 2019-20. Westbury, Hicksville and Central Islip previously have won grants.

Tourism marketing, including I Love NY promotions, would receive $59.5 million next year as more visitors come to the state. In 2017, nearly $109 billion in economic activity was generated by a record 244 million tourists.

He called for expanding an initiative to increase the number of state contracts awarded to businesses owned by minorities and women. The proposed changes include adding workforce participation goals, making it easier to win a first contract and preventing fraud in the program.

Cuomo said such businesses receive 29 percent of state contract spending or $2.6 billion, up from less than 10 percent or $100 million before he took office nine years ago.

Long Island stands to benefit from this state spending, according to Kevin Law, president of the Long Island Association business group. He said, “The governor’s further investment and commitment to economic development is good news for Long Island as we are poised to tap many of these initiatives.”

Cuomo budget proposes 3.6% school aid hikeThe $175.2 billion budget proposal includes legalizing marijuana and making the state's 2 percent property tax cap permanent. LI would lose $15M in state aid in Cuomo's budgetThe plan would disqualify certain towns and villages from receiving money. His administration no longer wants to provide the aid to communities where it covered less than 2 percent of expenditures in 2017. Officials: Cuomo's LI school-aid pitch a good startEducation leaders and local legislators say they will work to get more than the 2.03 percent increase in operating aid for Long Island's schools that is in the governor's budget proposal for 2019-20. Cuomo gives a big push to legalized marijuanaALBANY — Gov. Andrew M. Cuomo on Tuesday propelled the effort to legalize recreational use ...