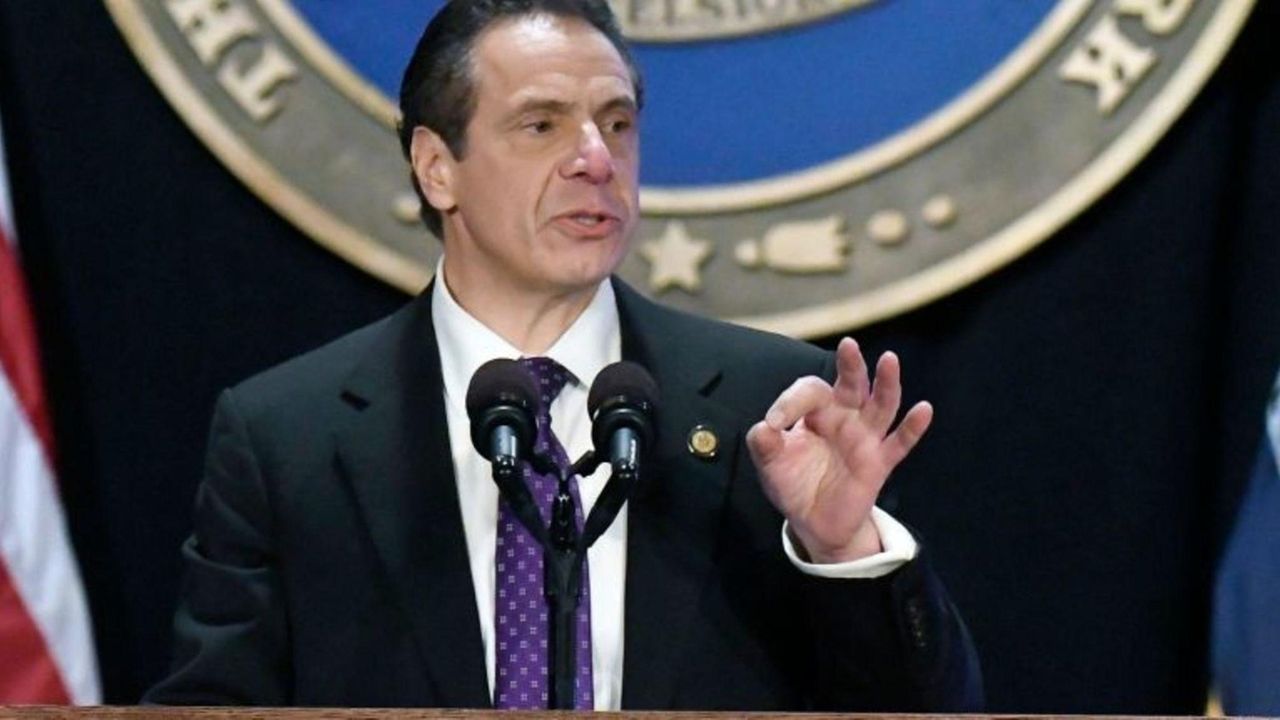 Taking aim at Washington, Gov. Andrew M. Cuomo used his State of the State address Wednesday, Jan. 3, 2018, to announce he will sue the federal government over the recently approved tax plan, saying it unconstitutionally burdens New Yorkers. Cuomo, a Democrat in his eighth year in office, said the plan amounts to "double taxation" because it restricts individuals' ability to deduct from federal taxes the amount they pay in state and local property taxes, ending standard tax-code practice. Credit: News 12 Long Island

Cuomo, a Democrat, peppered his annual State of the State address with vows to fight President Donald Trump and Congressional Republicans on not just the tax plan but also immigration, abortion, the environment and health care. The governor, said by some to have national ambitions, sought to position New York in opposition to a Trump administration that he portrayed as “spreading division among our people.”

“Our federal government is working to roll back so much of what we have done,” Cuomo said. “We cannot and must not let those things happen . . . In the immortal words of John Paul Jones, we have not yet begun to fight.”

The first step, the governor said, was to sue to upend a new tax law that restricts individuals’ ability to deduct from federal taxes the amount they pay in state and local taxes, ending standard tax-code practice. Cuomo said it amounted to “double taxation” and a political move to hurt high-tax states led by Democrats.

In conjunction, the governor said he would soon announce a “major shift” in the state tax code that could “restructure the current income and payroll tax system.” He didn’t provide details; aides said those would come when the governor proposes a state budget, expected Jan. 16. One analyst said this could focus on partially replacing the state income tax with a payroll taxes on employers, which business can deduct.

A key Republican sounded skeptical about the threatened lawsuit.

“I don’t see a legal basis for doing so,” Senate Majority Leader John Flanagan (R-East Northport) said. He faulted Cuomo for putting too much emphasis on Washington and not enough “how we run our own government.”

Cuomo took a shot at Trump, saying the federal government is pitting rich versus poor and middle class, “black versus white, red states versus blue states,” concluding “and much harm has been done.”

Another Republican bristled at the D.C. focus and said Cuomo’s speech sounded like a “preview to his presidential campaign.”

“Rather than address the oppressive state taxes imposed on hardworking New Yorkers, he chose to blame Washington,” said Assemb. Ray Walter (R-Amherst). “Getting our own house in order should be his number one priority, not D.C. politics.”

Cuomo’s eighth State of the State address occurred against a backdrop of widening state deficit that stands at $4 billion and counting, a potential $2 billion revenue loss in federal aid, a beleaguered New York City subway system, an uneasy State Senate and an flurry of upcoming political-corruption trials. And it’s an election year.

In the past, Cuomo often used the address to announce major construction projects. Not so, this time. For example, he touched lightly on fixing the subway crisis.

In the speech, Cuomo reiterated a combination of proposals he had rolled out in the previous weeks and revived some proposals from previous years. Those included:

Highlights of Gov. Andrew M. Cuomo’s annual State of the State address. He said he would: