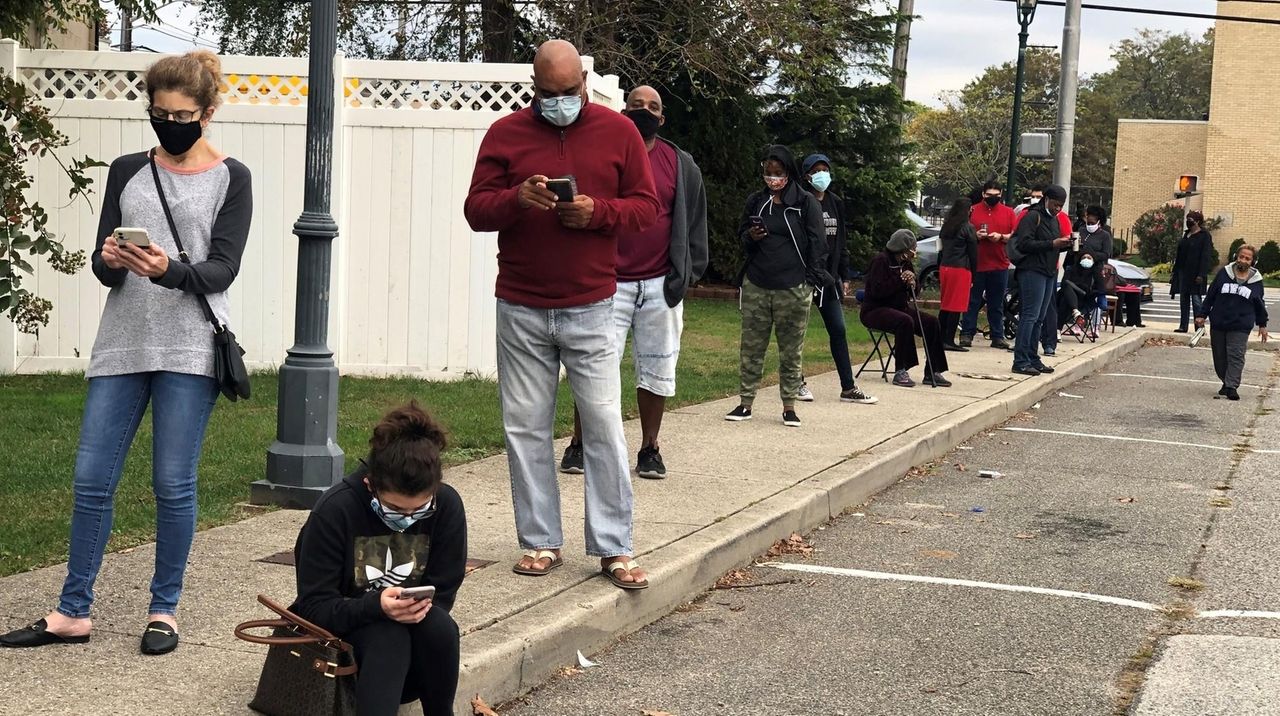 While some Long Islanders plan on taking advantage, not everyone is comfortable with in-person voting amid the coronavirus pandemic. That’s led to a large spike in requests for absentee ballots in Nassau County. Newsday's Cecilia Dowd has the story. Credit: Howard Schnapp

ALBANY — Early voting in New York State begins Saturday, and the increasingly popular option may provide as much as 20% of the turnout for the general election this year, officials said.

More than 2.2 million Americans have cast ballots in nine states through in-person early voting as of this week with two weeks left to vote early, according to the U.S. Elections Project run by University of Florida Professor Michael McDonald.

In New York, early voting begins Saturday and runs through Nov. 1 at selected polling places in each county. The early voting sites will offer evening and weekend hours and are posted on the websites of the Suffolk County and Nassau County boards of election. A voter may also look up their early voting sites on a state Board of Elections portal.

Voters may cast a ballot at any early voting site in their county, so they can vote near work or elsewhere, not just the site closest to home. Early voting gives voters a way to vote in person, which, like the great increase in use of mail-in voting, can allow New Yorkers to avoid crowded polls and the potential threat of spreading the coronavirus on Election Day, Nov. 3.

Voters also may deposit an absentee ballot at any of the early voting sites to quickly make sure their ballots are received.

"It is very popular among some voters," said M.V. Hood, a political-science professor at the University of Georgia who has researched early voting. "In the case of New York, it is going to be interesting to see how many people use early voting … what we usually find in other states is that it tends to grow in popularity."

Gov. Andrew M. Cuomo said Thursday that any polling places that are in "microclusters" of outbreaks of the coronavirus in small geographic areas will continue to operate during early voting and on Election Day.

Melissa DeRosa, secretary to the governor, said all polling sites have strict protocols on cleaning facilities and equipment as well as wearing masks and social distancing.

"For most people who do vote early, they are strong partisans and their minds are already made up," he said.

New York State approved early voting in 2019 and became the 39th state to allow some form of early in-person voting. The aim of the State Legislature was to improve New York’s notoriously low voter turnout. New York’s turnout for the 2016 presidential election was 57%, which was the eighth worst in the country, according to the U.S. Census Bureau.

In 2019, early voting statewide accounted for 9% of the total turnout, which was 5.56% higher than four years before. Suffolk and Nassau counties saw similar gains in 2019.

"By all indications," the state Democratic and Republican analysts stated, "early voting was successful."

But estimating turnout for early voting this year is hard to predict, particularly because a presidential election draws more voters, officials said.

"I think we maybe will get 20% of the total turnout, but it’s hard to know," said Anita Katz, Democratic commissioner of the Suffolk County Board of Elections.

Katz said the shortest lines at early voting sites are midafternoons on weekdays. Republican Suffolk County commissioner Nick LaLota also noted that voters should realize that because of social distancing requirements to protect against the spread of COVID-19, lines may appear to be long and even extend outside the polling place door, but that’s because everyone will need to keep at least 6 feet apart.

LaLota said voting should still take a voter no more than 15 to 20 minutes. That could be less at early voting sites, which usually have shorter lines.

A state Board of Elections analysis also showed the first day of early voting and the last day had the biggest turnouts.

Although it can’t be directly attributed to early voting, the total turnout in each county increased slightly in 2019 compared with 2015 when there was no early voting, according to the state report. Suffolk’s turnout increased 5.49% and Nassau’s increased 3.23%

In that 2019 election cycle, Nassau County led the state in the total number of early votes cast. The breakdown of early voters was evenly split between Democrats and Republicans.

"Having early, in-person voting and having an option for dropping off mail-in ballots are really helping New York to adjust to the pandemic for election purposes, which is a great, unexpected benefit," said Sean Morales-Doyle, deputy director of the Voting Rights and Elections program at the Brennan Center for Justice at New York University Law School. "The pandemic is making it clear to everyone the benefit of these laws because now they benefit everyone."

Any registered voter may use any early voting site in their county.

Here are the early voting hours and sites:

Yes We Can Center-New Cassel