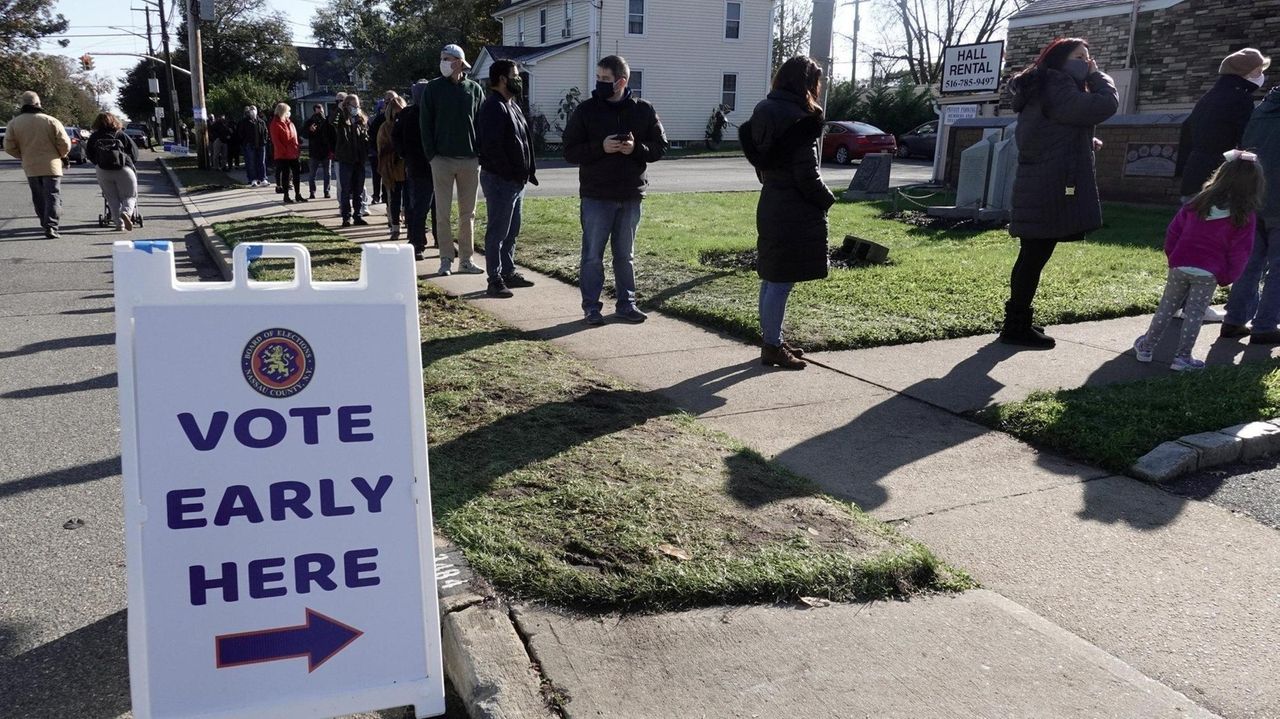 ALBANY — More than 1.5 million voters statewide took advantage of early voting last week as an option that could substantially reduce crowds on Election Day and limit the chance of spreading the coronavirus. But the surprising crush of voters also revealed some shortcomings in the process.

Sunday is the last day for early voting before the Nov. 3 election. Nassau and Suffolk polls will be open from 10 a.m. to 3 p.m.

Early voting was adopted in 2019, but was lightly used. COVID-19 changed that. State officials promoted early voting along with this year’s expansion of absentee or mail-in voting as a way to limit lines on Tuesday, the traditional Election Day.

Voters, however, flocked in surprising numbers to early voting sites and waited in lines extended by mandatory social distancing, frequently in cold and drizzle and often for an hour or more. Although long lines at early polling sites were reported statewide, the longest queues were in New York City and on Long Island, according to the League of Women Voters.

The league said that lessons learned included a need for more state funding to allow county boards of election to hire enough staff and to buy enough polling machines to meet the maximum 30-minute wait that is set in election law. League staff also called for separate lines for elderly and disabled voters, better signs and frequent announcements that voters seeking to drop off their absentee ballots could go directly to drop boxes, and creating more sites than the minimum set in law of one early voting site per 50,000 registered voters in each county.

"We expected a large turnout, but I don’t think I expected it this big," said Laura Ladd Bierman, executive director of the League of Women Voters of New York State.

Statewide, more than 1.6 million New Yorkers voted by the end of Thursday, with the big final weekend yet to be counted. Interest in early voting never waned: The first day, Saturday, Oct. 24, drew 212,243 voters statewide at what traditionally is the high point of voting, along with the final Sunday. But more than 200,00 voters continued to vote each day after that, with a high of 329,499 on Wednesday and 281,766 on Thursday. That could mean that 20% of the total projected 2020 voter turnout may have voted in the nine days of early voting.

The reasons early voting has in many places attracted 10 times the volume in 2019 are becoming clear, according to election workers and voter advocates. Presidential elections always drive the highest turnout and the COVID-19 pandemic prompted many to find ways to avoid crowded Election Day poll sites. Many voters took advantage of the state’s expanded mail-in voting process, but chose to drop off their ballots at early polling sites rather than trust the U.S. Postal Service to deliver the ballots on time. Also, a contentious presidential race has amped up voter enthusiasm in both major parties.

Voters, election workers and state and local officials deemed early voting a success in a year in which government was pushed to its limits to deliver. And voters rolled with the glitches, officials said.

Among them was Michael Karp. He waited almost two hours in a line to vote in West Hempstead on Oct. 24. By the time he arrived at 7:30 a.m., he was 15th in line for the polls that opened at 9 a.m. By the time he cast his ballot, there were 300 voters in line.

"It was worth it," said Karp, 61, of Malverne. "I think more hours and more sites would help."

Concern about mailed ballots and an uncommon zeal to vote in this election was a big motivator for Michael and Tricia Luby of New Hyde Park.

"With all of the publicity concerning mail-in ballots this year, we were thrilled with the opportunity to safely vote early in person," said Michael Luby, 67. "My wife described it as the most important vote she has ever cast."

"We agreed it was a very smooth process and definitely would do it again," he said. They arrived at St. Paul’s Recreation Center in Garden City a half-hour before the polls opened and were done by 9:40 a.m. on Oct 24.

Karp’s and Luby’s reasoning mirrors that of many voters nationwide.

"I think some of the early surge came from a group of voters who did not want to vote by mail, wanted to vote in person, and wanted to get their vote ‘banked’ early in the process to leave nothing to chance," said M.V. Hood, a political-science professor at the University of Georgia who has researched early voting. "Of course, it is already popular with many even before this election cycle."

If trends in other states continue, New Yorkers can expect counties to offer more early voting sites and longer hours in future elections to serve more voters, according to tracking of states by the National Conference of State Legislatures. Currently, 43 states and the District of Columbia offer in-person early voting.

Early voting periods in other states are as long as 45 days and the average is 19 days, compared with New York’s 9-day period, according to the NCSL. New York law sets the minimum number of sites — one for every 50,000 registered voters in the county and at least seven sites — and a minimum of 60 hours of operation including the weekends.

Other states have as many as one early polling site per 10,000 voters and require up to 12 hours of voting each day. Vermont even offers mobile sites.

"I think this justifies early voting and justifies extension of early voting," said Bierman, of the League of Women Voters. "Imagine if there was no early voting. Imagine how long the lines would be on Election Day."

Voters' guide: See the candidates who will be on your ballotMeet the candidates and see where they stand on issues, whether you're voting by mail, voting early or voting on Election Day. Answers to your questions on how to vote in NovemberThis year, any voter could have received an absentee ballot if they were concerned about the spread of COVID-19 at polling places.