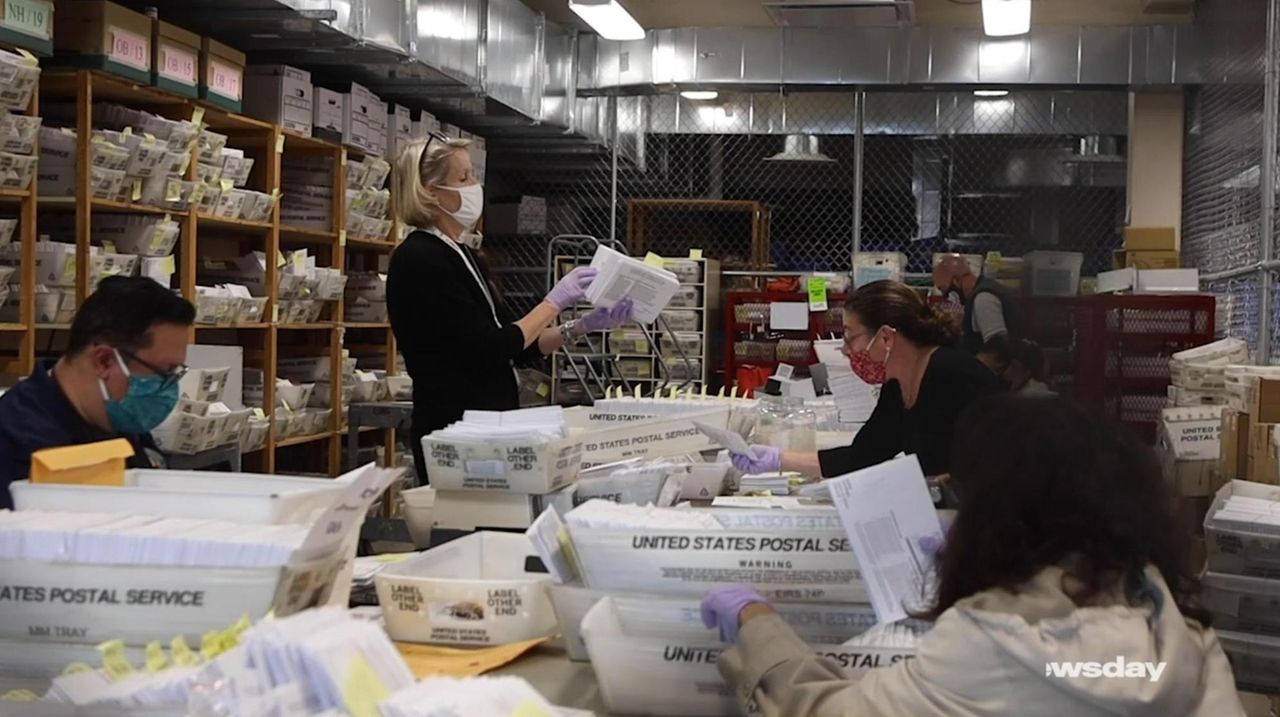 With the presidential race still undecided, we talked to an expert about President Trump’s claims of voter fraud and visited the Nassau County Board of Elections to see how ballots are kept secure. Credit: Howard Schnapp

ALBANY – Mailed-in ballots that could determine many elections in New York State are being kept in locked rooms under police guard, and every step in handling the paper ballots is done by bipartisan teams, according to detailed security requirements in state law.

"We did an impound" of absentee votes, said Anita Katz, Democratic Suffolk County elections commissioner. "There has been a police officer assigned here from Election Day forward, 24-7, at the door where the absentee ballots are … and will be there until we certify them. It doesn’t get much more safe than that."

In Nassau County, the ballots are locked in a room with two locks. Each party has one key and both must be present in order to open the door.

"Our absentee ballots have been under bipartisan lock and key since they started coming back weeks ago," said James Scheuerman, Democratic commissioner for the Nassau County Board of Elections. "We added chain link security fencing around our sorting area a while back to further limit access to the paper. We asked increased public safety patrols around our facility where the absentees are housed and since we are under impound, we have a police officer here at night when we are not. Every step of the process is bipartisan."

Once the counting begins, on Nov. 10 at the earliest to allow absentee ballots cast on or before Tuesday to be received, every step must be overseen by a bipartisan team, under state law.

"We watch each other," Katz said. "Both commissioners have to vote … it takes two commissioners to throw out a ballot. It’s both or nothing. Either we both agree there is something wrong with the ballot or it’s good and it gets counted."

If a candidate or party disagree, they can still take the disputed ballots to court. There, judges would hear arguments from lawyers for candidates or parties on every contested issue in every ballot before ruling.

"It makes it cumbersome," Katz said, "but New York has a lot of safeguards."

Under state law, county election officials "shall take all steps necessary to ensure that the voting systems and election processes entrusted to them are protected against errors, accidents and malicious or fraudulent manipulation."

Detailed security measures include securing a copy of voter registration lists "at least 25 miles away from any place where the original is housed." There is also a complex provision in law for use of computer passwords: "Internal security procedures shall require the frequent changing of passwords … if at any time the county board discovers that any password has been lost, shared or otherwise compromised, all passwords shall be changed."

"County boards shall adopt security procedures which restrict and document all access to voting systems, computer systems, software, firmware, system components, programming, test materials and any other ballot creation, counting or other system components," according to state election law. "All … post-election testing and canvassing/recanvassing, shall be conducted by bipartisan teams and be performed in secure, restricted-access space, and logs shall be maintained indicating task/staff assignments, time in and out, security password change dates and other such pertinent data."

New York law is meticulous in protecting the vote and such measures have helped prevent widespread fraud, despite concerns by voters fueled by weeks of claims by President Donald Trump, according to numerous academic and government studies.

"Mail ballots have a long history in U.S. elections, and are a safe and secure way to vote," said Patrick R. Miller, a political science professor at the University of Kansas. "Though, of course, it's a different way to vote than just showing up at the polls, and that presents different challenges for voters like navigating deadlines, the postal service, envelopes, signatures, and such. So, there are some unique ways that votes can be disqualified there that you don't face with in-person voting."

In most years, "there is no real partisan difference in mail ballots, and often times Republicans have done better with them," Miller said. "But this year, far more Democrats requested them than Republicans, probably due to the partisan gap in COVID concerns … But states are following their rules on these ballots, and we're seeing that process play out in front of us."