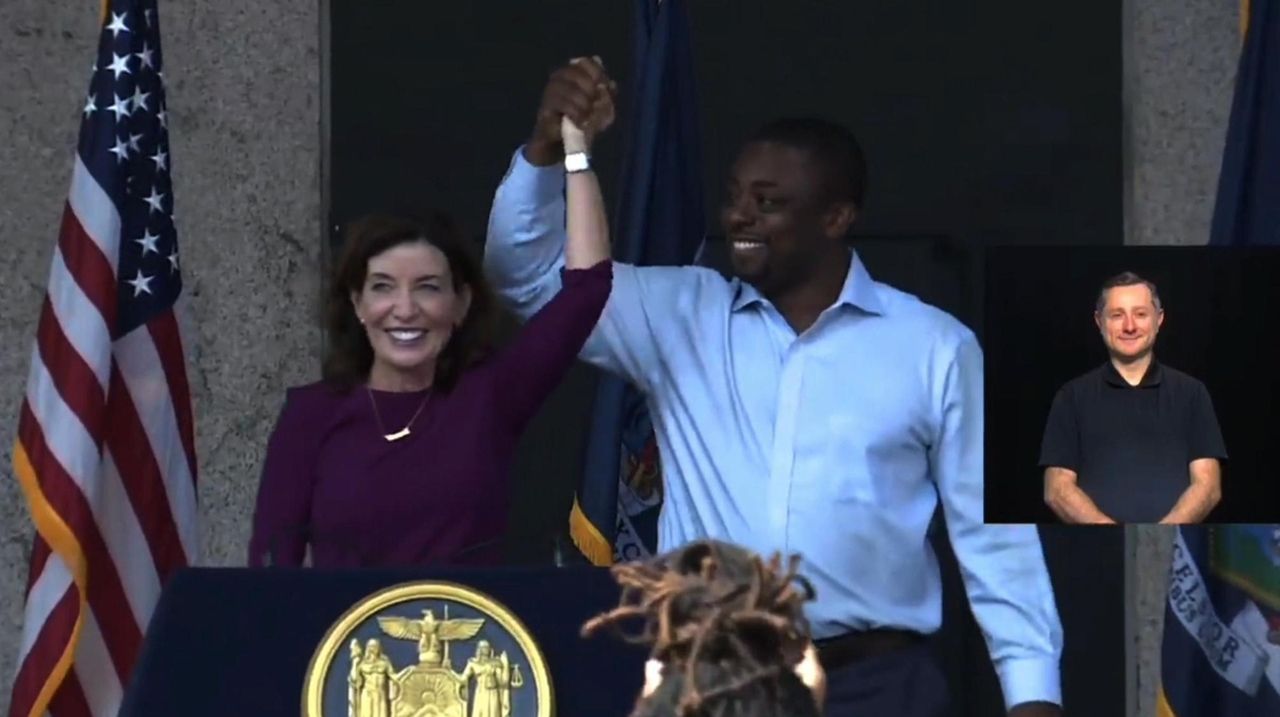 ALBANY — Gov. Kathy Hochul on Thursday publicly introduced her choice for lieutenant governor, Sen. Brian Benjamin of Harlem, who provides strong progressive credentials for the Hochul administration and balance for Hochul’s 2022 campaign for a full term.

"It’s not about any of us, it’s about all of us," Benjamin, 44, a Democrat, said outside the Adam Clayton Powell state office building on 125th Street in Harlem. "Our community needed government to work, and that’s what we will do for New York state."

Benjamin pledged to work on issues such as stemming gun violence and addressing homelessness, affordable housing and the coronavirus pandemic, including rent relief for thousands of New Yorkers.

He said government should help give young people reasons to have faith in their future, to have faith that hard work will give them a life they might not think possible.

Benjamin said he learned of that hope from his mother and stepfather, who sat in the front row.

"They taught me to show up every day, to work hard, it doesn’t matter what title you have," he said. "What matters is what’s in your heart, what do you believe? What are you willing to fight for. That’s what I learned from my parents."

Benjamin thanked Hochul, calling her "my friend, my sister, my governor, Kathy Hochul!"

Hochul called Benjamin her "dear friend," a partner who worked with her on the streets of Harlem to register voters and get people vaccinated against COVID-19.

Hochul said Benjamin is her "partner, someone who will work with me side by side, in the trenches … in every corner of New York state, with a real focus on New York City."

The announcement had the feel of a lively campaign rally. It was held two blocks from the Apollo Theater and hip-hop and R&B played through the public address system.

Dukes called Thursday a historic day for Harlem and its residents.

"Let me tell you, New York: You have a man of integrity, a man of compassion, a man of love," she said.

Benjamin is the senior assistant majority leader in the Senate under Senate Majority Leader Andrea Stewart-Cousins. He is among a cadre of young progressives who helped pass criminal justice legislation that includes ending bail in most cases so poor, often minority, defendants no longer languish in jail. The bail law is a flashpoint in New York politics as a prized win for liberal Democrats as well as a target for Republicans who say it releases dangerous people into communities.

Benjamin will be sworn in in September, timing that will allow a special election to be held to fill his Senate seat in Harlem.

Hochul has promised the lieutenant governor will have his own portfolio of projects, but that rarely happens.

"If you want to be a lieutenant governor or a Navy SEAL, no matter what they say you have to do it," said David A. Paterson, the state’s first black lieutenant governor who rose to chief executive when Gov. Eliot Spitzer resigned amid a prostitution scandal.

Still, Paterson said Benjamin brings much to the table that will help Hochul behind the scenes in governing and in campaigning.

Paterson noted Benjamin was a business major at Brown University, graduated from Harvard Business School and then ran his own development company to build homes for low-income residents. "So if you are progressive, that may make you leery," Paterson said.

But Benjamin has also been a leader for progressive measures. "He has a kind of rare combination of skills, because he operates well in both environments," Paterson said.

Although he has deep roots in Harlem and the rest of Manhattan — his backers include former Rep. Charles Rangel — Benjamin isn't well established yet in Brooklyn, where the larger Black vote could be pivotal in any 2022 primary.

But Paterson, the son of Basil Paterson, who was one of the Harlem lions that once ruled Black Democratic politics in New York City, said Benjamin has important contacts in Brooklyn.

"He’s got Manhattan, but he knows Brooklyn," Paterson said. "I think he will really flourish doing the job."