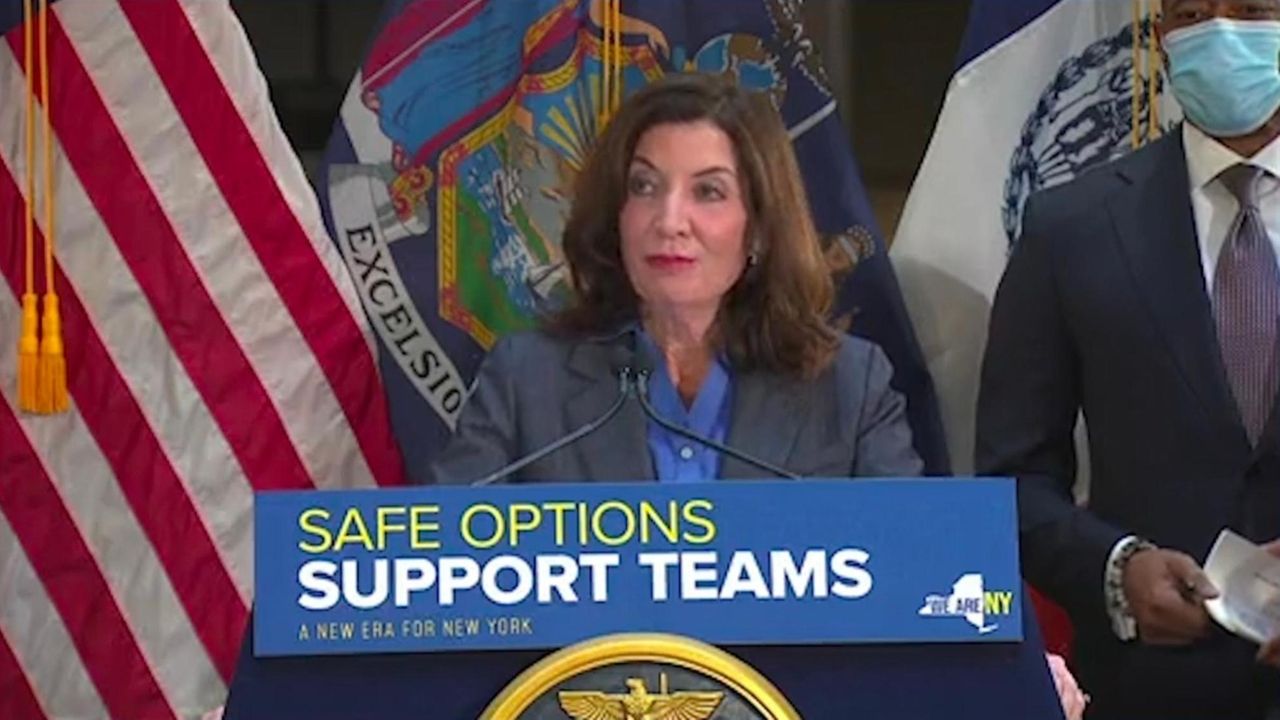 The state will dispatch social work teams to help move the homeless out of the subway system and into housing, Gov. Kathy Hochul and Mayor Eric Adams said in joint announcement Thursday.

The city will increase police inspections of subway stations and on trains as well, part of an effort officials said is intended to encourage riders back on the trains.

Hochul said the state would pay for five teams of eight to 10 social workers and medical professionals to work throughout the system to engage with homeless individuals and get them into shelters. The Democrat called them "S.O.S." teams, for "Safe Options Support."

"For the first time, we’re going to create teams of trained professionals, who will be embedded here, build relationships, develop trust" with homeless individuals, Hochul said at the event with Adams at the Fulton Street subway station in Manhattan. "We’re going to get them the support they need, get them into shelter and ultimately into housing."

The initiative was one of many proposals contained in the governor’s State of the State address Wednesday at the State Capitol. It wasn’t immediately clear when the teams would be deployed. The Hochul administration said the approach had been "piloted" earlier in the pandemic but now is being expanded.

Adams, also a Democrat, embraced the initiative. The governor and the mayor also said the plan demonstrated a new cooperative spirit between the city and state, in contrast to the constant squabbling of their predecessors, Andrew M. Cuomo and Bill de Blasio.

"This new plan also frees up our officers to focus on crime, and not be the street sweepers, sweeping men and women who are homeless off our system," said Adams, a former policeman. "We need to be clear here: We will not allow our police officers to have unnecessary engagement with homeless individuals and those petty issues that will cause negative encounters with riders."

NYPD will deploy more patrol officers to inspect stations and transit officers to ride the trains, officials said. It won’t require new officers but rather moving current ones from desk jobs, the mayor said.

Overall subway crime has declined along with a steep ridership drop during the pandemic. But high-profile violent incidents and a rise in murders have sparked political attention — Adams, in his mayoral campaign last year, promised to increase inspections.

The New York Civil Liberties Union blasted the idea of increasing police presence in the subway system while not directly addressing Hochul’s teams of social and medical workers.

"The NYPD should not, under any circumstances, be first responders to people in need of clinical expertise," said NYCLU Executive Director Donna Lieberman. "Mental health crises should be addressed with a trauma-informed response, not an approach that inflicts further trauma and endangers the lives of the very people the NYPD is supposed to serve."