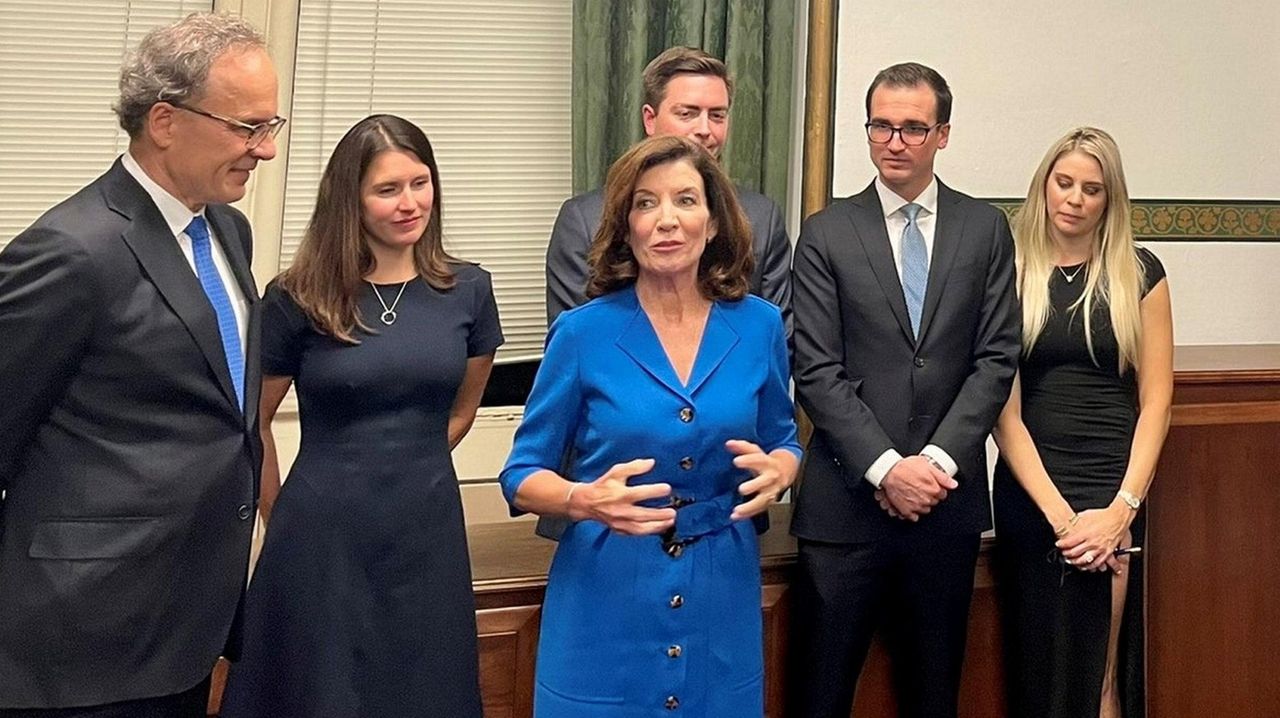 Newly sworn-in Gov. Kathy Hochul addressed New Yorkers for the first time as the top elected official in the state Tuesday, laying out her agenda for her administration.

ALBANY — In her first hours in office, Gov. Kathy Hochul outlined her top priorities and sought to reintroduce herself to New Yorkers as someone who knows their needs well even if they don’t know her.

Hochul, a Buffalo Democrat and the state's first female governor, sought to swiftly distinguish herself from her former boss, Andrew M. Cuomo, who resigned Monday following a sexual harassment investigation and a fast-moving process to impeach him.

In an afternoon address, she outlined plans for three immediate priorities: Contain COVID-19 with new mask, vaccine and testing requirements for schools, jump-start rental and unemployment aid programs that stalled under Cuomo, and change the culture of state government and the bullying tone set by her former running mate.

She also took time to reintroduced herself to state residents.

Even though she’s spent seven years as the state’s second-highest-ranking official, she implicitly acknowledged the low name recognition that comes with being lieutenant governor.

But she said her extensive travel around the state, working on everything from drug task forces to economic roundtables to Main Street ribbon-cuttings, gave her the experience to know the needs of communities great and small in the state.

She also gave a personal touch, relating what her family has lost in the opioid crisis, discussing her mother growing up in an abusive household and detailing her father’s career from steel plant worker to computer entrepreneur.

"To those New Yorkers who’ve yet to meet me, I say this: You may not know me. But I know you," Hochul said from the "Red Room," the tall-ceilinged venue on the second floor of the State Capitol where governors traditionally hold news conferences.

"In my travels to all 62 counties every year, I’ve walked your streets, met you at diners, supported your small businesses, listened to farmers, engaged local officials and worked to revitalize long-neglected downtowns," the governor said. "And I’ve listened with a broken heart to your stories of loss from opioid abuse, sadly similar to what happened to my nephew. … And I’ve been in the trenches with local health officials and leaders, battling the pandemic, day after day after day.

"As a result of all this, I’ve internalized the hopes and the dreams of 20 million people who share the name New Yorkers and I want you to know, you are heard," Hochul said. "Your priorities are my priorities."

She delivered her remarks in a crisp 11 minutes, another departure from Cuomo’s lengthy addresses.

Hochul said her top and most immediate task is keeping the pandemic as contained as possible.

She said she will mandate masks for students and staff at schools, along with ordering staff to either be vaccinated or undergo weekly testing.

Her second priority is to bolster staff to get rent and unemployment assistance, which has been languishing, out the door. Congress and President Joe Biden sent New York $2.4 billion for rental assistance for those who lost jobs during the pandemic, but only 4% of it had reached tenants and landlords as of Aug. 10.

"I am not at all satisfied with pace that this COVID relief is getting out the door," Hochul said. "I want the money out — and I want it out now. No more excuses and delays."

Anyone who has qualified for rent assistance would be protected from eviction for a year, she said.

Later Tuesday, Hochul announced that about 100 workers have been reassigned to expedite aid applications and the state will spend $1 million in marketing and outreach to make sure eligible tenants apply.

On the broad issue of state government culture, Hochul said she would boost transparency, for example, by expediting government responses to information requests made by the public and media.

She said she’d strengthen anti-sexual harassment training by ordering classes to be attended in person and not just online and broaden ethics protections.

Drawing to a close, Hochul marked the historical significance of her ascension and said she had the confidence and ability to lead the state and "make New York's women proud."

"You will find me to be direct, straight-talking and decisive," Hochul said. "I will not be deterred, and I'm willing to be bloodied and marred in the pursuit of doing what's right for the people of this great state."

Kathy Hochul takes ceremonial oath of office as NY's first female governor"I want people to believe in government again," Hochul said. "It's important to me that people have faith ... I take that very seriously." Photos: Gov. Kathy Hochul through the yearsHochul, who has also been a town board member, a county clerk and a one-term congresswoman in Western New York, was sworn in as governor on Aug. 24. She is the state's first female governor. Hochul: Masks mandatory for students, staff at all schoolsThe new governor also ordered mandatory COVID-19 vaccines for teachers and other staff members, or an option of weekly testing. State-run mass vaccination sites may return, Hochul saysNewly installed Gov. Kathy Hochul said Tuesday she may reopen state-run mass vaccination sites, in part to meet demand for a booster shot against COVID-19.