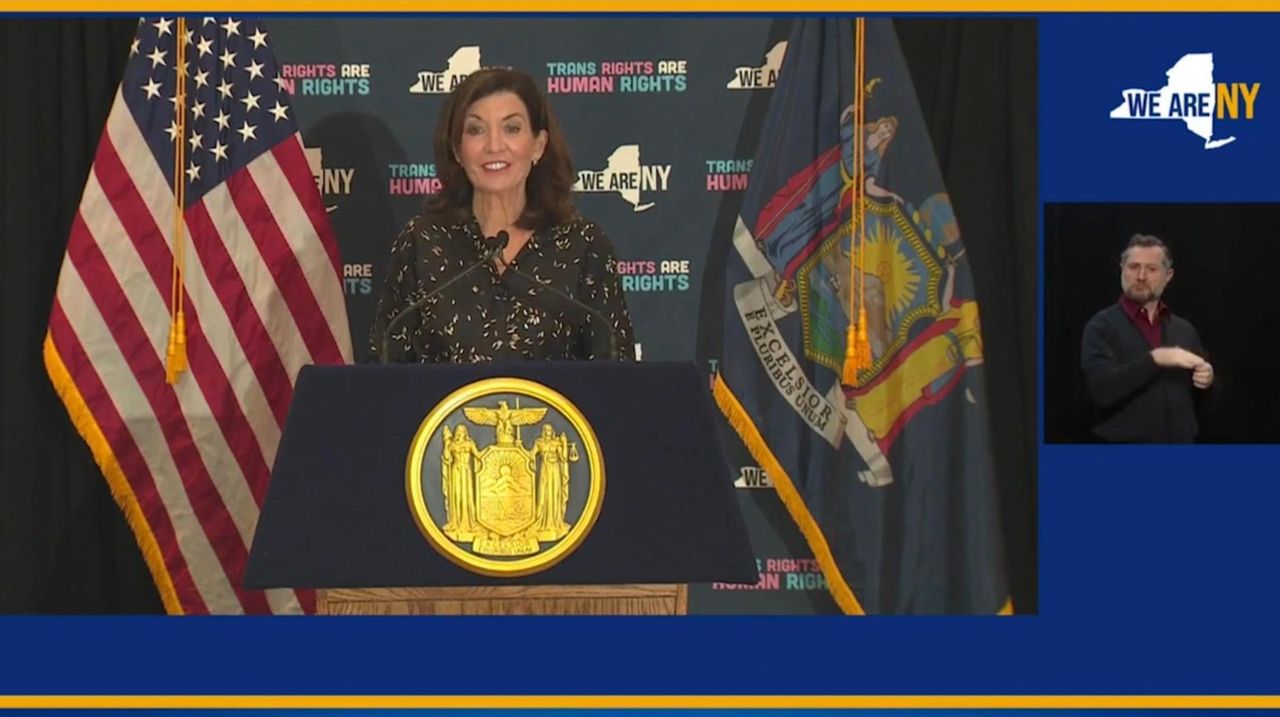 On Tuesday, Gov. Kathy Hochul signed two bills designed to expand protections for transgender New Yorkers and those convicted of crimes committed while they were victims of sex trafficking or forced prostitution. Credit: NY Governor's Office

Gov. Kathy Hochul signed a pair of bills Tuesday that expand protections for members of the LGBTQ community and sex trafficking victims.

One law aims at ending what has become known as "deadnaming," which refers to the use of a transgender person's birth name without their consent. The legislation requires utilities, municipalities and phone service providers to allow the state's 78,000 transgender residents to use their preferred name or pronouns on bills without changing their name through the courts.

Hochul said the new law will also mitigate the risk of an individual being found by an abusive family member or partner.

"For a transgender individual, being misgendered is truly traumatic," Hochul said during an event in Manhattan. "It's stressful to be deadnamed. These are people with feelings. Individuals that deserve more than that."

"Being called a name you don't identify with is invalidating, disrespectful and could put transgender individuals needlessly in harms way by potentially outing them to others," he said.

David Kilmnick, president and chief executive of the LGBT Network, a Hauppauge nonprofit, said it is "particularly poignant" that Hochul signed the bill during Transgender Awareness Week.

"Although there is much more work to be done, this legislation is common sense and continues to show that New York leads the way for taking real action to lift up LGBT people and their families," Kilmnick said.

The second bill, known as the START Act, provides judges more latitude in vacating criminal convictions for people who committed the offenses while they were victims of sex trafficking or compelled prostitution. The legislation is designed to remove legal barriers to employment, housing and education, officials said.

"The START Act will give victims of trafficking the fresh start they need in their lives," Ramos said.

Hochul meets with White House officials on infrastructure
Suozzi: Hochul could 'do a better job' on COVID-19
DMV: 400,000 face delays in getting auto registration stickers
CNN suspends Chris Cuomo for helping brother in scandal
Gov. Hochul frequently invokes her faith in public addresses
Top photos from around LI from November 2021
Didn’t find what you were looking for?