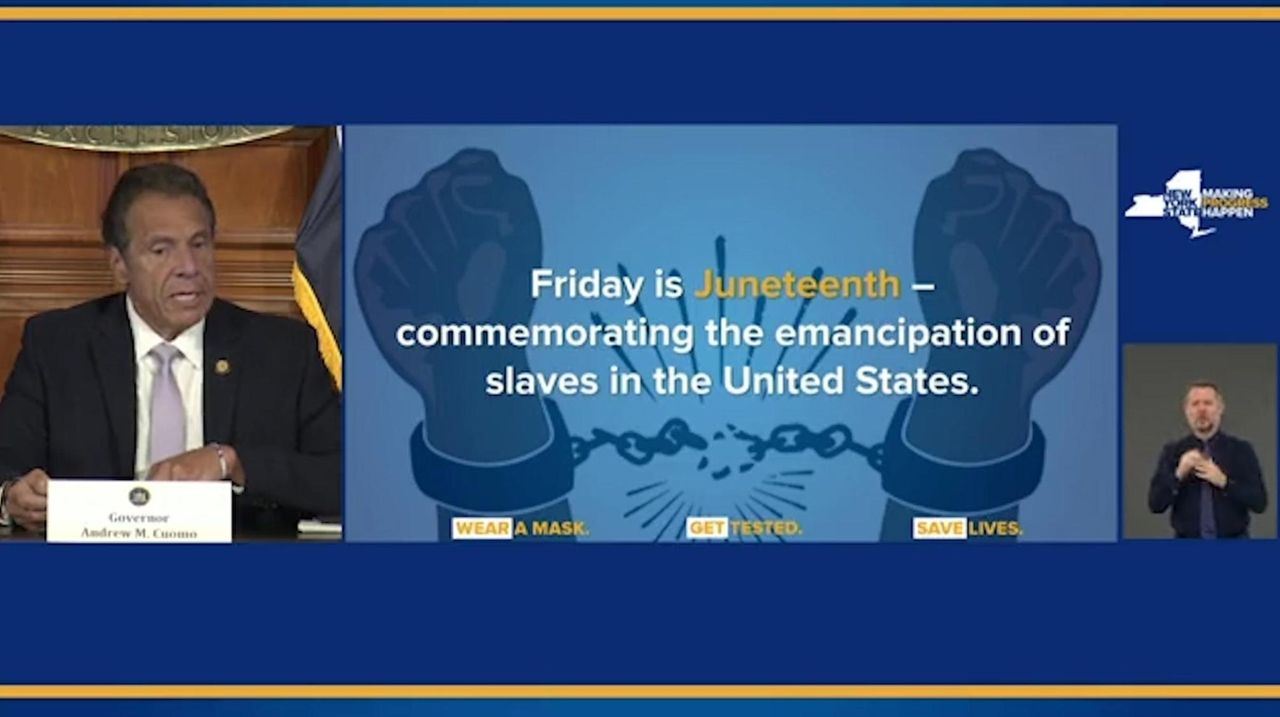 Gov. Andrew M. Cuomo on Wednesday said he will be signing an executive order to make Juneteenth a holiday for state employees and will introduce legislation to make it an official state holiday in 2021. Credit: Facebook / Governor Andrew Cuomo

ALBANY — Gov. Andrew M. Cuomo on Wednesday ordered that Juneteenth be a paid holiday for state workers every June 19 to honor the release of African Americans from slavery in 1865.

“It is a day we should all reflect upon,” Cuomo said announcing his executive order. “It commemorates the emancipation of slavery in the United States.”

He also said he will propose making Juneteenth a state holiday next year. “It is a day that is especially relevant in this moment in history,” Cuomo said.

The order follows Cuomo’s support of nationwide protests over the death of George Floyd, an African American who was pinned down by the knee of a Minneapolis police officer.

On June 10, a bill was introduced in the Assembly to make Juneteenth a public holiday to “acknowledge and reflect on a day that changed the trajectory of the lives of most Blacks and African Americans being held as slaves in the U.S.

“On June 19, 1865, Union General Gordon Granger and federal troops arrived in Galveston, Texas, to take control of the state and enforce the Emancipation Proclamation marking the effective end of slavery in the United States,” the bill states.

The Emancipation Proclamation had been signed more than two years earlier by President Abraham Lincoln during the Civil War.

Texas made Juneteenth a state holiday in 1980, and Virginia is considering the legislation this year.

“Society progresses, we change, we evolve,” Cuomo said. “I think that this is a period where we could see, we could see monumental change … Whether it’s reform on the police department. Whether it’s an expanded racial understanding and sensitivity and progress. And if Juneteenth is part of that — and recognition of what happened and an understanding of what happened and an acknowledgment of that — great!”

But Sen. Charles Barron (D-Brooklyn) said the holiday measure falls short of what the state needs to do for descendants of slavery, including the need to better fund schools and establish an independent investigator to probe claims of police brutality.

“He should be calling for a reparations bill,” said Barron, who has a bill that would create a panel to investigate the issue of paying for reparations to the communities of descendants of African American slaves.

2:39
Governor Cuomo asks private businesses to go to vaccine-only admission
2:22
Cuomo says local governments will decide mask policies
These restaurants, employers, colleges and NYC theaters will be requiring COVID-19 vaccines
Fauci: 'Things are going to get worse' with COVID-19
Sales tax revenue increasing, but analysts are wary
Some LIPA employees file claims of harassment, bullying
Didn’t find what you were looking for?