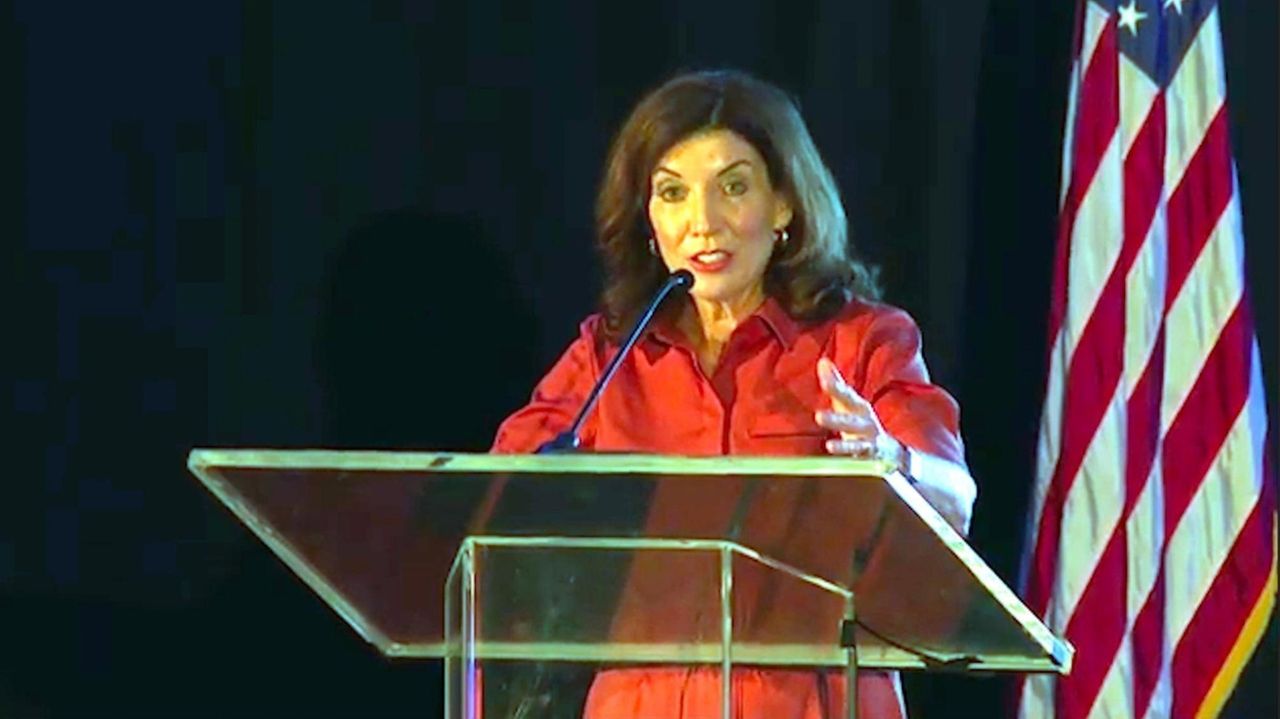 Gov. Kathy Hochul on Friday said she is open to changing the annual awarding of hundreds of millions of dollars worth of tax breaks and aid to attract and retain businesses. Credit: NY Governor's Office

ALBANY – Gov. Kathy Hochul on Friday told a business group she is open to changing the annual awarding of hundreds of millions of dollars worth of tax breaks and aid to attract and retain business, which was a major perennial event for former Gov. Andrew M. Cuomo.

Hochul wouldn’t say if she would reduce or increase the awards distributed in late fall through the Regional Economic Development Councils. Under Cuomo’s process, business leaders worked with local government and higher education officials in 10 regions around the state to devise proposals to secure state economic development funds.

At the events, the Cuomo administration and appointed business leaders chose what they considered the best proposals to create jobs, although all areas of the state received millions of dollars in tax breaks and aid. This year, Cuomo had planned to disburse $750 million in tax breaks and aid for job-producing projects.

Cuomo’s process pooled many of the state’s economic development aids that formerly had been doled out by state agencies. The process has long been criticized by the progressive Democrats in the State Legislature as a poor use of limited state resources for wealthy companies.

"I like the model we have right now, but I don’t feel constrained that that’s the model we have to stick with," Hochul told the Business Council of New York State, a major lobbying force and constituency in Albany. "I want to hear from the business community … I’m looking for ideas."

After her speech, she declined to say if changes could include more or less funding to attract and keep employers.

"I will do whatever it takes to bring business here and create jobs," Hochul said.

In response to Hochul's remarks, Senate Deputy Majority Leader Michael Gianaris (D-Queens) said, "To date, the state’s economic development strategy has been ineffective and a breeding ground for corruption. Playing favorites by subsidizing individual corporations has proven to be a waste of public dollars. … A new approach will be a good thing if we focus our resources on making the state more attractive for businesses and their employees by first improving housing, education and infrastructure."

Business Council president and CEO Heather C. Briccetti said this is a critical time for the aid to employers.

"I think we are going to see continued support for economic development," she said. She noted New York state trails most states in recovering jobs after the height of the COVID-19 pandemic. "This is not the time to take the foot off the gas."

On Long Island, the Regional Economic Development Council system secured $727 million for 885 projects in nine funding contests between 2011 and 2019, the second biggest funding total after the Syracuse area. There was no competition in 2020 during the pandemic.

"We should always be looking at how to invest in our communities more effectively," said Matt Cohen, president and CEO of the Long Island Association. "Now, more than ever, the REDCs should be providing additional support for small businesses as we navigate our economic recovery from the pandemic."