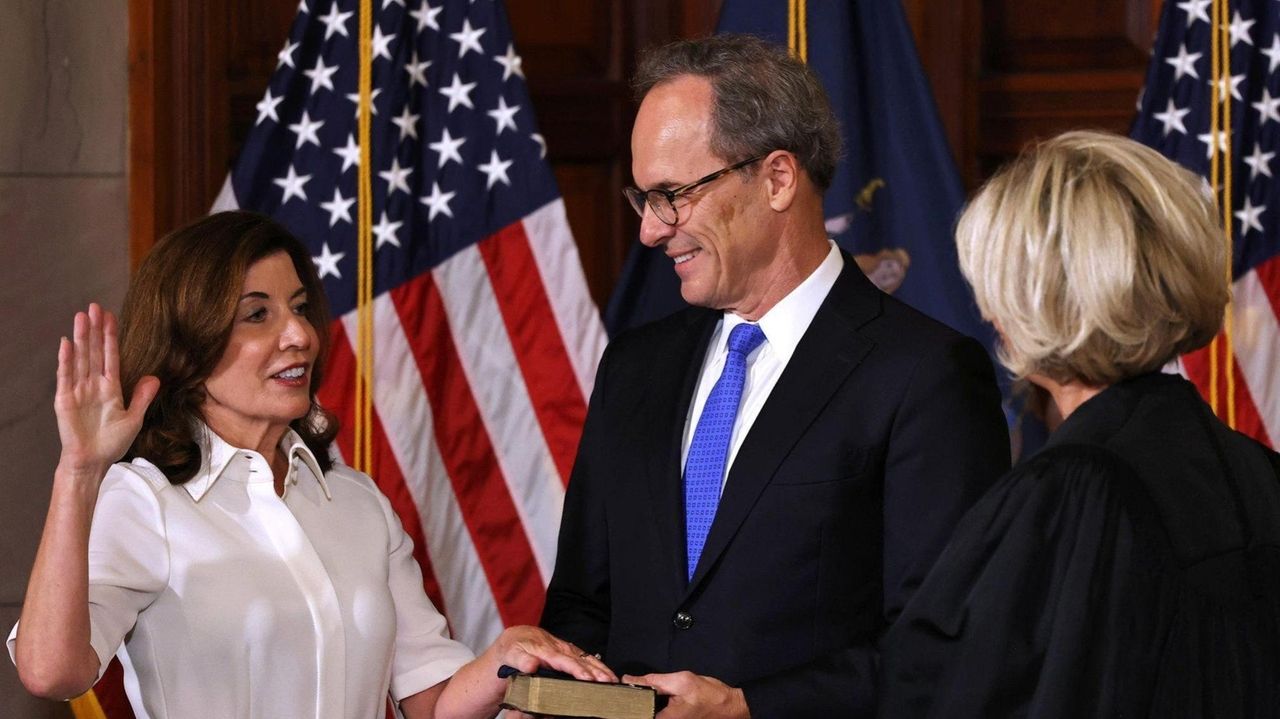 ALBANY — Gov. Kathy Hochul took a ceremonial oath of office Tuesday in an event packed with supporters from around the state to help usher in an era for New York after a decade of governance by former Gov. Andrew M. Cuomo.

Tuesday’s midmorning swearing-in came hours after the state’s first female governor was sworn into office shortly after midnight in a private ceremony.

"I want people to believe in government again," Hochul said. "It’s important to me that people have faith … I take that very seriously."

She said she plans to outline her plan to combat COVID-19 and its variants and to get aid to renters who lost income because of the pandemic. She also will announce more members of administration in an address later Tuesday.

She was flanked by her husband, William Hochul, an executive at the Delaware North concessions and gambling corporation and a former U.S. attorney in Buffalo from 2010 to 2016. He is officially New York’s "first gentleman." They were joined by their two children, the governor’s father and her siblings.

Sitting in the front row were the legislative leaders — Senate Majority Leader Andrea Stewart-Cousins (D-Yonkers) and Assembly Speaker Carl Heastie (D-Bronx). Afterward, Hochul conferred with them behind closed doors. She said that illustrates what will be a hallmark of her administration.

"It’s going to be a different culture in general," Stewart-Cousins said. "It absolutely feels good … it’s a collaborative tone and it’s a sense of whatever has to be done, we will do."

Stewart-Cousins and Heastie said their chambers are interested in making changes to the Joint Commission on Public Ethics, the board that enforces ethics and lobbying laws. It was created by Cuomo in 2011 and has been criticized as being ineffective. JCOPE continues to be led by Cuomo appointees.

"We have always been open to changes … to give people confidence that their government doing things in their interest," Heastie said,

"There is a lot of legislation about making changes to JCOPE," Stewart-Cousins said.

Hochul also said she will meet with New York City Mayor Bill DeBlasio. The legislative leaders and DeBlasio had clashed with Cuomo’s hard-charging style in the past.

"This is what collaboration looks like," Hochul said. "There will be no blindsiding."

"Her challenge and opportunity will be to become the face of New York's government," said Jonathan Krasno, a political-science professor at Binghamton University.

"While she will have political competitors undercutting her, my guess is that most New Yorkers will be pretty receptive to a change in tone and face coming from Albany," Krasno said. Still, he said, "She needs to be seen as formidable by others in Albany to get stuff done."

Psaki said Biden and Hochul "talked about their shared time at Syracuse University, and Governor Hochul told the president she wanted to visit Washington to meet with him, to discuss infrastructure" and working together.

For decades, decisions on budgets and major policy in Albany were negotiated behind closed doors by "three men in a room." Stewart-Cousins first broke that ceiling in 2019 and Hochul becoming governor ended any remnants of that barrier.

"It was hopeful and inspiring to be in 'the room where it happens,'" Stewart-Cousins said Tuesday about when she became majority leader.

Heastie said he welcomes Hochul's rise in part for the inspiration it provides to his daughter, Taylor.

"This is probably the happiest time for me to be a minority," said Heastie, who is Black. "Any time a glass ceiling is broken, it’s good for the country … I think it’s a strong message to send. I don’t mind being the only guy."

Photos: Gov. Kathy Hochul through the yearsHochul, who has also been a town board member, a county clerk and a one-term congresswoman in Western New York, was sworn in as governor on Aug. 24. She is the state's first female governor. Hochul, on LI, says 'be ready' for mask mandates in schoolsThe lieutenant governor, to be sworn in as governor next week, also met with labor officials regarding future projects on Long Island.