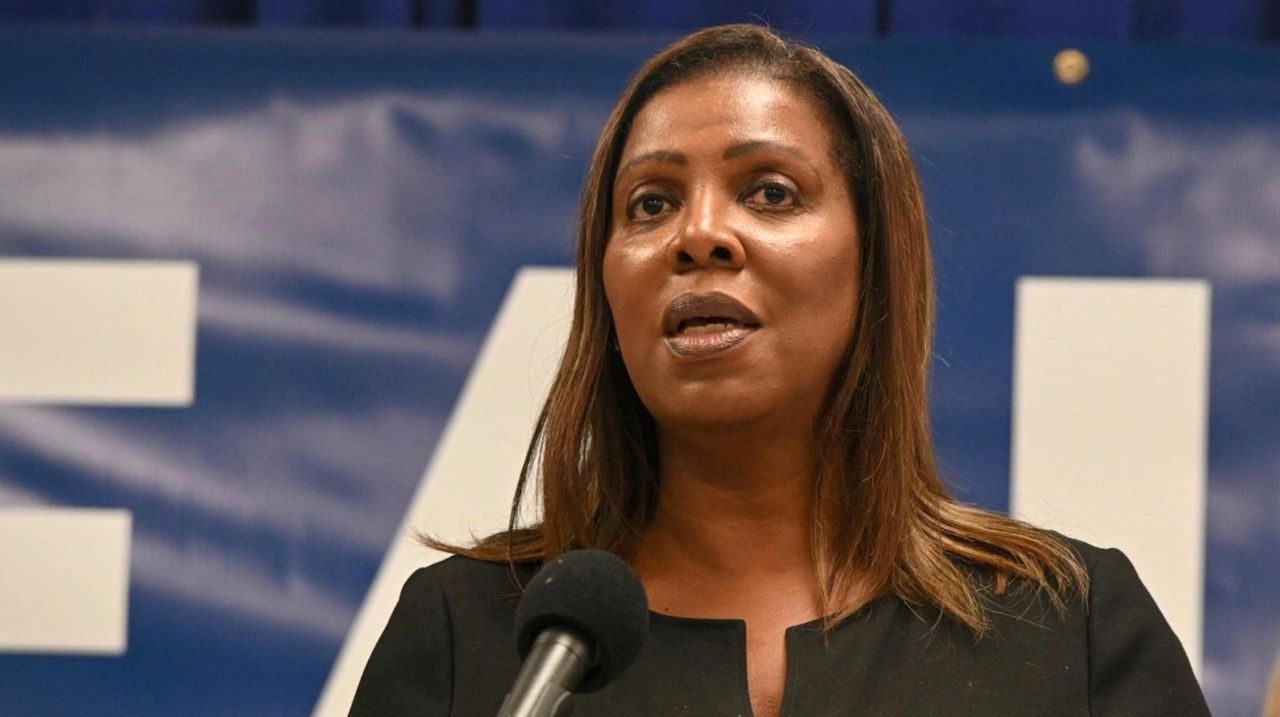 Just six weeks after jumping in the race, James reversed course and said she wants to continue in her current office.

"I have come to the conclusion that I must continue my work as attorney general," James said. "There are a number of important investigations and cases that are underway and I intend to finish the job. I am running for reelection to complete the work New Yorkers elected me to do."

Just six weeks after entering the race, James reversed course and said she wanted to remain in her current job.

The news came as party insiders said James was struggling to raise campaign money compared with Hochul, and Democratic officials were trying to get party members to rally behind the governor.

It also came two days after a new statewide poll showing Hochul with an 18-point lead over James, her nearest challenger.

"I think this was a selfless thing for [James] to do, for the benefit of party unity," Jay Jacobs, state and Nassau County Democratic chairman, told Newsday.

Based in Brooklyn, and friendly with big unions and progressive groups, James was seen as Hochul's strongest challenger in the primary.

James also was pursuing a historic quest to become the first Black woman elected governor in the nation.

"She jumped in but it did not change the race" in terms of shaking it up, Marist College pollster Lee Miringoff said.

"There wasn't a lot of visibility and the poll numbers are what they are," Miringoff said of James' campaign.

At a news conference about two hours after James' announcement, Hochul said the attorney general had phoned her in the morning to tell her of the decision.

Hochul said it was a "cordial" and "respectful" conversation with discussions about continuing to work together with James as attorney general.

Hochul endorsed James' reelection and added, "I look forward to having her on the ticket."

"I'm a Buffalo Bills fan, I'm used to being an underdog," she continued. "And in my mind, I'm down and I work hard and that's the hallmark of my successes — no matter what a poll shows, no matter what the landscape looks like. … Unless everyone drops out, we will have a primary and I'm expecting that."

Still, looking ahead, Hochul said, "I think Republicans will look at this, as well, as not a good development for them as we march unified" in 2022.

"This is over," Sheinkopf told Newsday. "Hochul is likely to be the [gubernatorial] nominee. Tom Suozzi is likely to run for reelection" to the House.

Sheinkopf said Hochul has a shot at locking up crucial blocs of New York City Democrats now that James is out.

Williams can appeal to the party's left but will have a harder time getting broader support, Sheinkopf said.

He said Suozzi, like Hochul, is viewed as part of the Democratic Party's more moderate wing and would be competing for many of the same supporters as Hochul.

As if on cue, one of James' key Brooklyn supporters immediately endorsed Hochul.

"Kathy has accomplished more in four months than many of her predecessors in an entire term," Bichotte said. "I am confident that Hochul will be the best choice to lead our state forward … and she will have the support of Brooklyn behind her as she continues to blaze a path as our first female governor."

Suozzi went on Twitter to offer his "best wishes" to James, who he said "has tremendous responsibilities as the sitting AG & I understand her desire to devote her energies to seeing through & continuing the important matters before her."

Addressing the reframed Democratic primary, Suozzi said: "As to the governor's race, this narrowed field underscores that the voters are seeking experienced managers with common sense solutions to everyday problems like crime and taxes."

Rep. Lee Zeldin (R-Shirley), a GOP candidate for governor, said James' decision made it more likely Williams would be the Democratic nominee.

With James out of the race, "the field in New York City — the highest concentration of New York’s Democratic Party Primary voters — is clearer than ever for Jumaane," Zeldin said in a campaign statement.

James' decision to run for reelection had another ripple effect, as would-be Democratic attorney general candidates including state Sens. Michael Gianaris (D-Astoria) and Shelley Mayer (D-Yonkers), and former Hempstead Town Supervisor Laura Gillen, all said they were withdrawing from consideration.

AG James issues subpoena to question Trump under oathAttorney General Letitia James' subpoena of former President Donald Trump came to light on the same morning that James suspended her campaign for governor. Dem governor hopefuls rush to raise money before key filing dateA strong financial showing could influence support at the state convention. The candidates also are focusing on suburban voters. James defends harassment investigation of Cuomo"He said 'Tish investigate these allegations of sexual harassment.' He said, 'I believe in you. You've done a good job," James recalled of how then-Gov. Cuomo assigned her the probe.  "Unfortunate that he didn't agree with the outcome."   Letitia James officially announces she will run for governor"I have spent my career guided by a simple principle: Stand up to the powerful, on behalf of the vulnerable to be a force for change," James said.