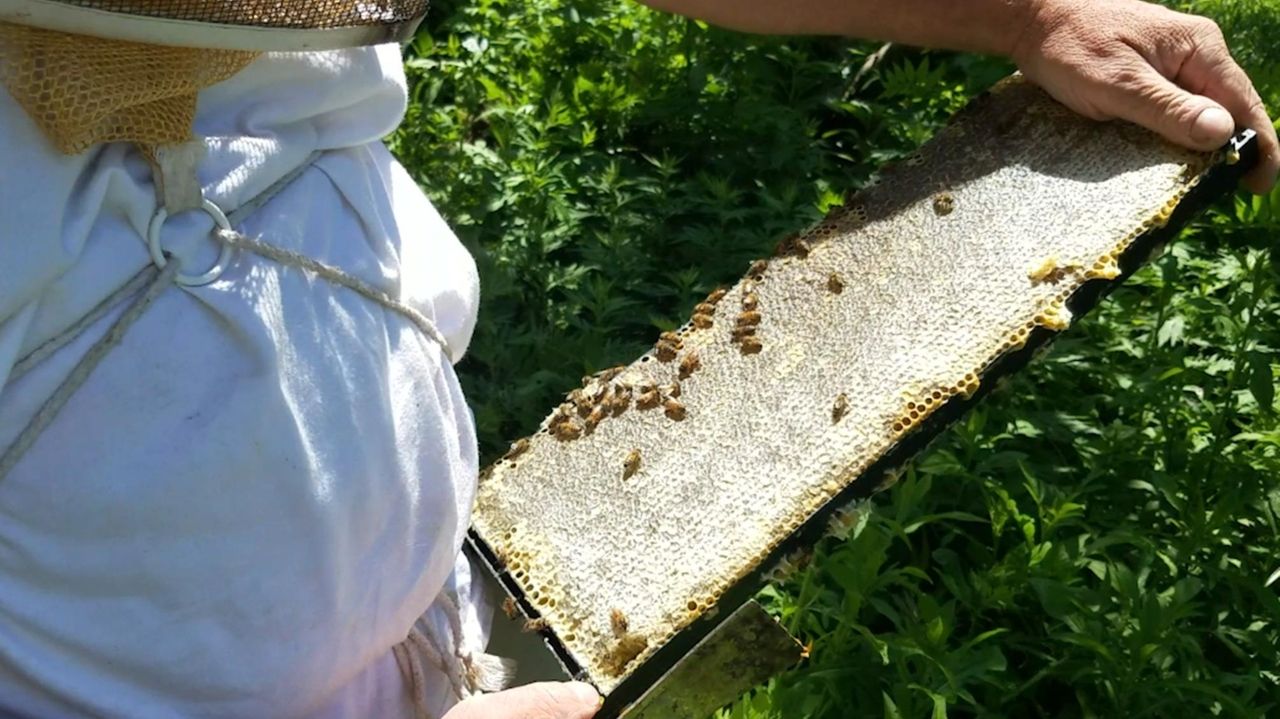 The tiny Varroa mite is causing big problems for New York's honeybee population, threatening crops that are a major part of the state's $5 billion agriculture industry. Local beekeepers and farmers weigh in on the importance of bee colonies and this threat. Credit: Newsday / Christopher Cameron

A plague of parasitic mites is exterminating New York bee colonies, threatening $500 million in losses from the state’s annual agricultural production that relies on bee pollination and honey production.

Commercially operated bee colonies in upstate New York have sustained up to 70 percent population loss over the past several years due to pesticides, loss of habitat and disease, according to state officials.

But the varroa mite has recently emerged as one of the leading causes of colony death in New York, and has infested 90 percent of the colonies surveyed in the past year, said Emma Mullen, a research scientist at Cornell University. Mullen is the senior lead of the New York State Beekeeper Tech Team, a group of scientists working with state officials to protect honeybees and other species of animals that pollinate crops.

“A lot of the operations that we visited — 78 percent of them — had levels that are critical for honeybee health,” Mullen said. “It poses a risk to the colony dying.” 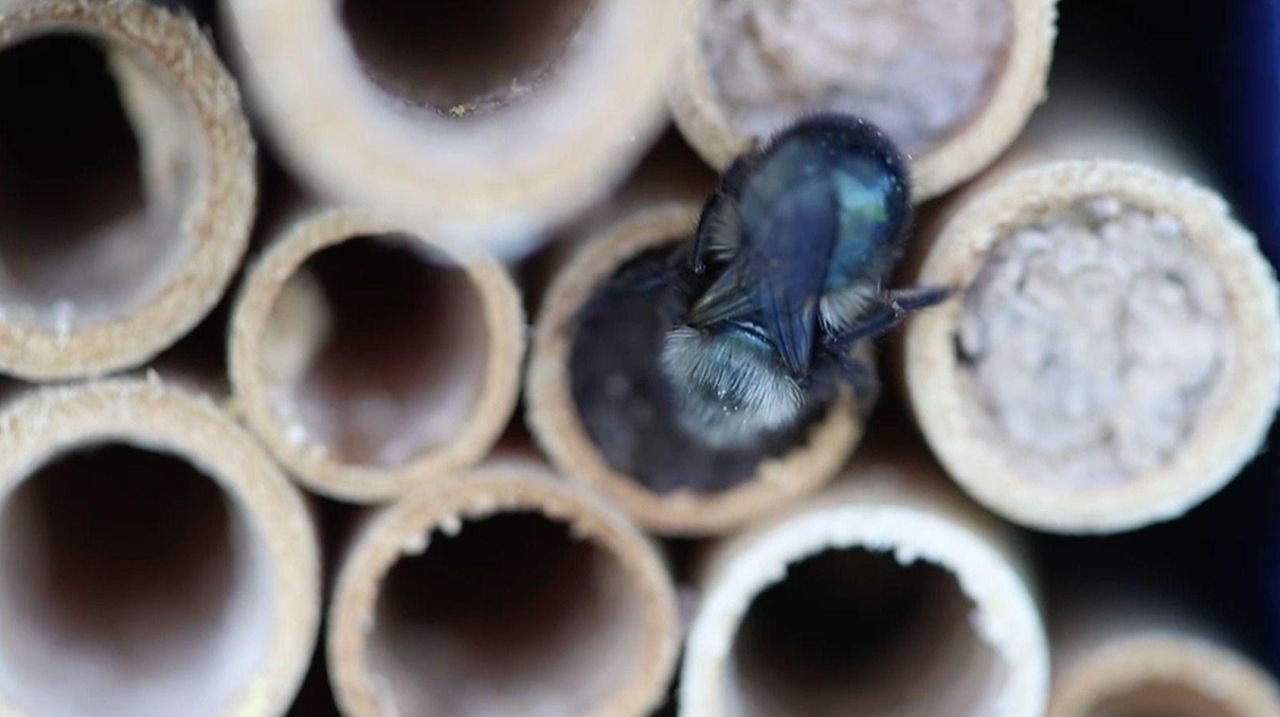 Long Island's bee ranchers Southold beekeeper Laura Klahre raises and uses mason bees -- one of 450 wild bee species in New York State and one of more than 4,000 nationally. Not as well known as honeybees and bumblebees, the little blue bees that are native to America live solitary lives in single tubes that they seal with mud, like cement masons. Hence their name. Credit: Randee Daddona

Varroa mites weaken honeybee colonies by feeding off the bees in a manner similar to a mosquito. Deadly viruses are transmitted to the colony in the process, which can cascade into an extermination of the colony, according to Mullen’s report.

Her team was formed just over a year ago with $150,000 in state funding and is led by the Department of Agriculture and Markets. The Department of Environmental Conservation also collaborates in the state initiative to protect pollinator species.

“The conundrum here is that everyone here realizes that it’s significant, we all need pollination,” said Richard Ball, commissioner of the Department of Agriculture and Markets. “But when we gathered to do the Pollinator Protection Plan, we began to realize there were huge gaps in the actual understanding, other than it’s a big deal.”

Ball said state officials were surprised to find out just how much of a threat the varroa mite was when Mullen’s team published its findings. Only 36 percent of beekeepers were independently monitoring their colonies for the parasite in 2016, according to Mullen’s report.

Beekeepers on Long Island are hobbyists. Some have established relationships with local farms, providing farmers with pollination for their crops while allowing the bees to collect forage to produce honey. Donal Peterson is among those who closely monitor their hives for varroa. He is vice president of the Long Island Beekeepers Club and manages 100 bee colonies across Long Island, with about 4 million bees between them all.

“Every one of them have varroa to some level, but it’s manageable,” Peterson, of Bay Shore, said recently as he collected honey from a hive at Restoration Farm in Old Bethpage. “Other beekeepers tell me that they don’t have varroa mites in their colonies. I just don’t think that they know how to look for them.”

It’s difficult to prevent varroa mites from infesting a colony in the first place, Peterson said, because it requires that other nearby colonies stay healthy. When one colony gets sick and dies, other nearby colonies will attack to steal their honey, which causes the mites to spread even further.

“I’ve tried it myself as a hobbyist, thinking that I could be a very hands-off beekeeper,” said Caroline Fanning, co-founder of the Restoration Farm that hosts one of Peterson’s bee hives. “It didn’t work out that way. I had high incidences of varroa. That’s why we have Don coming in to take care of the hives.”

Because the infestation is so common, beekeepers have to focus on keeping the varroa manageable, rather than preventing infestations, Peterson said. A level of varroa mites greater than 3 for every 100 bees is unsustainable to the colony, according to Mullen’s report.

“By themselves, they may not be such a problem, but when you start adding in all these other viruses . . . lack of forage . . . pesticides,” Peterson said. “People like to look for the magic bullet that’s going to solve all these issues with bees. I think what we’re seeing is a scenario of ‘death by a thousand cuts.’ ”

Ball said that with all those variable threats to bee colonies, it’s difficult to focus the department’s resources in combating pollinator population decline. DEC officials added that there is not enough information available to know which direction to take in drafting policy.

“I think we need a little more research,” Ball said. “[Varroa] is a very significant player, more than we previously understood . . . so let’s dial that in a little closer and see if there are additional management practices that we can put in place.”

1:37
Dogs help sniff out potential trouble at JFK
How much state aid could your school district get?
Where to look for a COVID-19 test on LI
Highlights of Gov. Kathy Hochul's 2022-23 budget
2:11
Brentwood twins hope to make Regeneron finalist list
2:37
Roy: 'New York has lots of money to spread around this year'
Didn’t find what you were looking for?