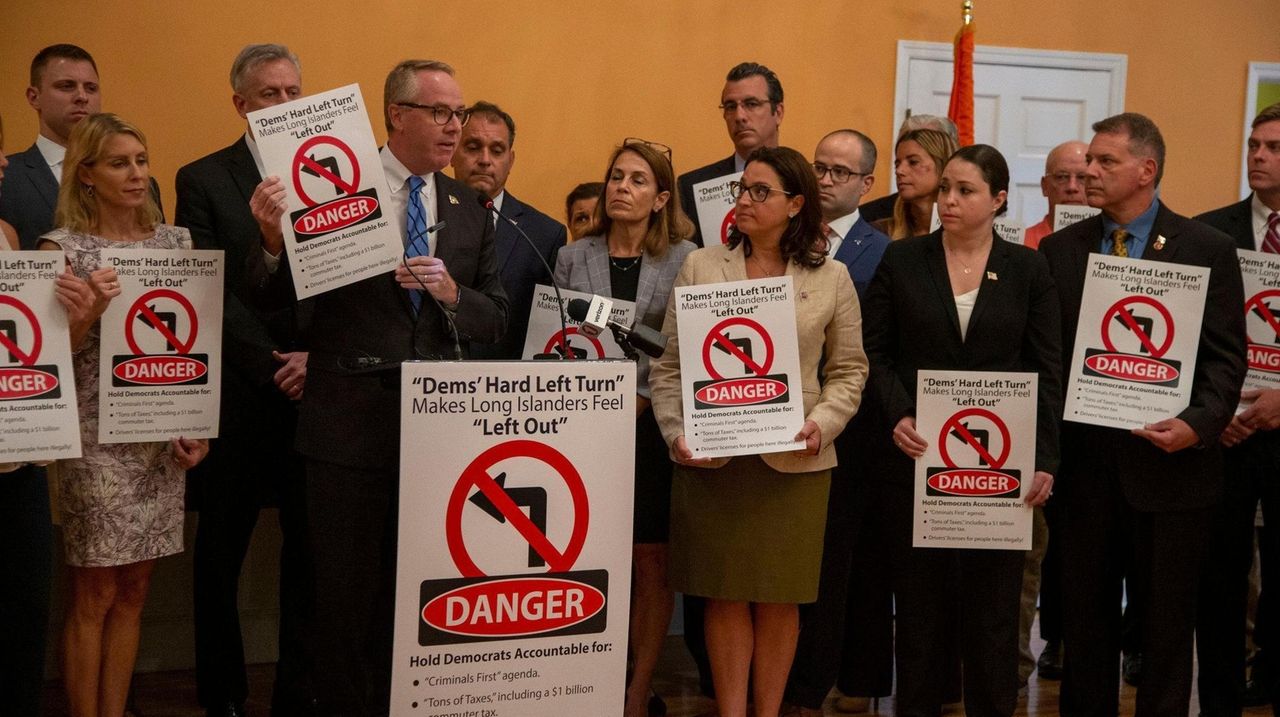 Nassau Republican officials and candidates gathered in Westbury on Tuesday to denounce legislation that was passed by the Democrats during the 2019 legislative session.  Credit: Newsday / Morgan Campbell

Nassau County Republicans offered the first hints of a strategy to take back control of the State Senate from Democrats in 2020, casting the past legislative session as a "hard left turn" that betrayed suburban voters and catered to criminals.

A coalition of local Republican lawmakers gathered at party headquarters in Westbury to criticize the Democrat-led state Assembly and Senate for new laws passed before the legislative session ended last week.

Long Island's six Democratic state senators voted against the driver's license bill. They supported the bail and discovery legislation in an omnibus budget bill and split on rent control, with only Sen. Todd Kaminsky (D-Long Beach) and Sen. Kevin Thomas (D-Levittown) supporting it.

"Cashless bail and the new rules of disclosure by prosecutors will lead to more crimes, more drug dealers in our streets, more victims in vulnerable communities," Nicolello said.

Democrats accused Republicans of "fearmongering" and making a "desperate" attempt at relevancy. Four Democrats on Long Island unseated Republican Senate incumbents in last November's election. The victories helped Democrats gain control of the State Senate for the first time since 2010.

Mike Murphy, spokesman for Senate Democrats, criticized Senate Republicans for voting against the budget deal, which included a permanent tax cap, earlier this year. He also called on them to oppose federal tax legislation, passed in 2017, that limited the deduction for state and local taxes to $10,000.

"This is an embarrassing stunt by Long Island's corrupt Republican Party to distract from the fact that they opposed our successful fight to make the property tax cap permanent, provide our schools with record funding and protect our communities from gun violence," Murphy said in a statement.

"It is sad that they spend more time performing political theater than opposing Washington's tax plan that will continue to raise the cost of living on Long Island," Murphy said.

New state legislation provides college financial aid to immigrants whose parents arrived in the United States illegally. The legislation will cost $27 million in the state's $175.2 billion state budget and is expected to provide financial aid for 6,000 to 8,000 students annually.

“Remember parents, there's a finite number of seats in our state colleges. So for everyone who’s here illegally that’s brought in, that takes a seat away from your kids — when you’ve paid for years and years to build and maintain those colleges. It’s a slap in the face to every hardworking American, and a slap to immigrants who come here legally and follow the rules.”

But State Sen. Anna Kaplan (D-Great Neck) accused county Republicans of resorting, "to a playbook of fearmongering and dog-whistle politics in a desperate grasp at relevance."

Long Islanders "deserve officials who deliver on a pro-suburban agenda, as this Senate majority has, not cowards who fail to put forth any positive solutions for our region,” Kaplan said.

Earlier this month, as the state legislative session wound down, Nassau and state party chairman Jay Jacobs warned that Democrats could be "thrown out of office" if the State Senate permitted votes on contentious issues, including rent control and driver’s licenses for immigrants living in the country illegally.