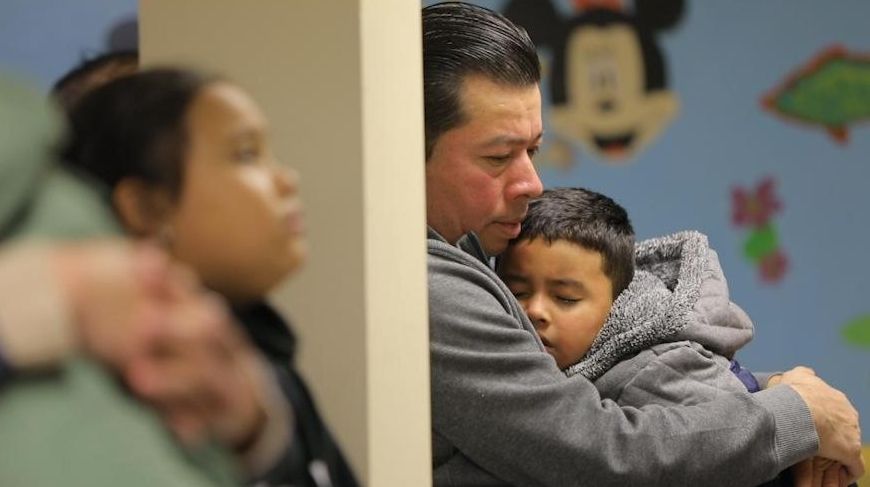 New York State will provide guidance to Salvadorans and other immigrants worried about losing the Temporary Protected Status that allows them to live and work legally in the United States, officials announced Tuesday.

An estimated 16,200 Salvadoran immigrants in New York State, out of about 262,500 nationwide, were told Monday that President Donald Trump’s administration would let their protected status expire in September 2019.

Others affected by moves to curtail the program, known as TPS, are Haitians and Nicaraguans who will see their work permits expire this July and in January 2019, respectively. All three groups were granted the status when their countries were in turmoil due to natural disasters, with Salvadorans given a chance to stay after 2001 earthquakes in their homeland.

“After fleeing a horrific natural disaster, Salvadorans found safe haven on our shores and have called the U.S. home for more than a decade. They have worked hard, paid taxes, bought homes, and had families — all in an effort to achieve the American Dream,” Cuomo said in a statement.

Taking away their TPS, Cuomo added, will “tear families apart, disrupt small businesses, and lead those who have become part of the American fabric to an uncertain future.”

Federal officials emphasized that the program was meant to bring temporary relief to nations in distress. “The substantial disruption of living conditions caused by the earthquake no longer exist,” the U.S. Department of Homeland Security said.

Callers to the New York immigration hotline, at 800-566-7636, will receive in multiple languages up-to-date information, consultations, guidance and screening for adjustment of status, if they qualify, though the state government has no say on national immigration policy.

New York Secretary of State Rossana Rosado said the hotline was “meant to be kind of a safe place” for Salvadorans and other affected immigrants. The state seeks “to alleviate the panic” that follows such announcements, she said.

“The governor has repeatedly said that we are all immigrants, that we have the Statue of Liberty in the harbor, that this is the wrong way to view immigrants and that he will do everything in his power as governor to protect immigrants in New York State,” Rosado said. “This is one step in that direction.”

The state’s Office for New Americans, which gave the hotline contract to the nonprofit Catholic Charities, received $6.4 million for 2017, and $11.4 million was earmarked for the state’s Liberty Defense Project, primarily to assist immigrants in deportation proceedings. A spokeswoman for Cuomo said figures weren’t yet available for the coming fiscal year’s budget, but that the governor would continue his commitment to those initiatives.

“Although immigrants might be under attack from forces at the federal level, forces at the state and local levels are willing to stick their hand in the fire on behalf of immigrants,” said Elise Damas, a lawyer with the nonprofit Central American Refugee Center in Hempstead.

Walter Barrientos, organizer with Latino advocacy group Make the Road New York in Brentwood, hopes the hotline services are the start of a response to federal immigration policy.

“It’s a welcome step,” Barrientos said. “I also think that we need the governor to do more. We need him to enact legislation that would allow these thousands of families on TPS” and other immigrants at risk “to keep their state IDs and driver’s licenses” so they can have freedom of movement in New York.

Official: U.S. ends special protection for SalvadoransPresident Donald Trump's administration terminated a program that shielded more than 260,000 Salvadoran immigrants from deportation. The move presents thousands of Salvadorans on Long Island with a crucial decision — whether to prepare to leave, seek another form of lawful residency or fall into illegal status as of the September 2019 deadline. Salvadoran immigrants brace for status decisionA deadline is looming for more than 200,000 mostly adult Salvadoran immigrants who have been ... Trump tweets: End Mueller probe, collusion not a crime, moreSee President Trump's latest noteworthy tweets. Latest news: Trump presidencyGet complete coverage of U.S. politics, including the 45th president, his administration and Congress.