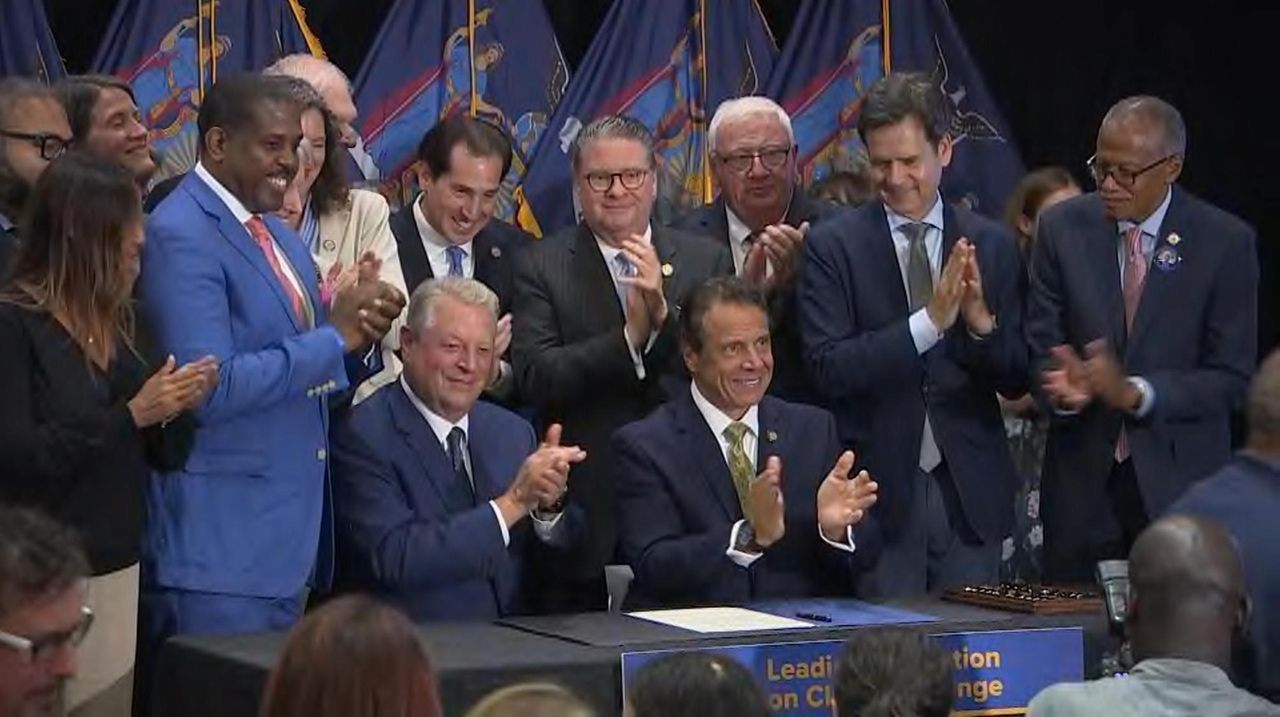 Gov. Andrew M. Cuomo announced Thursday that the state will contract for nearly 1,700 megawatts of offshore wind power, including around half to be connected to Long Island, with projects expected to be in service in 2024. Cuomo said the two projects would power 1 million homes and put 1,600 people to work. Credit: News 12 Long Island

Gov. Andrew M. Cuomo announced Thursday that the state will contract for nearly 1,700 megawatts of offshore wind power, including around half to be connected to Long Island, with projects expected to be in service in 2024.

Cuomo said the two projects — 880 megawatts by Denmark-based Orsted and 816 megawatts by Norway-based Equinor — would power 1 million homes and put 1,600 people to work. Economic activity, he said, would surpass $3.2 billion.

“The actions we take today will be the most consequential of my administration," Cuomo said at a Manhattan news conference.

Former Vice President Al Gore, who attended the news conference, said the two projects combined would constitute the largest offshore wind power infusion in North America. Gore said prices for the wind power around the world are already becoming "cheaper" than conventional sources, and officials at the meeting said New York's wind power would be "competitive."

Lee Olivier, executive vice president of renewable business development with Eversource, which is partnering with Orsted, said the project would connect to Long Island in Holbrook, likely from a South Shore point. New York State would contract for the energy, a large portion of which would come in winter and help reduce the need for natural gas-based energy. The wind power "should displace the old, less-efficient power plants that have higher costs," he said.

Tom Falcone, chief executive of LIPA, said the utility has identified a need for around 400 megawatts of wind power to meet state standards. The remaining power, he said, would be available to the state grid through a LIPA interconnection and sold on wholesale power markets. "It may be landing on Long Island but it may not be under contract to us," he said.

The New York State Energy Research and Development Authority had initially set out to acquire around 800 megawatts of wind power, but so many projects at competitive prices were offered, said a top NYSERDA official, that the state decided to reach for the 1,700 megawatts. Cuomo has set a goal of 9,000 megawatts of offshore wind by 2040, and 100 percent green energy by that year.

Cuomo at Thursday's event also touted his Green New Deal, and signed the Climate Leadership and Community Protection Act, which was passed by the State Legislature in June.

Sen. Todd Kaminsky (D-Long Beach), who attended the event and sponsored the Senate's climate bill, said the infusion of 1,700 megawatts of offshore wind in New York "sends a tremendous market signal" that will lead to lower costs for offshore wind, without sticker shock for customers. "Ratepayers have to be the beneficiaries of this," he said. The measure was sponsored in the Assembly by Assemb. Steve Englebright (D-Setauket).

Equinor's proposal — called Empire Wind — would place 60 to 80 turbines in waters 15 to 35 miles off Long Island, from Long Beach to Patchogue, and connect to the Con Edison grid in Brooklyn. Christer af Geijerstam, president of Equinor Wind US, called Thursday's announcement "a real breakthrough" for the burgeoning U.S. offshore wind industry.

The 816-megawatt project is expected to cost $3 billion to build, he said. Equinor's is the only lease that is in a federally approved New York lease area directly off Long Island in an area known as the New York Bight.

Orsted last year acquired Deepwater Wind, which built the nation's first wind farm off Block Island. Deepwater has a separate contract for a project with LIPA that would bring 130 megawatts of wind power to the South Fork, which is expected to be in service by late 2022, pending a long list of state, federal and local approvals. The project has been beset by opposition to a cable landing in East Hampton.