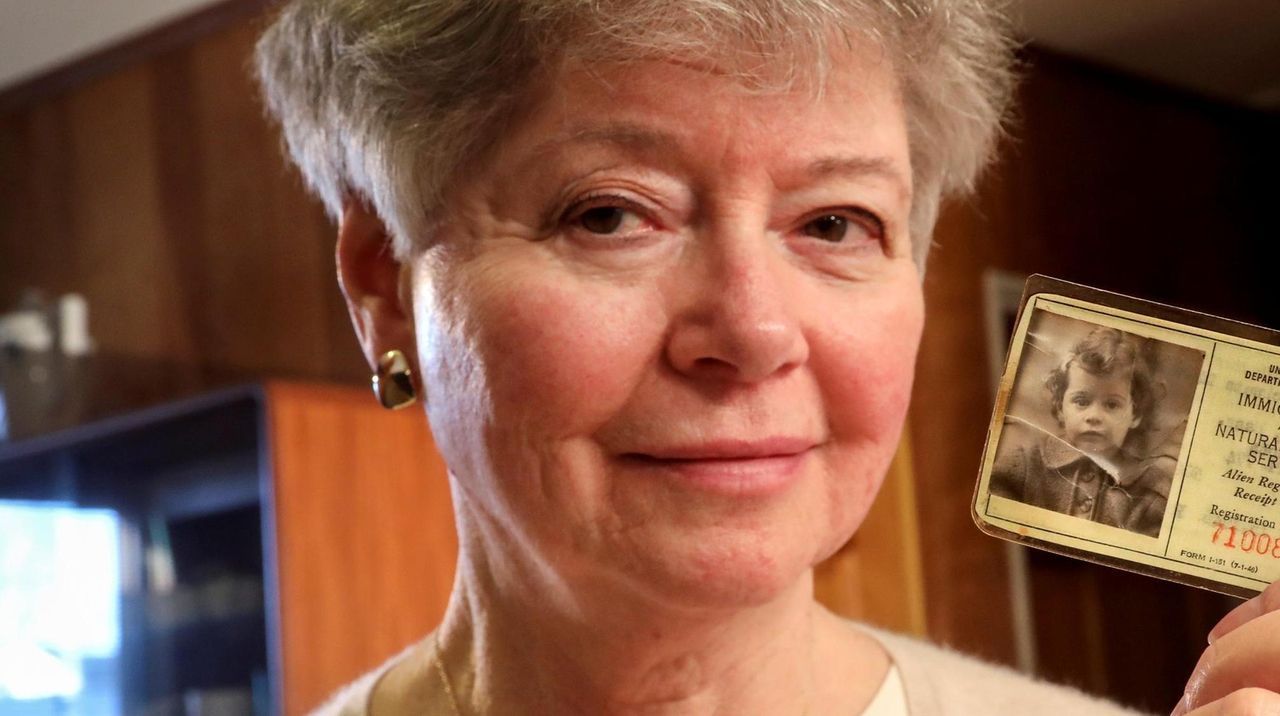 Laura Siegelman of Plainview has lived in the United States since 1948 but says she’s being told she can't prove she's an American. Critical documents needed to obtain a federal REAL ID have been rejected or lost long ago. Credit: Newsday / John Paraskevas

Laura Siegelman of Plainview has lived in the United States since leaving war-ravaged Germany in 1948 as a toddler. She has had a green card for 71 years, a Social Security number for 54 years, and come July she will be married 50 years to a U.S.-born citizen.

At age 73, Siegelman says she’s being told she can't prove she's an American in order to obtain a REAL ID driver's license. Beginning Oct. 1, anyone who flies on a domestic or international flight, crosses a border or wants to enter a federal building or nuclear power plant will need a REAL ID-compliant driver’s license, an “enhanced” driver’s license with most of the same documentation requirements, or a passport or passport card.

Critical documents that Siegelman must show state and federal officials have been lost long ago or rejected by authorities. The few records she had  — her mother fled a Nazi work camp and her father survived the Auschwitz concentration camp — were deemed too old, incomplete, or missing.

“I lived here, I worked, I voted,” Siegelman said. “It comes down to pieces of papers ... and not having these papers sort of erases me,” Siegelman said. “ I understand about security, I really do, but  no one looks at the person having a problem and says, 'is this reasonable?'”

Siegelman is not alone in facing similar problems with the REAL ID. Experts say some legal residents are being hamstrung by lost or no birth certificates, nicknames that stuck as formal names, maiden names swapped for married names and outdated green cards.

“It is certainly causing a lot of problems around the country,” said Jay Stanley, senior policy analyst for the American Civil Liberties Union in Washington, D.C.  “People who were born in rural places where they don’t necessarily have good documentation at birth, or birth certificates were destroyed in fire. It’s a real nightmare for many people who are forced to jump through all these bureaucratic hoops.”

REAL ID “is an imposed, rigid, simplistic structure on the driver’s license process and the real world is a very messy place,” he said.

The REAL ID requires extensive and exacting documents.  These are documents that can easily be lost in dire circumstances, as in the case of adopted children from Vietnam or refugees from Cuba and Bosnia, experts said. Critical records can also be lost through living in poverty, home fires, family moves, divorce, name changes, and by simply failing to secure the records because citizenship had been assumed for decades.

Assemb. Charles Lavine (D-Glen Cove) has worked to try to help Siegelman navigate bureaucracies. “There is always a horrible fear when form becomes more important than substance,” Lavine said. “This is affecting more people that we realize.”

“Federal law requires customers to bring documents to the DMV proving their name and date of birth, among other things, before issuing a federally compliant REAL ID license, regardless of the customer’s circumstances,” said Tim O’Brien, spokesman for the state Department of Motor Vehicles. “States must follow the federal regulations to remain compliant with the federal REAL ID Act."

In response to questions,  the Department of Homeland Security responded with a written statement: "Those in the U.S. lawfully are able to get a REAL ID, although they may need to get certain documents updated or replaced.”

For Siegelman, the problem is that her 1948 green card carries her Polish name of Laja Jochweta Diamant, not the Laura J. Siegelman that appears on her Social Security card, voting record or Medicare card.

She and her husband, Richard, a retired teacher from the Oyster Bay-East Norwich School District, in August began the effort to obtain a REAL ID-endorsed driver’s license, which will be necessary for them visit family and friends in Florida, California and Washington state.

They contacted their elected representatives, scheduled meetings, prodded the memories of relatives, and did research at Plainview-Old Bethpage Library. They said they were told replacing the records, if even possible, could cost hundreds or thousands of dollars.

“There is a deep personal thing here, too,” Laura Siegelman said. “It gives you a sense that the ground beneath you is shifting a little. You are not quite sure of your footing on something you took for granted all your life from age 2. … Questioning my name was deeply insulting, as if I was shady and had some kind of alias.”

The source of Siegelman's problem began in Nazi Germany.

“I don’t want to put it all on the Holocaust, but my parents didn’t get me papers,” she said. “This is not a generation who came in nice and neat from another country. … My parents met in a settlement camp after the war. I was born in 1946. People come from situations like that don’t have neat documentation.”

Her father, Howard Diamant, avoided death at Auschwitz. Her mother, Helen, used her ability to speak Polish, Yiddish and German to escape a labor camp when she learned she was to be shipped to the Treblinka extermination camp. She roamed Poland and Germany and worked for a German family for a time as a maid under the name Chella Wildenberg, hiding her Jewish background.

“My mother managed by literally fleeing in the night from place to place to stay out of the concentration camp,” she said. “She saved her brother, who wanted to give up because they were starving, but she refused,” vowing to see the end of Hitler. “I remember my father’s stories of nearly getting killed in a concentration camp.”

Her parents' birth and marriage certificates were lost in Germany. More family records were lost when relatives died: On her father’s side of the family, three of his four sisters died under the Nazis' control. On her mother’s side, only her mother and a couple of cousins survived. In all, at least two dozen relatives were killed during the war.

Arriving in Boston by boat on Nov. 19, 1948, she received her seven-digit “green card," identifying her as a "perm. res." entitled to live and work in the United States indefinitely.

As “Polish DPs,” or displaced persons under a United Nations program,  the Diamant family needed an American sponsor to move to the United States along with the other 900,000 displaced persons who settled in America. Her family was sponsored by Laura’s aunt in Manhattan and moved to the Lower East Side. Her father worked as a tailor and her mother cared for the children, and later worked as a seamstress.

Her first day in school would hamper her efforts today.

“A teacher had a card and tried to pronounce my first name — Laja. She mispronounced it ...," she remembers. Her teacher changed it to an American name. “Immediately after, I became Laura. Most people didn’t go through legal changes in the court. They didn’t get lawyers. … I have always been Laura. My school records say ‘Laura,’ my marriage certificate says, ‘Laura’ … just about everyone Americanized their names.”

In 1957, the family moved to public housing in Chelsea and then to a more middle-class life in the Bronx.

From there, Siegelman graduated from high school, then The Cooper Union in 1968 with a bachelor of fine arts degree, all as Laura Diamant. She was a commercial artist for a time and in 1970 married Richard, who was “Bronx born,” he said proudly. She wanted to keep a remembrance of her maiden name of Diamant, so on the marriage certificate she went by Laura D. Siegelman, losing the “J” from her Polish middle name. That would prove to be another problem.

More lost or forgotten records followed with her parents’ divorce, and later their deaths. Siegelman said she never saw a divorce decree and the death certificates weren’t enough when she applied for the REAL ID. She never sought a passport when rules were more lax because she never wanted to return to Europe and lacked the papers needed to apply.

“I have a German paper, it was accepted by Social Security,” she said. “And, of course, my green card shows my date of birth ... but when the DMV woman looks at you and says your birth certificate is in German and says, 'This doesn't mean anything to me' ... it was deeply insulting."

The German birth certificate was also accepted in 2008, when she turned 62 and applied for Social Security benefits and in 2011 when she was accepted into Medicare health coverage.

Her 1948 green card carries her seven-digit “alien registration number," but the federal government moved to nine-digits decades later and that became another problem in her effort to get a REAL ID. “They aren’t accepting my green card for anything,” she said. “They say it’s too old. … So, in the end, we are pretty much where we started."

“It’s rejection," she said. "And when you are 73 and have been in this country for 71 years to be told you can’t get on a plane or enter a federal building, what do they think? Even if I never flew in my life, this would bother me.”

“If anyone deserves not to get caught up in a bureaucratic nightmare, it is Laura Siegelman," said Rep. Tom Suozzi (D-Glen Cove).

Astorino to launch GOP bid for New York governor
Nursing homes face historic vacancies, raising concerns
Bills aimed at police misconduct advance in Albany
State: Virus positivity rate at 1.27%, the lowest since Oct. 22
1:37
When was the last time you saw a dentist? COVID-19 fears take toll on care
New York yet to get rent relief money out the door
Didn’t find what you were looking for?