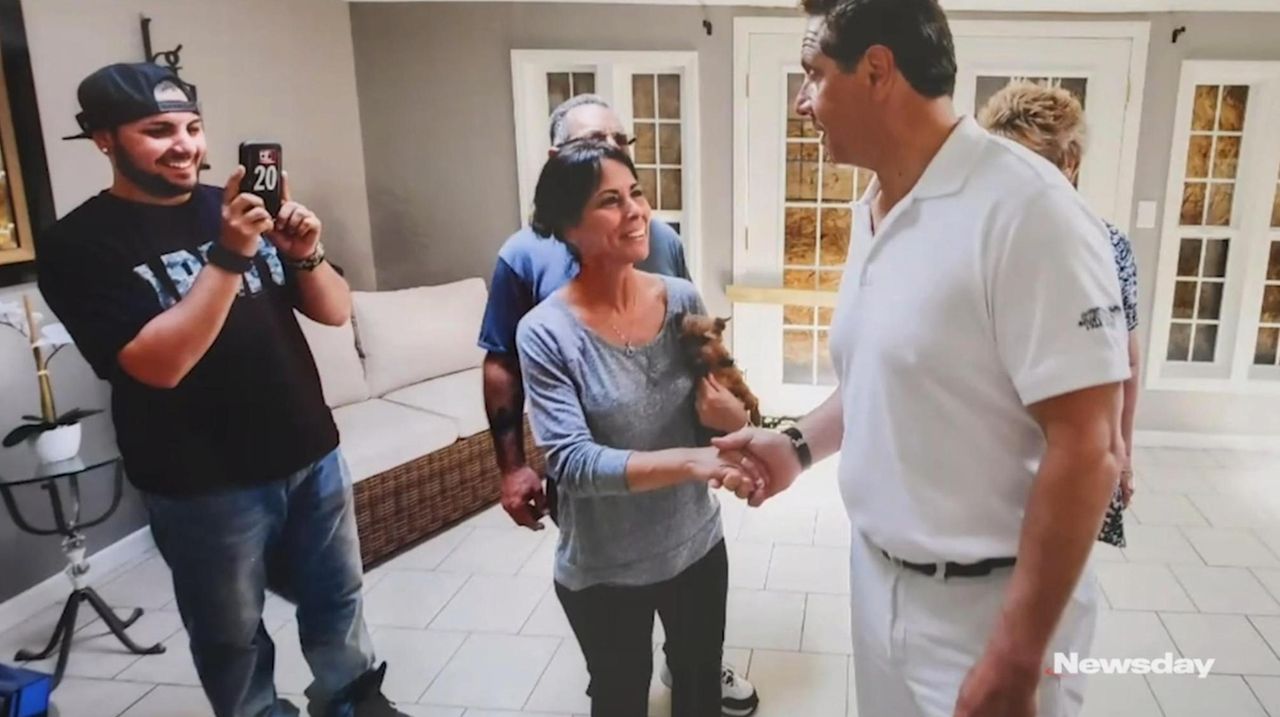 Sherry Vill, from Greece, N.Y., says the incident happened when Gov. Andrew M. Cuomo visited her home after flooding near Lake Ontario in 2017.

A Rochester-area woman on Monday became the latest to accuse Gov. Andrew M. Cuomo of harassment, saying the governor grabbed her face and kissed her cheek during a 2017 tour of flood-damaged homes.

Sherry Vill, 55, a resident of upstate Greece, made the allegations during a news conference with her attorney, Gloria Allred, who has represented clients in a number of high-profile harassment cases. Vill said Cuomo kissed her cheek twice during the visit, once inside her house and once outside, and in front of family members.

Vill said she immediately thought the action inappropriate — a "highly sexual manner" — and not just an "old-fashioned" way of greeting people, as the governor has sought to characterize his actions in other complaints.

"While still holding one of my hands, he forcibly grabbed my face with his other big hand and kissed my cheek," Vill said. "I felt like I was being manhandled."

Vill, who stands about 5 feet tall, said the governor towered over her.

"The way he looked at me and his body language made me very uncomfortable," Vill said. "I felt he was acting in a highly flirtatious and inappropriate manner, especially in front of my family and neighbors."

A lawyer representing Cuomo said there was nothing untoward about the governor's greeting.

"During times of crisis, the governor has frequently sought to comfort New Yorkers with hugs and kisses," attorney Rita Glavin said in a statement. " As I have said before, the governor has greeted both men and women with hugs, a kiss on the cheek, forehead or hand for the past forty years. I encourage everyone to look at other photographs from his visit to Greece, N.Y., that day. Nothing described at today's press conference was unique in that regard."

Glavin sent reporters a link to a series of photos of Cuomo's visit to Greece that day, including some showing him hugging other women residents and kissing another on the cheek.

Vill said she’s been in business for years, interacting with male customers and vendors: "I know the difference between an innocent gesture and a sexual one. I never felt as uncomfortable as the day Governor Cuomo came to my home."

Allred said Vill will be contacting state Attorney General Letitia James, whose office is overseeing an investigation of the harassment claims against Cuomo. Allred said they have no plans at this time to talk to attorneys conducting a separate impeachment investigation led by the State Assembly, though she didn’t rule it out.

Cuomo has been accused by a series of women — three of them former staffers and two current aides — of unwanted sexual advances and comments. The Assembly probe is focusing not only on the harassment complaints but the Cuomo administration’s handling of COVID-19 and nursing homes.

The Democrat, now in his third term as governor, has denied touching anyone inappropriately or making inappropriate advances. He has said his welcoming manner to women outside of the executive chamber — a kiss on the cheek, an arm around the lower back for a photo — were just an "old-fashioned" way of greeting.

He has brushed aside calls to resign from Sens. Charles Schumer and Kirsten Gillibrand and numerous state legislators.

After the governor's visit to her home, Vill said her friends and neighbors began teasing her as the "governor’s new girlfriend."

She said a member of the governor’s staff later contacted her to invite her to a Cuomo event, which she declined. Weeks later, the governor sent a letter addressed to Vill alone — omitting other family members he met — saying that it was a pleasure to meet her and that his administration would continue to provide support to area homeowners.

"Notably, he didn’t say my husband and I, or my family and I, only specifically me," Vill said. "I purposely did not respond to the invitation. I felt very uneasy about the call. I was the only one who received the call and the personal invite from the governor."

Glavin, Cuomo's attorney, countered: "It is common for staffers to contact constituents after events and invite them to a future event on a related topic." She said a letter later sent to Vill is nearly identical to 30 others he sent to people in the area following the flooding.

Allred said Cuomo’s explanation of his greeting doesn’t defend his actions and doesn’t comport with anti-harassment training the governor himself and other state officials must take.

"The governor is an attorney. He is the former attorney general of New York. He is the employer of all the employees in the state of New York," Allred said. "I don’t think it is appropriate for anyone to say they’re ‘old-fashioned’ and they’re not clear about what behavior is expected. The training is clear."