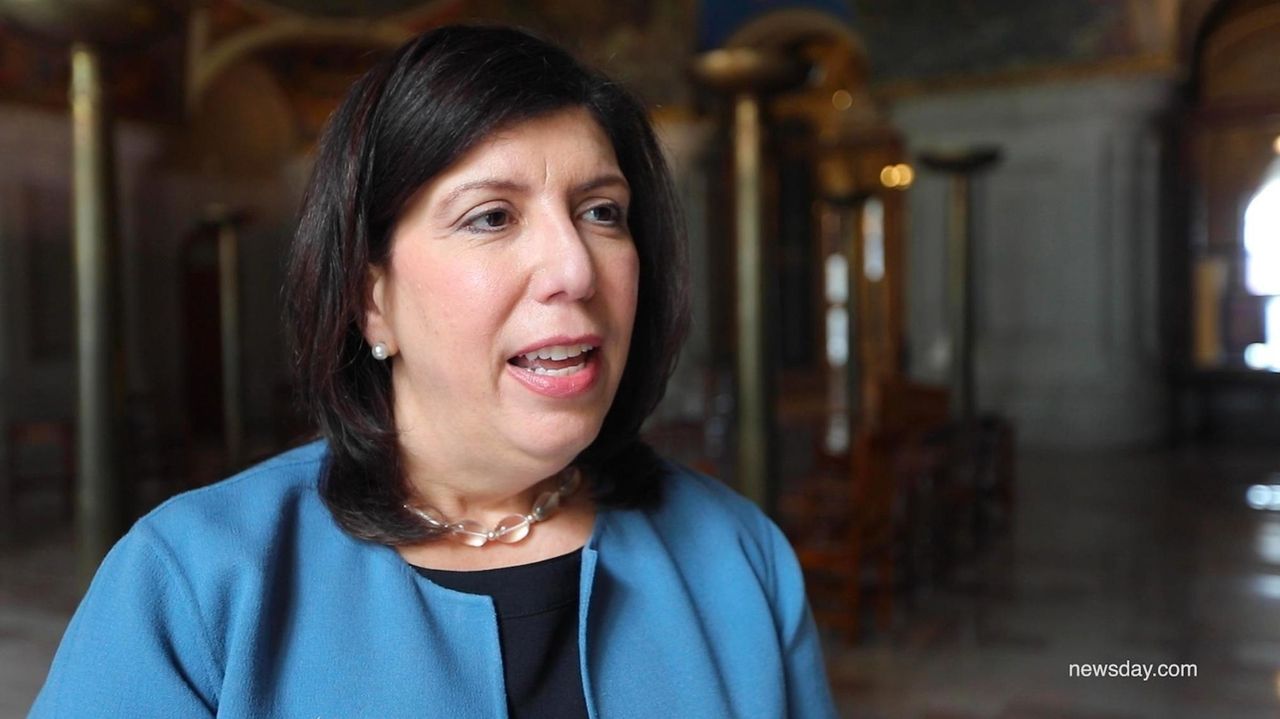 After a confirmation hearing where progressives voiced their opposition, citing Madeline Singas' past as a prosecutor, Newsday interviewed the Nassau County district attorney just before she was confirmed as a judge to New York State's Court of Appeals. Credit: Newsday / Jeffrey Basinger, Faith Jessie

ALBANY — The State Senate confirmed Madeline Singas as a judge on New York’s highest court after a testy confirmation hearing Tuesday, filling a key vacancy with a prosecutor and triggering an election this fall to select a new Nassau County district attorney.

Progressives opposed Singas in part because they didn’t want another prosecutor added to the seven-member Court of Appeals.

Some Republicans voted no — not personally opposing Singas but contending Gov. Andrew M. Cuomo, while under an ongoing impeachment investigation, should not be allowed to appoint any judges to the Court of Appeals because it could become involved an impeachment trial.

But in the end, the Democratic-dominated Senate voted, 37-26, according to the final but unofficial tally, to confirm Singas, a Democrat. She replaces Leslie Stein, also a Democrat, who had retired effective last week.

Progressives peppered her with questions during a testy, 90-minute screening with the Senate Judiciary Committee — such reviews often take just 10 or so minutes. They questioned her views on recent landmark changes to the state’s bail laws, her record as a prosecutor and her lack of judicial experience. Sen. Alessandra Biaggi (D-Pelham) said Singas’ was "unfit" for the court.

Many Republicans said no Cuomo nominees should be approved while he is under investigation by an Assembly impeachment committee for allegations regarding sexual harassment, his $5.1 million book deal and his administration’s handling of COVID-19 in nursing homes.

Jurors at an impeachment trial would be state senators and the judges of the Court of Appeals, they noted.

Long Island Democrats vouched for Singas and pushed back against critics of their own party.

"She has been as progressive as you can be in a county like Nassau," said Sen. Kevin Thomas (D-Levittown).

"No one has more integrity. No one has more respect from her peers, both prosecutors and defense attorneys," Sen. Todd Kaminsky (D-Long Beach), who worked under Singas when they were assistant district attorneys in Queens.

Singas, during the screening, told senators that it wasn’t "fair to be placed in a box because of my profession" and said she would judge each case on the merits.

"The minute I am confirmed, my prosecutor’s hat comes off and stays off," Singas said.

And because she is resigning her Nassau post more than 90 days before the next general Election Day, election law experts have said the county will have to hold a special election to replace her.