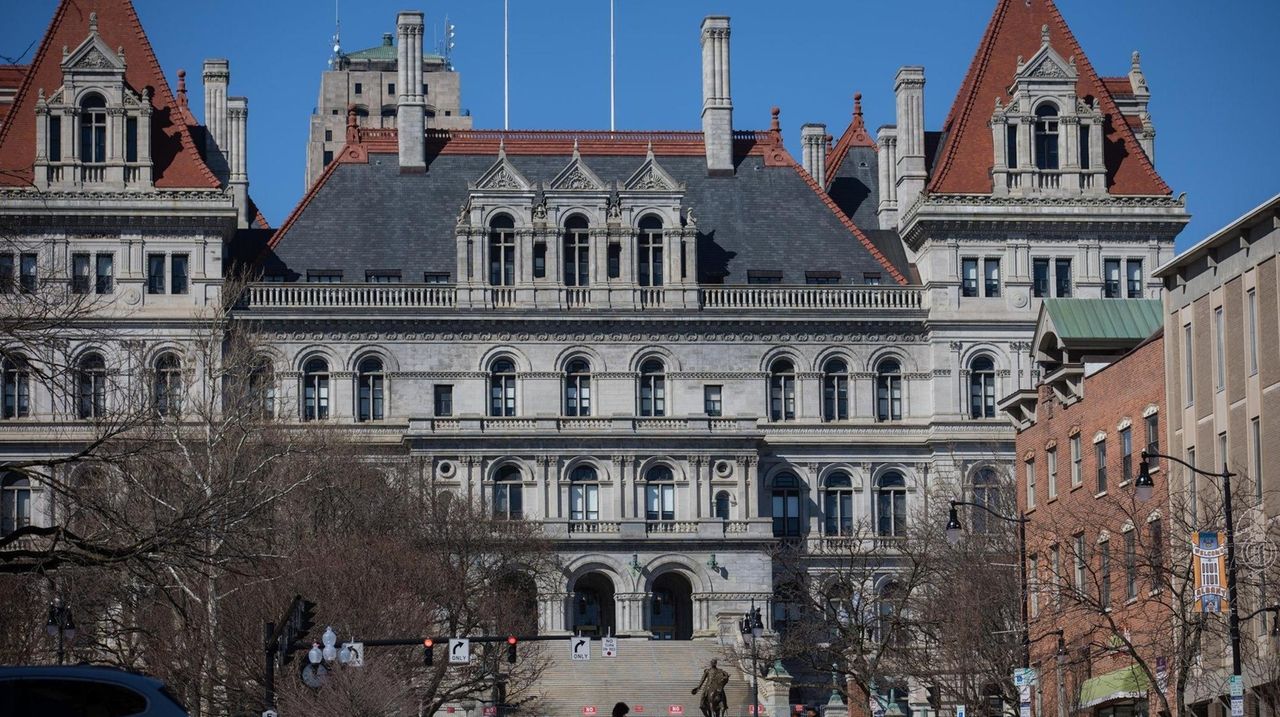 Newsday's Michael Gormley breaks down the New York State budget adopted this month with an $18 billion increase in spending. Some analysts say it could steer New York toward a fiscal cliff, while supporters say it seizes the moment of the financial crisis created by COVID-19 to invest in a better, post-pandemic New York. Credit: Newsday / Michael Gormley

ALBANY — The state budget adopted in April with an $18 billion in increase in spending has been billed by supporters as seizing the moment of the fiscal crisis created by COVID-19 to invest in a better post-pandemic New York.

But some independent analysts said in interviews with Newsday that the huge spending plan could lead New York to the brink of a fiscal cliff.

"It’s a great day in the state of New York today, a great day of progress," Gov. Andrew M. Cuomo said April 7 as legislators passed the budget agreement. "It is the most important plan that the state had done … we have opportunities that we never had before."

The Democratic-led Legislature, led by its increasingly powerful progressive wing, raised spending by 8.6%, the biggest jump since 2007, according to the independent Citizens Budget Commission. For 10 years under Cuomo, state budgets rose around 2% annually.

The final $212.2 billion budget includes $2.7 billion from an increase in income tax for filers making more than $1 million a year, at least until 2027. That replaced the 2009 temporary surcharge on millionaires, extended by Cuomo, that would have expired. The budget also includes $750 million from an increase in the corporate franchise tax on companies making more than $5 million a year in profit, which is scheduled to sunset in 2024.

That $3.5 billion increase in taxes in 2021 will grow to $4.3 billion in 2022 and will make New York City millionaires the highest-taxed Americans in the nation.

Cuomo said the budget "anticipates" that Congress and President Joe Biden will eliminate the cap on federal income taxes of state and local property initiated by former President Donald Trump. That would lower the federal income tax on high earners in high-tax areas such as Long Island and keep some wealthy New Yorkers from moving. But Democrats in Washington are divided on whether to end the cap.

"I think it’s silly," Richard Ravitch, the former lieutenant governor, said of the new budget's large increase in spending and the further taxing of wealthy New Yorkers. Ravitch was a key player in saving New York City and the Metropolitan Transportation Authority from financial ruin beginning with the 1970s fiscal crisis.

"I’m a liberal Democrat and I ain’t moving anywhere. But I know a lot of people are … and that’s not good for New York City. This is not a time for a liberal agenda."

Some other fiscal analysts outside Albany remember those hard decisions by Ravitch and Gov. Hugh Carey during New York City's fiscal crisis and wonder if the lessons have been forgotten.

Those lessons include the eventual cost of popular progressive policies, a rise in costly benefits for public union members, the added cost of delayed transportation maintenance and mass transit spending, the need to heed demographic trends such as the flight from the city to the suburbs and the loss of employers to lower-taxed Southern and Western states.

These are among the concerns that critics have today with the state's 2021-22 fiscal plan. "Who is thinking of the consequences on the New York economy?" said Gerald Benjamin, a distinguished professor of political science at SUNY New Paltz. "It seems to me the cultural memory of that time has faded, or become irrelevant."

The issue is whether the state would be able to pay for its expanded programs once the billions of dollars in one-time federal pandemic aid is exhausted in two years. And if a large number of New York's wealthiest taxpayers leave the state for lower-tax havens, the state would see declining tax revenues.

"We are very reliant on federal aid. When that runs out, do we fall off the cliff, or tax further? That may be unsustainable," Benjamin said.

"Leaders agreed to raise personal income and business taxes and to use some portion of federal funds to inflate spending that likely cannot be supported in the out-years," said Andrew Rein, president of the independent Citizens Budget Commission. "The tax increases simply are unnecessary and economically risky."

E.J. McMahon of the Empire Center, a conservative think tank, said the rosy trajectory Cuomo predicts is instead "a death spiral."

He said that while the state has committed to large spending increases on education and other areas, New York is hoping to pay for it all with uncertain projections of the revenue from the new increases.

"The budget is a mid-2020s fiscal disaster in the making: an incomplete bridge over a deepening river of red ink," McMahon said. "The budget’s short-term federal cash surplus could mask underlying structural gaps ranging from $5 billion to more than $10 billion."

Over most of 2020, Cuomo had forecast a tanking economy that he said was so dire that no amount of taxing and cuts would be enough to create a balanced budget. But an early start to an economic rebound and the arrival of once-uncertain federal aid have created a flush moment.

What Cuomo once called costs, he and legislative leaders now call investments. Their budget includes $8 billion in new spending on longtime progressive goals such as education, construction, helping workers and renters slammed by job loss due to COVID-19, fueling green economy jobs, the biggest construction plan in state history, and health care.

Some support that strategy not just for the public good, but for the economy.

"Economists would never talk about spending too much," said Frederick Floss, professor and chairman of the Economics and Finance Department at the University at Buffalo. "They talk about, ‘Does the spending outweigh the benefits.’ So, it’s not about total dollar amount. It’s how you spend it."

He said tenants, the working poor and many middle-class families who lost jobs or working hours during the economic shutdown need the compensation in the state budget in part to avoid longer-term reliance on social services.

"These people would have ended up out on the street because they were evicted or lost their jobs and that could have pushed the economy back months and may have messed up the financial system," Floss said.

He is also among those who doubt the wealthiest New Yorkers will flee the state.

"The wealthy can look at this as an investment," Floss said. "Are we going to fix roads and bridges or am I going to have to pay for costly repairs to cars and trucks? Am I going to have a health care system so my workers are healthy and come to work? These are things even wealthy people have to ask themselves when they make decisions on where to locate their business."

Like Ravitch, Floss looks to the past for lessons. But Floss looks at the building boom in the 1960s under Gov. Nelson Rockefeller that created SUNY and the City University of New York and completed the state Thruway.

"Those were highly profitable things over time," Floss said.

Charles Khan, of the progressive Strong Economy for All Coalition, said the spending is needed and overdue after what he called a decade of austerity budgets.

"This victory is only a down payment," he said.

Fitch Ratings is preparing a more definitive review of the budget. Fitch is a global research and credit-rating services agency that analyzes finances to help set the borrowing power of companies and governments.

"We view New York as having a lot of risks still as it goes into this recovery," said Fitch’s Doug Offerman, lead analyst for New York State.

"A key question we have for New York State and for other states is whether all this pandemic recovery funding is enough and what it supports," Offerman said. "Does it give rise to what we call a fiscal cliff as the federal money runs out? If that money is used to support programs that are ongoing programs, then state revenue has to continue. This is a real question for us."

Fitch so far has given the state a top credit rating, but with a negative outlook. That reflects past strength in fiscal controls created by former Gov. David A. Paterson and Cuomo that allowed for handling future "bumps in the road."

There is a "concern the crisis might weaken its commitment to this improved budget management," Offerman said. "But now we’ll see how that looks going forward."