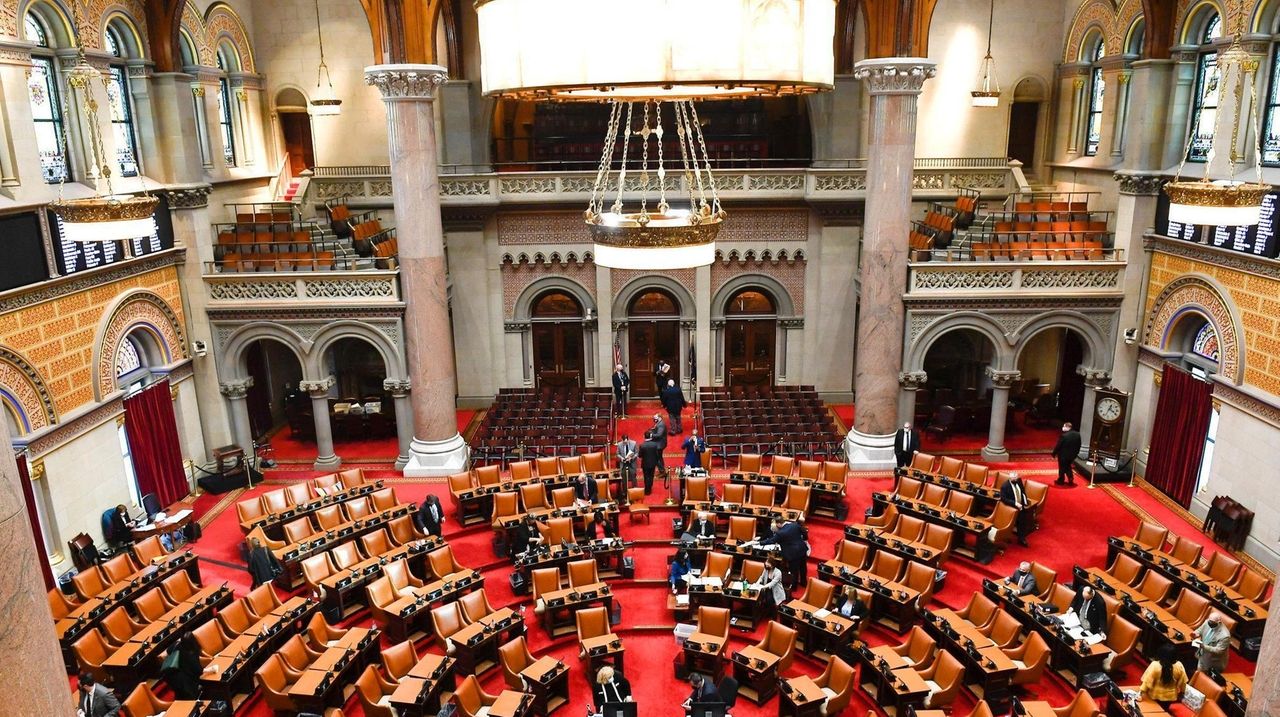 ALBANY — The State Assembly slogged 10 hours through the day Wednesday to give final passage to a $212 billion state budget, containing an $18 billion spending increase fueled by federal help and new taxes on corporations and the wealthy.

The state Senate, which is less than half the size of the Assembly, finished passing the 10 bills that compose the state budget after 3:30 a.m. Wednesday. The Assembly had worked until 2 a.m. Wednesday, adjourned, returned in the afternoon and finished just after 11 p.m.

The 2021-22 budget, which was due April 1, provides an 11% increase in funding to school districts overall and 13% for Long Island. And it reflects priorities of a Democrat-dominated Legislature's response to the COVID-19 pandemic.

It also provides more than $3 billion in rental and small business assistance to tenants and owners hit hardest by the pandemic. It creates a $2.1 billion fund for "excluded workers," primarily people who are in the country illegally who lost their jobs during the pandemic.

"Budgets are a statement of values, and in my two decades of service to the people of New York I can’t think of a more far-reaching and impactful budget than this," Assembly Speaker Carl Heastie (D-Bronx) said in a statement. "I am particularly proud that we have been able to make historic investments in our schools, keep higher education within reach, deliver the relief that our small businesses need to get back on their feet, and provide critical funding for child care that families need to get back to work."

New York raised taxes despite receiving more than $12.6 billion in the most recent federal stimulus package.

Republicans, in the minority in both houses, said the "runaway spending" and tax hikes were irresponsible and would trigger more residents to move out of state. During debate on the bills, they got Democrats to acknowledge that the nearly $4 billion increase in tax hikes was likely a record.

"At a time when our state received billions in aid from the federal government, they continue to do what they do best — spend irresponsibly and raise taxes," Assemb. Melissa Miller (R-Atlantic Beach) said of the Democrats. "The last thing we need is to put a greater tax burden on our residents. To top it off, the budget this year is the largest in our state’s history and makes the list for the top 10 highest budgets in the world."

LI schools getting a $400M hike in state funding next yearTotal dollar assistance to public pre-K-12 education in Nassau and Suffolk counties is due to rise by 13% next year, to a total of more than $3.6 billion, according to the state. NYS to still fully tax jobless benefitsThe 2021-22 NYS budget makes no change in the taxable status of unemployment benefits despite the federal tax exemption on the first $10,200 received last year.

1:54
'Let's vaccinate them at the schools': NY's vaccine push focusing on students
State figures: NY nursing home staff lagging in COVID-19 vaccinations
1:54
Cuomo: NYS allocating vaccines for colleges and universities
Top photos from around LI, NYC from March 2021
2:32
'Excluded Workers Fund' could bring $251M to local economy
After Scott Rudin bullying exposé, there are mostly crickets
Didn’t find what you were looking for?