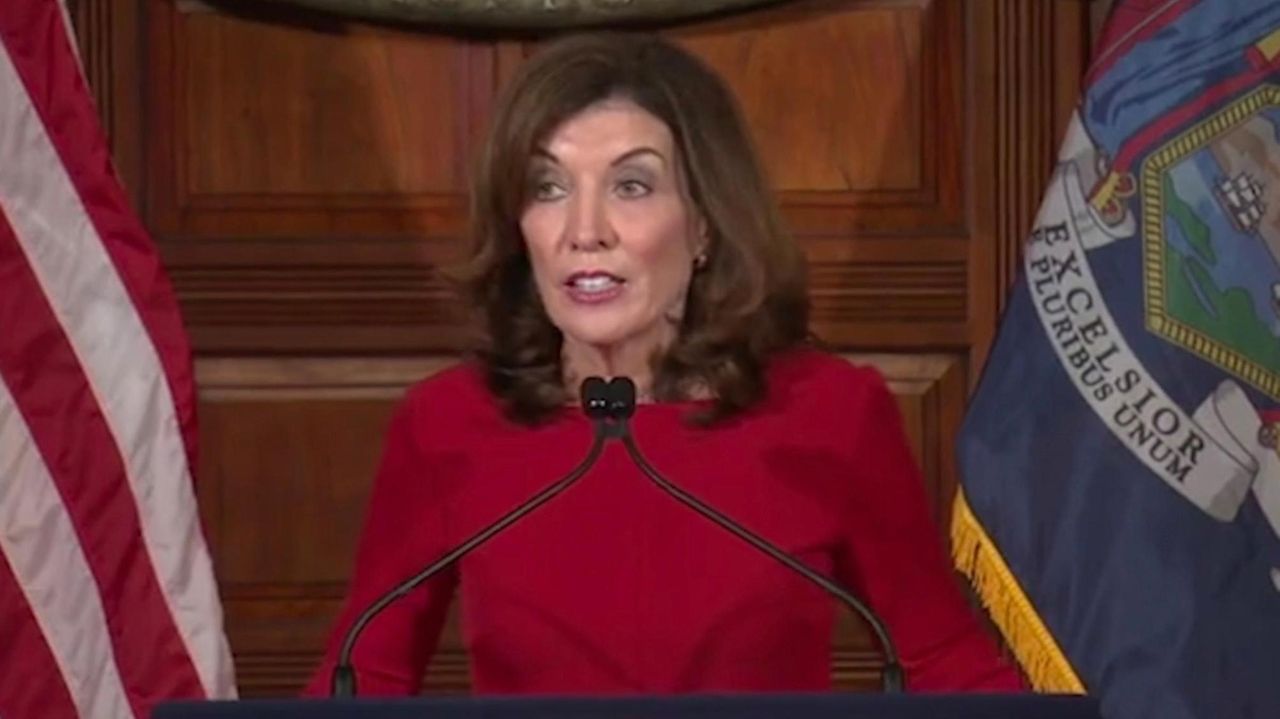 ALBANY — Gov. Kathy Hochul on Tuesday called for a special session of the State Legislature to extend the state’s moratorium on tenant evictions, allow local governments to continue to meet remotely and jump-start the process of legalizing marijuana sales in New York.

Hochul and legislative leaders have agreed to convene Wednesday to extend the eviction moratorium — set to expire midnight Tuesday — until Jan. 15.

The Democrat said the extension was necessary because the state has distributed a pittance of the $2.4 billion in federal aid New York received to provide to renters and landlords. The governor, on the job now eight days, didn’t call her predecessor, Andrew M. Cuomo, out by name but said the state "failed" in its duty to deliver the money in a timely fashion before the slated end of the moratorium.

"We are not going to abandon our neighbors in the state of New York," Hochul said, "especially, especially when we failed to get the money out."

The extension is a step that tenants and progressive legislators are calling necessary and one that landlord groups and many Republicans say isn’t.

The moratorium was put in place to protect tenants who lost income because of the pandemic. Some lawmakers and advocates now want a lengthy extension because the state has had problems distributing federal aid meant to help tenants and landlords.

The state received $2.4 billion in federal aid but had distributed, under Cuomo, just 10% of it as of mid-August. Hochul promised to speed up checks getting out the door when she took over as governor on Aug. 24.

Adding to the complications, early this year the U.S. Supreme Court struck down a portion of New York’s moratorium, which gave tenants the power to block eviction proceedings simply by signing a form declaring that they had a financial hardship because of the pandemic. The court said landlords were entitled to challenge such declarations in court.

"Cannot sufficiently express how urgent it is … that the state legislature reconvene to pass new legislation that would keep people in their homes and protect New Yorkers from eviction," Sen. Julia Salazar (D-Brooklyn) wrote on Twitter Friday.

Legislators are considering changing the law to give landlords rights to challenge hardship declarations, officials said. They also want to push the moratorium end date into January because that’s when the Legislature is scheduled to return to Albany for the 2022 session.

But landlord groups aren’t happy about it.

"Financially desperate tenants and landlords don’t need a special legislative session, they need Albany to get the billions of dollars from the federally funded Emergency Rental Assistance Program out the door — yesterday, last week, two months ago," said Joseph Strasburg, president of the New York City-based Rent Stabilization Association, the state’s largest organization of building owners. "The mass eviction hysteria narrative would be eliminated and tenants would be protected in their homes if state government was doing its job."

Landlords noted that renters, if they apply for the aid, are protected from eviction until their case is resolved. The former group also said courts are so backlogged it takes months just to get an eviction hearing scheduled, meaning there will be no surge in evictions.

"There is no need to continue the open-ended, blanket moratorium. More delay will not cause a spike in applications as those eligible tenants have already applied and await approval from New York State," said the Coalition of Western New York Property Owners.

Rent won’t be the lone topic of the special session.

Hochul said lawmakers have agreed to approve legislation to amend New York’s open meetings law to allow local governments to continue to meet remotely during the pandemic. Previous legislation on the subject had expired, officials said.

The new legislation might also cover some state agencies, according to officials.

Finally, Hochul also will announce nominations for the state’s cannabis management board, an entity Cuomo created but hadn’t filled. The board is supposed to oversee the state’s intention to greenlight commercial sales of marijuana by next year but had been stalled because Cuomo never made any appointments. Potential sellers and growers had said the delay stymied the development of regulations and threatened to push back the start of sales.