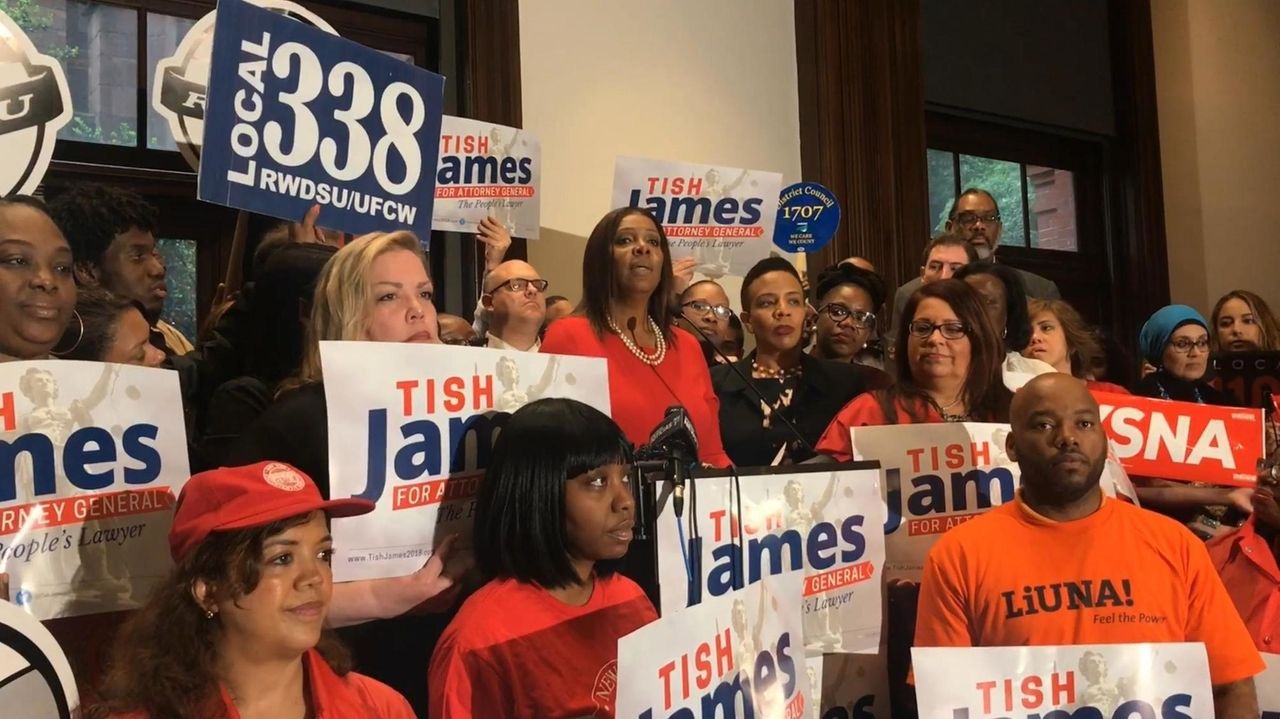 New York City Public Advocate Tish James, promising to “stand up to the forces in Washington who seek to move us backwards,” launched her campaign for state attorney general Wednesday.

Without mentioning President Donald Trump by name, James, 59, said she would “carry the mantle of the work of the current office” — whose occupant until he resigned May 8, Eric T. Schneiderman, had positioned himself as a legal riposte to Trump. Schneiderman stepped down over allegations he physically abused his romantic partners.

“We find ourselves in a very precarious time in this country — at a time when we should use the shield of the law to protect New Yorkers from the sword of injustice,” said James, a Brooklyn Democrat.

If elected, she said, her tenure would focus on enforcing laws relating to voting, the environment, consumers and civil rights.

“I will take on ICE agents who seek to rip families apart,” she tweeted, a reference to Trump’s policies of strengthening immigration enforcement.

James was a city councilwoman from 2004 until 2013, when she was elected public advocate, a post that puts her first in line to succeed the mayor.

“The law should be an instrument for change,” James said. “The law must be used as a vehicle to right wrongs.”

James made the announcement Wednesday afternoon at the Brooklyn Historical Society, where supporters chanted “Run, Tish, run!” and held up signs touting James as “The People’s Lawyer.”

James is declining to seek the endorsement of the Working Families Party, whose nod she has long secured, after Gov. Andrew M. Cuomo reportedly threatened to withhold his support if she sought it. Both she and Cuomo have denied that Cuomo made the demand. WFP declined to endorse Cuomo’s re-election because the party, which is left-leaning, says he is insufficiently liberal and broke his word.

Schneiderman, a Democrat, resigned May 8, after an article in The New Yorker magazine quoted four former romantic partners accusing him of physical abuse.

Schneiderman’s resignation left his office’s solicitor general, Barbara Underwood, as the interim attorney general; she has said she wants to stay in the interim job.

A bipartisan panel of the State Legislature conducted interviews Tuesday and Wednesday with candidates, including Underwood, to serve out Schneiderman’s term, though not beyond. Last week, James withdrew herself from consideration for interim attorney general.

The primary election is Sept. 13; several other Democrats have signaled interest in running, and Manny Alicandro, a Wall Street lawyer and onetime stand-up comic, is in the race as a Republican.