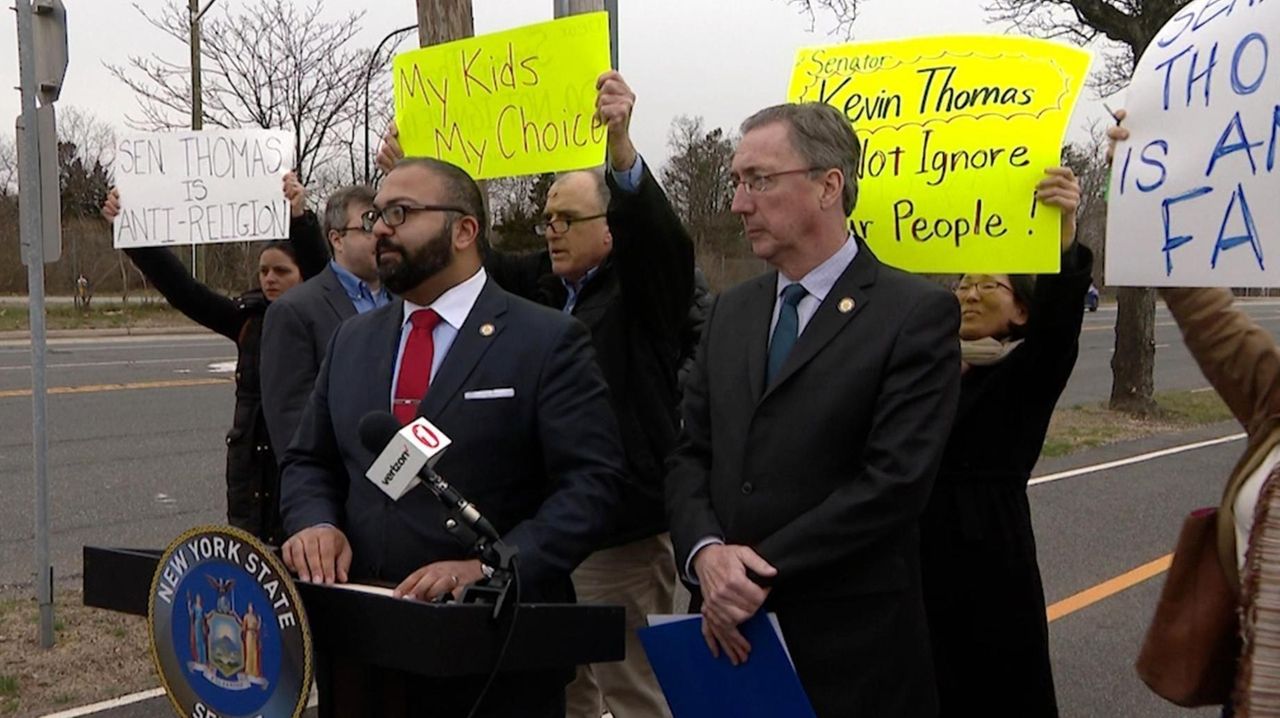 Protesters gathered in East Meadow on Friday to protest the proposed bills in Albany that would eliminate religious exemptions for vaccines. Credit: News 12 Long Island

ALBANY — New York lawmakers say there is a new urgency to approve pro-vaccination legislation in the wake of measles outbreaks in the Hudson Valley and Brooklyn.

One proposal would end exemptions for childhood vaccinations based on nonmedical — often religious — reasons. Another would allow minors who are 14 years and older to get vaccinated without the need for parental approval.

Backers said measles has spread because of disinformation about vaccines and exploitation of a provision in state law that allows people to forgo vaccinations for religious reasons.

“We kind of had measles eradicated. Now it’s back,” said Sen. Kevin Thomas (D-Levittown), co-sponsor of the bill to end nonmedical exceptions. “People are abusing this religious exemption … Anyone who has a philosophical difference (regarding vaccinations) can use it to refuse to vaccinate their children.”

It is unclear, however, whether the pro-vaccination bills will win approval before the state legislative session ends in June.

On Tuesday, New York City declared a public health emergency over a measles outbreak that has affected an ultra-Orthodox Jewish community in Brooklyn’s Williamsburg section. Mayor Bill de Blasio took the unusual step of ordering mandatory vaccinations in the neighborhood where there are 285 confirmed cases of measles dating back to October. Officials blamed the outbreak on "anti-vaxxers" spreading false information.

Two weeks ago, Rockland County officials declared a similar health emergency where there have been more than 150 confirmed cases. Earlier in March, a federal judge banned 50 unvaccinated students from attending school for three weeks.

Legislation intended to raise the vaccination rate has stalled in the state Assembly and Senate over the last four years. But the measles outbreaks should create momentum to act, some lawmakers said.

“I think this should wake up everyone to the fact that lower vaccine rates can lead to these diseases being more easily spread,” said Assemb. Jeffrey Dinowitz (D-Bronx), primary sponsor in the Assembly of the bill to end religious exemptions for vaccinations.

He said “anti-vaxxers” have spread “outright lies” about vaccinations causing autism, among other things. He said vaccines have “save millions of lives over the years.” He said his bill effectively would block unvaccinated children from attending school.

Gov. Andrew M. Cuomo, in a radio interview Tuesday, didn’t say whether he would support or oppose the legislation. Instead, he said the issue raises constitutional issues.

“Look, it’s a serious public health concern, but it’s also a serious First Amendment issue. It is going to be a constitutional-legal question,” Cuomo said on WAMC, an Albany-based public radio network.

At the same time, two Long Island senators are backing a separate bill that would continue the religious exemption but standardize the process for making such claims. The process differs from school district to school district now, said Sen. Phil Boyle (R-Bay Shore), who sponsors the bill with Sen. Monica Martinez (D-Brentwood).

"I strongly believe that parents should have their children vaccinated and our students need to be protected," Boyle said in an email. "But the state Legislature should not be eliminating the nonmedical exemptions through a law."

Separately, another bill would allow minors who are 14 years and older to get vaccinated without the need for parental approval. In March, Ethan Lindenberger, an 18-year-old Ohio resident, made headlines by testifying before Congress about getting his shots over the objections of his anti-vaxx mother. Legislators said older teens should have the same choice.

“Older teenagers, in consultation with their health care providers, should have the freedom to make their own decisions about whether or not to protect themselves from long-term health risks by getting vaccinated,” Sen. Liz Krueger (D-Manhattan) said when introducing the bill in the Senate.