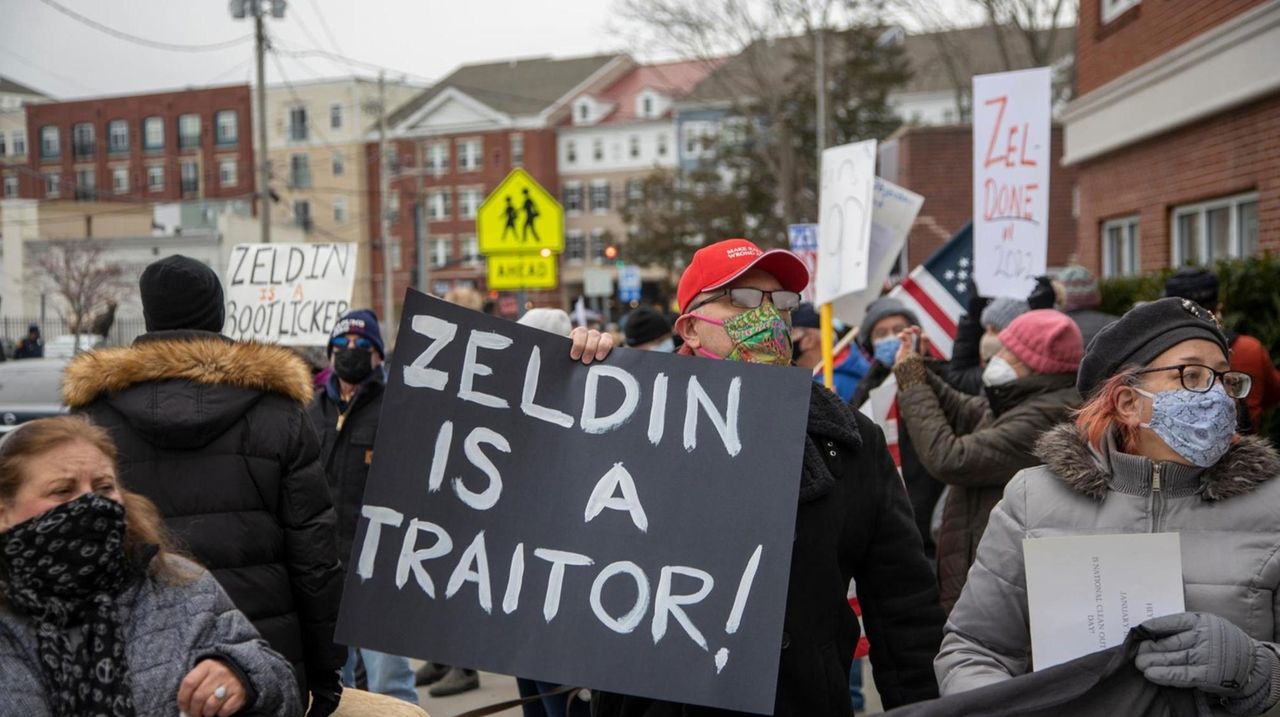 WASHINGTON — Rep. Lee Zeldin (R-Shirley), a strong supporter of President Donald Trump, has faced growing backlash and calls among critics to step down from office in the wake of last week’s attack on the U.S. Capitol by Trump supporters.

Zeldin was among the 121 House Republicans who voted last Wednesday to object to the certification of President-elect Joe Biden’s Electoral College victory, a move championed by Trump, who has falsely claimed he won the election.

Zeldin defended his challenge of the Electoral College results, saying in a nearly 5-minute speech on the House floor that it was his "duty to speak out" about the allegations of fraud and malfeasance that Trump has repeatedly floated.

Since the siege on the U.S. Capitol, a group of local progressive Democrats have started an online petition calling for Zeldin’s ouster that has collected more than 1,700 signatures, dozens of protesters gathered outside of his Patchogue office Monday demanding his expulsion from Congress, and New York State Democratic Chairman Jay Jacobs last week called for Zeldin to resign.

John Feal of Nesconset, a prominent advocate for 9/11 first responders, announced he is considering a run against Zeldin should he seek reelection in 2022, and the Long Island Federation of Labor, one of the region’s largest union groups, also called for Zeldin’s resignation in an open letter.

"The fact that Lee Zeldin has done nothing but to be supportive of President Trump’s false allegations is a disgrace, and undermines everything that we as a nation stand for," said John Durso, president of the federation which has some 250,000 members.

A group of Riverhead activists also have filed formal complaints with the Inspector General of the U.S. Army Reserve, calling for an investigation into Zeldin’s actions following the election. Zeldin, a veteran of the war in Iraq, serves as a lieutenant colonel in the reserve.

Ian Lyons, co-president of the Riverhead Policy Group, in a letter to the inspector general provided to Newsday, said Zeldin’s is "undermining the United States electoral process, and the Constitution itself, despite his sworn oath to protect it."

The U.S. Army Reserve Public Affairs Office did not immediately respond to a request for comment.

Zeldin won a fourth-term in November in a campaign that touted his close ties to Trump. He defeated Stony Brook University scientist Nancy Goroff, receiving 55% of the vote compared with Goroff's 45%.

He did not agree to be interviewed for this story, but his spokeswoman Katie Vincentz in a statement said that congressional Democrats in the past also have raised objections during the counting of the Electoral College votes.

"Anyone who wants to call on a Congressional Republican to resign for supporting an objection on January 6th needs to put up their past statements calling for the resignation of every Congressional Democrat who objected in the past," Vincentz said.

Feal, who lobbied lawmakers for years to permanently fund the 9/11 Victims Compensation Fund and succeeded in that effort in 2019, said he had a friendly working relationship with Zeldin, but said Wednesday’s attack by Trump supporters was an insult to the 9/11 first responders who have walked the halls of Congress seeking support.

"Lee Zeldin is not loyal to the people in the first [congressional] district; he’s loyal only to Donald Trump, who is a con man," Feal said.

Suffolk GOP Chairman Jesse Garcia defended Zeldin, saying the calls for his resignation are "nothing more than partisan, far left progressive wrangling, to try and hijack a message."

Suffolk Minority Leader Kevin McCaffrey, a Republican from Lindenhurst, said he wasn’t "quite sure what to make" of Zeldin’s decision to continue objecting to the electoral results following the chaos at the Capitol.

McCaffrey blamed Trump for inciting last Wednesday’s violence, and said objecting to the certification is a "weak constitutional argument" because the states are the ones that certify the votes and Congress’ role is "ministerial."

"I guess he believes that was something he should do," McCaffrey said of Zeldin, later adding, "I don't think that was the time or place to do it."

Protesters: Zeldin must resign for voting to overturn election resultsDemonstrators rallied outside the offices of both Long Island GOP House members as calls for President Trump's impeachment continued to mount in Washington D.C.