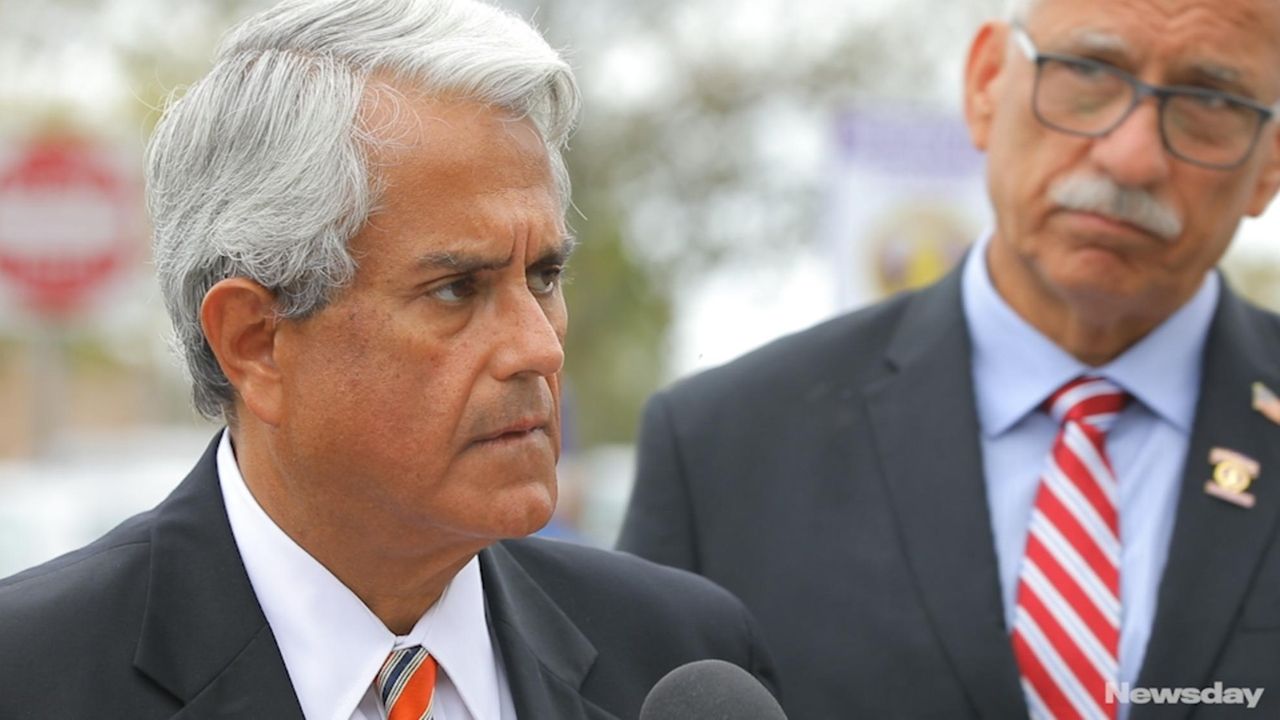 PSEG Long Island called crews home from Florida where they had helped restore power to the millions left in the dark after Hurricane Irma.

In Nassau and Suffolk as well as towns in both counties, officials with still-fresh memories of superstorm Sandy, readied their emergency operations centers, warned residents to take precautions, and took the measure of trees most likely to snap from the force of powerful winds.

The following is a summation of Long Island efforts — at the state, county and local levels — to prepare for possible heavy rain, high winds and flooding from Jose.

The state — Gov. Andrew M. Cuomo’s office Monday said a range of storm-preparation efforts were in full swing. Four high-axle vehicles, six sandbaggers, and nearly 1,000 feet of inflatable aqua dam have been deployed to Long Island by the state’s Division of Homeland Security and Emergency Services. Each high-axle vehicle is equipped with personal flotation devices, hand lights, hand tools, blankets and an inflatable boat. The New York National Guard is on alert and has deployed 100 soldiers and 20 high-axle vehicles to assist with a light debris removal. Soldiers will be stationed at National Guard facilities in Farmingdale and at Gabreski Airport. Additional state troopers, along with four air boats and four zodiac boats will be deployed as needed.

The coastline — Jose, expected to be downgraded to tropical storm status by the time it hits Long Island — was still hundreds of miles out to sea Monday. The morning’s high tide brought related flooding to Fire Island and Atlantic Ocean beaches. State parks crews removed all lifeguard shacks, storage and stations from Jones Beach and placed sand bags around vulnerable buildings at the barrier island beach.

The National Weather Service officials warned of dangerous rip currents and put the area from Fire Island Inlet to Port Jefferson under a tropical storm watch, with the worst conditions expected to hit late Tuesday into Wednesday.

Fire Island Ferries canceled all service Tuesday and told customers to check back regarding Wednesday service.

Utilities — PSEG Long Island has been watching Jose for the past week, said Dan Eichhorn, vice president of customer services, who becomes president and chief operating officer on Oct. 2. “We’re preparing for the worst and hoping for the best,” he said.

PSEG expected its 30 workers back from Florida by Tuesday and about 240 contractors here by Thursday, said John O’Connell, vice president of transmission and distribution.

The company also has secured 85 workers from its sister utility — PSE&G in New Jersey — and another 200 line workers from a utility mutual aid network. PSEG also started stockpiling fuel and supplies when Irma’s track was uncertain, O’Connell said, and those preparations have been supplemented by additional checks and work.

Why this hurricane season is so active

“A lot of this will depend on conditions that happen when the storm actually hits,” Coleman said.

He urged travelers to stay in touch with their carriers for information on specific flights, and give themselves extra time to arrive at their airports.

The state Department of Transportation is deploying 20 large dump trucks, one wood chipper, and one large dewatering pump and will deploy additional equipment and crews from Long Island and three other regions, if needed.

Cuomo’s office said the MTA was monitoring the storm and putting personnel, equipment and supplies in place. Additional personnel will be brought in to staff customer information, LIRR stations as well as track and operations departments.

Nassau and Suffolk counties — Suffolk will open its emergency operations center in Yaphank at 8 a.m. Tuesday and the Department of Public Works has prepared vehicles for use in the event of coastal flooding or to remove downed trees.

“We’re hopeful it tracks away from the coast and amounts to not much more than a marine storm,” County Executive Steve Bellone said in a phone interview.

Municipalities — The National Weather Service said in an update Monday night that Suffolk’s north and south forks would likely bear the brunt of Jose but Nassau communities weren’t acting Monday like they will get off easy. Long Beach officials said they were moving sand to close in some open dune areas along the 2.2-mile boardwalk. Since superstorm Sandy hit in 2012, the city has built up dunes to the west and east of the boardwalk.

Hempstead Town officials made sure generators at their 15 senior centers were operational, removed town boats from the water and reminded residents to do their own preparations.

In Suffolk, Islip Town officials granted all boaters — permitted or not — access to boat ramps.

“Permits will not be checked, and residents are urged to take full advantage of all available ramps in order to maximize safety as we prepare for the hurricane,” the town said in a statement.

Brookhaven Town plans to open its emergency operations center early Tuesday and recommended residents stay off beaches and sign up for emergency alerts.

East Hampton Supervisor Larry Cantwell said the storm could bring erosion to the oceanfront and some street flooding. Trees, still with their summer leaves, could cause damage and lead to power outages, he said.

Town crews were at beaches pulling back lifeguard stands, garbage cans and “things that are prone to be swept out by the surf or blown or become flying objects at those locations,” Cantwell said.

Southampton Supervisor Jay Schneiderman said he was mostly concerned with erosion and flooding.

“Over a period of three days, it may be pushing water in which case it may lead to significant flooding in the Riverhead, Riverside area and other areas that are not in the oceanside but in the bay,” he said.