April — a month that welcomes warblers, daffodils and, yes, its share of showers, as well as temperatures warming up, on average, to the 50s and 60s.

Korbel’s not affirming that, but he does say that “April is the only month that can bring both heavy snow and temperatures in the 90s.”

So, possibly when it comes to weather, his more apt description is: "April is the wackiest month."

By April’s end, we’ll be seeing nearly a 14-hour stretch of daylight from sunrise to sunset. And, despite cooler temps, the sun is “as high in the sky and as strong as in August,” Korbel said, warning, too, of potential for “some nasty sunburns.”

That’s because the month’s also been known to bring heat that would make July proud. How about the sizzling 94 degrees on April 17, 2002? And, you want to talk wacky? Central Park’s hottest day for all of 1976 came on April 18, Korbel said — 96 degrees!

Then again, it was just last year that 5.5 inches of snow meant no-gos for both the Yankees and Mets home openers, with that April 2 system also delivering 4.6 inches to Long Island MacArthur Airport. (We won’t even get into what fell back in 1982, which is detailed below.)

Another thing the month is known for? It’s peak “fire weather” time, meaning that blanket of dead grasses, leaves and twigs on the ground provides plenty of fuel, should a fire get sparked, especially if the air is dry and it’s a windy day, often the case at this time of year. It’s usually not until mid-May that “green-up” of leaves and such occurs, says Tim Morrin, fire weather program lead with the National Weather Service in Upton.

How about this year?

The first few days look to be bringing near or slightly below normal temperatures, with Korbel indicating potential for a warmer turn toward the end of the first week.

Overall, the month should average out a bit warmer than normal, he said, though that’s not to say cooler days couldn’t be in the mix.

The expectation is for monthly rainfall, also, to average out at just around normal. 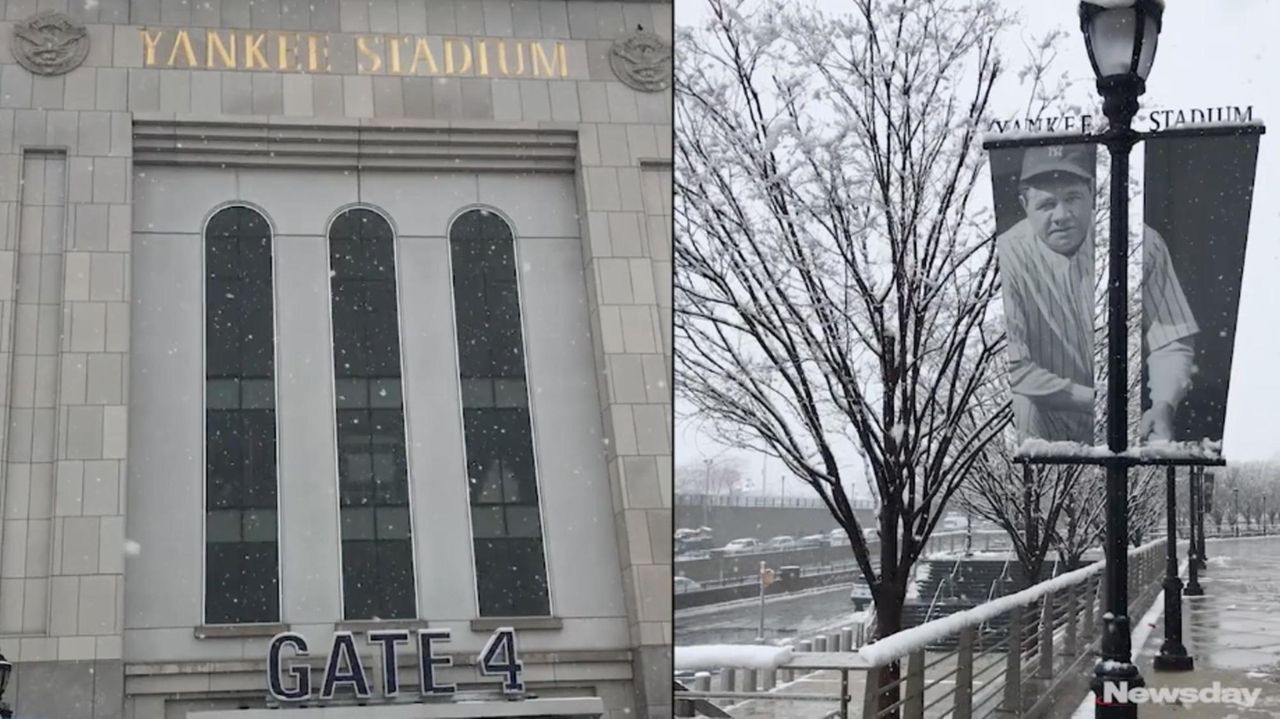 We went back to Geoff Bansen, digital meteorologist for News 12, to take the digital pulse for the month of April. He chose emojis that represent allergies, really nice weather days, mornings that are still chilly, April showers, and surprise sunburns, respectively.

April sees a big jump on average, with the month starting out with normal daily highs of 52 degrees and overnight lows of 36 degrees at the airport. By month's end, that's 63 degree highs, with 45 the low.

1 hour and 13 minutes of daylight

On average, the month sees 4.34 inches of precipitation — that's rain plus melted snow/ice.

That blockbuster year, 1982, brought 16 inches, all on the same day

We scoured our archives — and memories! — and here are some of the most notable weather events and how Newsday covered them at the time.

What they got, Newsday reported, was a storm that had raced cross-country, grew to hundreds of miles in diameter and met up with another system heading up the coast. And, WHAM — it delivered “a one-two punch that staggered Long Island and the rest of the Northeast.”

As temperatures dropped from the upper 30s to the 20s, snow — coming in at 16 inches at the airport — was blown about by gale force winds, with lightning reported in some areas.

News coverage at the time told of a bus that skidded and came to rest on an icy New Jersey railroad crossing. The driver ordered his somewhat resistant passengers off the vehicle and into the snow. Moments later a freight train came along and “sliced through the middle of the bus,” with no injuries reported, according to a story in Newsday.

Still, Long Islanders were their neighborly and resilient selves.

Riverhead police reported rescuing around 100 people from snowbound vehicles, dropping them off at area shelters. “From there, members of four-wheel-drive clubs ferried their neighbors home,” Newsday reported.

With most workers gone for the day, one county official in Hauppauge said, “I’m going to order six reindeer to pick me up and take me home.”

And, a mail carrier in North Babylon, slowly making his rounds, made the most of what was handy. When one of the neighborhood dogs came at him, “I threw a snowball at him.”

What happens when the mercury hits the 90s, well before its time?

Reporters go out in search of sweaty, wilting people who are trying to get relief. And Newsday came across one man who, given his job, should actually have been nice and cool.

Loading bags of ice onto a refrigerated truck in Hicksville, the worker, wiping his brow, said that, “days like today, I like working in the freezer. But it’s 30 degrees in here and I’m still sweating.”

Sure, people had air conditioning, but, wouldn’t you know — a number of the Island’s generators were out of service for seasonal maintenance.

Said then-chairman of the Long Island Power Authority, "I never thought that I'd have the same pressure and tension in the middle of April" as he had during the previous August’s heat wave. "I woke up this morning and it was so hot in my house, I said, 'My God, we're already there and it's only April.' "

Still, there was one blessing, at least for those overseeing the power grid.

The energy crunch wasn’t as bad as it could have been, as so many residents still hadn’t dug out those air conditioners from winter storage.

Setting 24-hour rainfall records in several areas, the system ended up swamping streets, knocking out power, and washing out a bluff on the North Shore.

It led Newsday to provide a primer for homeowners dealing with water in their basements on “how does it get there, and how can they stop it?”

A Smithtown highway official said there was a round-the-clock effort to pump water off roads. Old Nichol's Road in Nesconset was a problem spot, Newsday said, “in part because homeowners with flooded basements in the area have sump pumps that are pouring even more water onto the roadway.”

Still, “the storm took its biggest bite out of the Island's North Shore,” with a mudslide in Setauket and “shoreside washout that threatened to collapse three homes on a bluff in Sound Beach,” Newsday reported.

In a matter of 14 hours, “torrents gouged into the bluff a 40-foot-deep, 250-foot-long gully — stretching from Riverhead Road to the Long Island Sound,” with round-the-clock efforts planned to “keep the homes on that bluff from collapsing," said a Brookhaven highway official. (Those homes stayed in place, as of a few days later.)

Part of one homeowner's yard had been washed into the Sound. He said that, "when it starts raining there's nothing you can do but watch it go."

'After an incredibly snowy winter on Long Island, everyone thought we were out of the woods once we got to April. However, there was still 1 more snowstorm left!'

Mike Lani, of Glenwood Landing, recalls one of those April snowstorms.

"I will never forget the heavy wet snow on April 10th, 1996. After an incredibly snowy winter on Long Island, everyone thought we were out of the woods once we got to April. However, there was still 1 more snowstorm left! I remember being in Grad school at the time at Stony Brook and coming out of class at 9:30 p.m. (it was a Wednesday) and having to clean off my car and drive home during the snowstorm. Some places in Suffolk received over a foot of snow! It brought back memories of the April 6th, 1982 snowstorm on Long Island, when I was 10."

Tell us your May weather story

NOTABLE DAYS AND HOW THEY'VE FARED