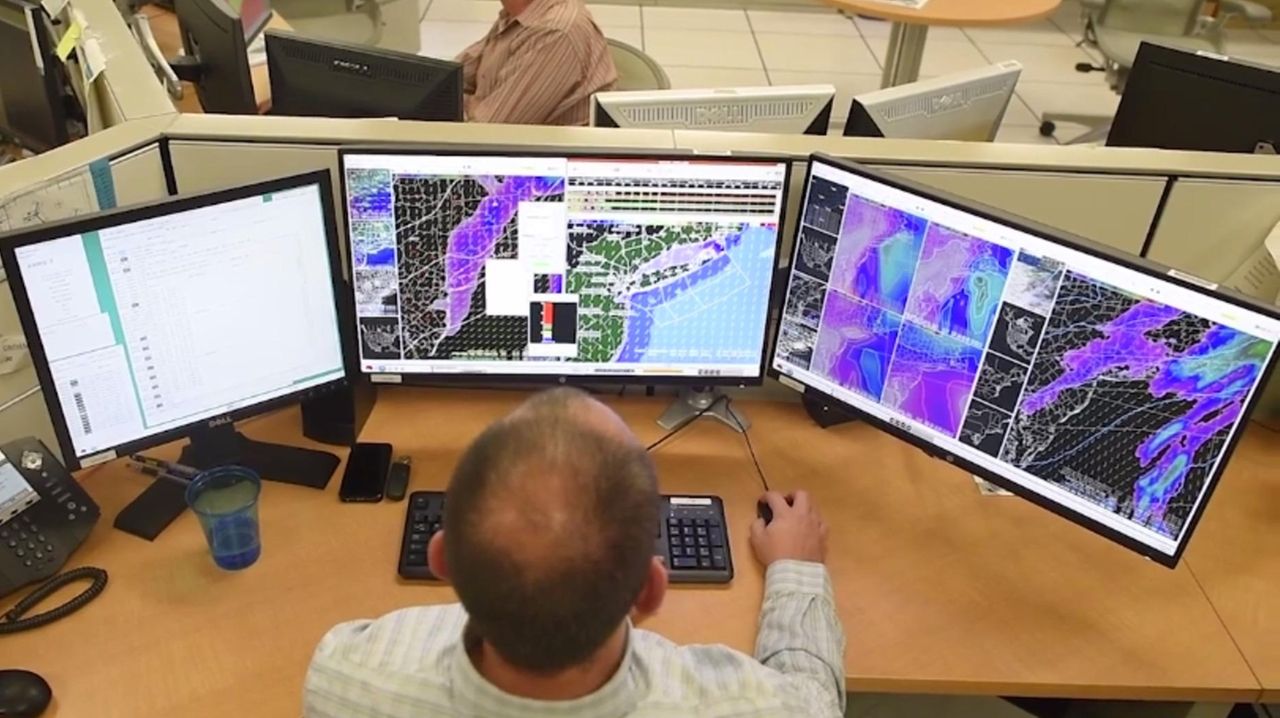 The National Weather Service has made significant improvements to its equipment and the way it tracks and forecasts storms since superstorm Sandy struck in October 2012. Newsday got a inside look at those improvements on Friday, Oct. 13, 2017. Credit: Johnny Milano

With all but one computer forecast model saying the storm would head out to sea, he was resting easy. Then, a few days later, the models reversed, with all agreeing on Sandy’s left hook onto land. And things got busy in a big hurry.

Since then, his interest in weather “has almost turned into an obsession,” he said. Now, when storms are approaching, he’s glued to phone apps, television segments and daily weather reports from the government.

As Raphael and other Sandy-affected Long Islanders have become similarly engrossed in weather calls, the National Oceanic and Atmospheric Administration — with the National Weather Service and National Hurricane Center under its umbrella — has been upping its game as to forecasting tropical systems and communicating their risk.

Among the changes since Sandy:

&#110; An increased spotlight on dangers from storm surge, which brought catastrophic damage to some South Shore communities.

&#110; Plans for the hurricane center to continue issuing watches and warnings for threatening tropical systems, even if they morph into something more akin to a nor’easter or the hybrid that Sandy became.

&#110; Increasing accuracy in predicting storm tracks, with added boosts coming from forecasting-model upgrades and a big jump in supercomputer capacity.

“I was ready for 12 inches of water, but not 42 inches,” says John Poulos, 64, whose Freeport-based marine equipment and supplies business was flooded by Sandy.

That, he said, occurred despite his monitoring hurricane center reports and starting preparations five days ahead of Sandy’s landfall. A pilot, surfer and weather buff, Poulos says he’s developed a new, firsthand appreciation for storm surge.

Since then, the National Weather Service has been beefing up its surge-communication capabilities.

A color-coded map now shows locations expected to be hit by various levels of inundation — that’s the amount of water pushed up over normally dry land by surging seas. And this year, surge watches and warnings, telling of potentially “life-threatening” conditions, were introduced, breaking that information out from other National Weather Service warning products.

Both the inundation map and a special visualization tool for emergency managers are “probably the most important” new features to come along since Sandy, said Edward C. Schneyer, Suffolk County’s director of emergency preparedness.

“The emphasis has shifted,” he said, “from where is the storm and where is it headed to include how will it actually affect me.” For him, the way “threats are explained to the public and emergency services officials” is the main change since Sandy.

“Saying tides will be 5 to 8 feet above normal is not nearly as useful as showing how much water could be on the street in front of my house,” Korbel said.

And that’s what these maps do — “show clearly where the flooding will occur in much greater detail, almost down to street level,” which “is a huge improvement,” he said.

No longer a hurricane

If a Sandy-like storm, one transitioning to a dangerous hybrid system, were on today’s radar screen, the National Hurricane Center would continue issuing hurricane/tropical storm watches and warnings, as it did this year with Jose, which changed characteristics but still posed a threat.

That was not the case five years ago with Sandy, as the weather service passed the communication baton for nontropical warnings to its local forecast offices, including the one in Upton, which makes weather calls for Long Island and neighboring areas.

The shift in messaging led to some confusion, NOAA said in a post-Sandy self-assessment report.

Meteorologists in Upton signaled Sandy’s potential for “life threatening coastal flooding,” 6- to 11-foot surge for flood prone areas and “significant threat to life and property.” But this could have been lost on some, as the information was included under the nontropical headings of coastal flood and high-wind warnings, said David Stark, weather service meteorologist in Upton.

A big lesson from Sandy, said Korbel, is that, “What a storm is called is not important. What it is doing is what counts.”

With an increasingly captive audience for storm particulars, the hurricane center touts a steady improvement in forecast precision.

Forecasters back in 2012 were off, on average for the season, by 95 nautical miles to the left or right of their predicted tracks, when looking ahead two days. That’s been reduced this season to 78 nautical miles either way, according to hurricane center calculations. (As for Sandy, its two-day call was close to spot on, with forecasters off by 41.6 nautical miles in either direction.)

The increasing accuracy is thanks, in part, to advances and upgrades in computer models. That, and a capacity boost to supercomputers that run those models, thanks in part to an added $25 million in post-Sandy funding, meaning speedier processing and better model resolution, NOAA said.

Raphael, the park biologist now fixated with forecasts, says that as he’s monitoring storms, he’s “nervous up to two days out,” appreciating that models tend to become increasingly accurate as a weather event nears.

Holding a degree in atmospheric science, he says he thinks too much of a focus is placed on “misses” and not enough on “the nature of forecast uncertainty.”

“I think we take for granted,” he says, “how good forecasts have become.”