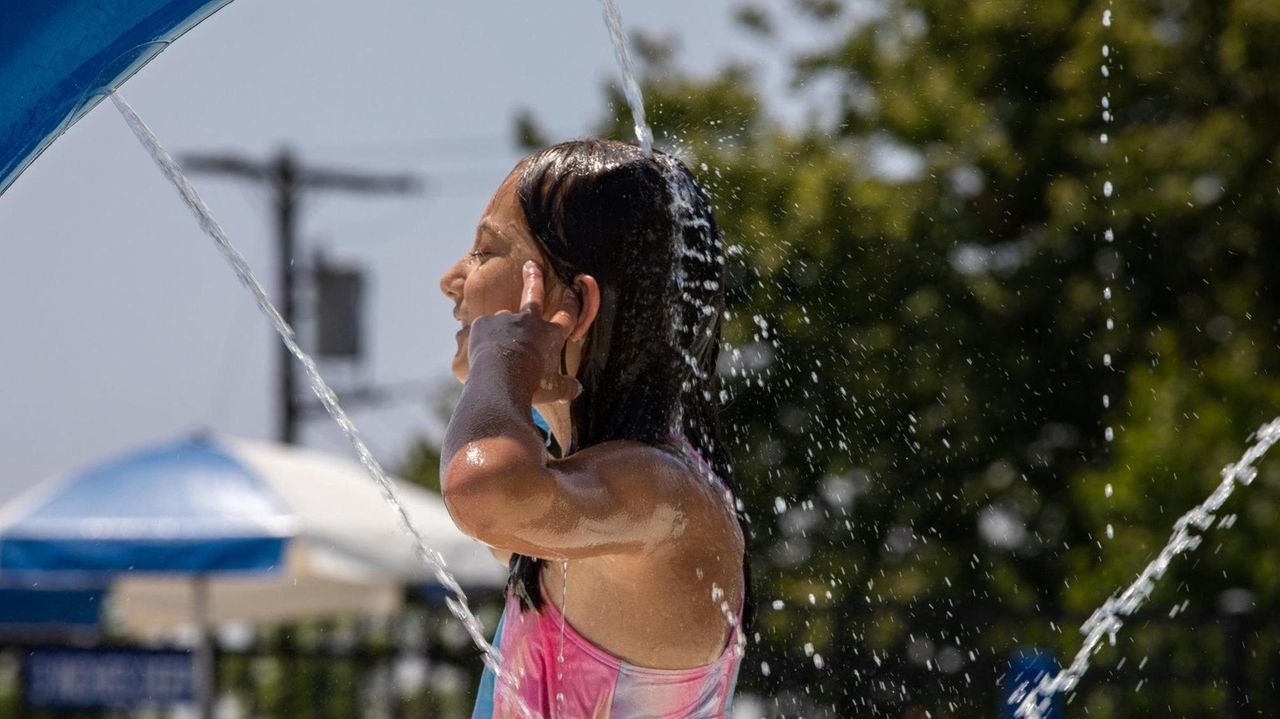 Kids and parents hit the water park to cool off on a hot Friday at Shipwreck Cove at Bay Shore marina. The town extended beach and pool hours Friday through Sunday. Credit: Newsday / Morgan Campbell

This story was reported by Robert Brodsky, Matthew Chayes, Obiageli Chukwuma, Joan Gralla and Mark Harrington. It was written by Brodsky

Most days, Brandon Hislop of Bellmore runs three to four miles outside to keep in shape for baseball season.

But this weekend — forecast as the hottest days yet this summer — will be different.

“I’ll probably work out in a gym,” said Hislop, 16, a junior at Mepham High School, as sweat dripped from his face during a break from his four-mile run. “It’s supposed to be even hotter.”

Across Long Island, people are preparing for a scorcher this weekend and will be flocking to area pools, beaches, cooling centers, malls and movie theaters, seeking any way to beat the heat.

Others don't plan to go far.

Since retiring a decade ago, Lois Wicker's favorite activity is sitting in a shaded gazebo at the Wantagh Park marina, catching “heavenly” breezes off the water while playing Rummikub, a tile game, with her friend Ray Heim, 82, of Levittown.

“We both like to spend time outside,” said Wicker, 78, of Oakdale. On Saturday, though, she'll “try and stay in a cool place” — home.

The extreme heat prompted Nassau, Suffolk and Long Island towns and villages to open cooling centers across the region where residents can chill out in the air conditioning. Many other municipalities have extended their pool and beach hours in anticipation of large crowds of children and families.

But George Gorman, regional director of New York State Parks, said he does not necessarily expect "overwhelming" crowds at Long Island beaches just because of the heat.

Suffolk County Executive Steve Bellone urged residents to use common sense when outside in the heat but acknowledged that extreme weather can often lead to extreme behavior.

Medical officials warn that the combination of heat and humidity can quickly go from uncomfortable to dangerous — especially for children, seniors and those with chronic medical conditions.

Fred Davis, associate chair of the emergency department at Long Island Jewish Medical Center, said doctors and nurses are anticipating an uptick in heat-related illnesses, including dehydration, dizziness, exhaustion and anxiety. Most at risk, he said, are young kids, the elderly and individuals on psychiatric medication who are at greater risk of dehydration.

"Be mindful of the heat and head out in the early mornings and end of the day and avoid the midday," said Davis, who advised residents to also check in on their elderly relatives and neighbors, particularly those living in housing where they don't have control of their heating and air conditioning systems.

PSEG Long Island said it has hundreds of extra workers on call, including on-island contractors and some 200 federal contractors, at the ready in the event of a heat-related outages.

“We’re focusing on the East End of the island,” said PSEG spokeswoman Elizabeth Flagler, adding that the utility will ramp up staff for the peak power period from 1 to 8 p.m. daily. “We know it’s vacation time. We’re keeping a close eye” on demand as the weather heats up.

The utility also has temporary generators in Montauk to help with increased electric load, Flagler said. PSEG had planned to build a new substation this year to fortify the grid, but delays related to examining various locations delayed it.

Overall, Flagler said, the utility has “plenty of capacity” islandwide to handle increased usage tied to the heat.

Statewide capacity should also be sufficient to meet increased demand, according to the New York Independent System Operator, which manages the state grid.

Wes Yeomans, the agency’s vice president of operations, said NYISO was working with local transmission operators to suspend planned maintenance work through the weekend and was in “regular contact with generation owners to ensure we meet the reliability needs of the grid.”

In New York City, Mayor Bill de Blasio declared a state of emergency Friday and signed an executive order mandating that office buildings 100 feet or taller keep thermostats to 78 degrees or higher to reduce power consumption — the first time in city history, he said, such an order has been issued.

“Our fear is people dying,” de Blasio said at a news conference in which he also announced the cancellation of some events in the city due to the extreme heat.

Suggestions for beating the heat:

* The elderly and children under 5 years of age, especially babies, are particularly sensitive to heat's effects. Be sure to offer plenty of liquids to drink, keep them in the shade, and take care not to overdress them.

* Take advantage of air-conditioned facilities such as indoor shopping malls, public libraries, movie theaters, municipal buildings, or senior citizen centers. If you must go outside, try to limit these excursions to early morning or later in the evening when temperatures are lower.

* When you are outdoors, stay out of direct sun when possible. There can be a 10- to 15-degree difference in the temperature when you are in the shade.

* While electric fans do not cool, a fan in each room will help to circulate air and lower temperatures. If you don’t have air conditioning, create cross-ventilation by opening windows on two sides of the building, keep curtains, shades or blinds drawn during the hottest part of the day and open windows at night.

* If possible, take a cool bath or shower. Cool water will help you to dissipate body heat.

* Try to drink eight to 10 8-ounce cups of liquid daily. Carry water or juice with you and sip continuously even if you do not feel thirsty. Snack on vegetables and fruit since they have a high water content.

* Stay away from caffeinated beverages and alcohol, which can dehydrate the body. Alcohol may also dull your perception of the actual temperature.

* Don’t take salt tablets unless you check with your doctor first. You get enough salt from your food or drinking a sports drink.

* Pets can be affected by the heat. Keep their water dish full, and keep them indoors or in the shade during peak hours. Never leave an animal in a locked car, even for a few minutes.

Cancellations, postponements this weekend because of the heat:

The two-day OZY Fest in Central Park has been canceled.

A spokeswoman for New York City Mayor Bill de Blasio says a Times Square commemoration of the 1969 moon landing has been canceled.

The New York City Triathlon, which was scheduled for Sunday, has been canceled.

The Tough Mudder Long Island event weekend, Saturday and Sunday, has been canceled. For more information and options on refunds or transfers, go to toughmudder.com.

Huntington pool hours extended for expected heatIn anticipation of the weekend's heat wave, the Huntington town spray park in Elwood and the Dix Hills Park pool will have extended hours and the town will open cooling centers. Forecast: Dangerous heat this weekendA heat advisory that began at noon Friday lasts until 6 a.m. Saturday, when an excessive heat warning starts and runs until Sunday night, forecasters said.