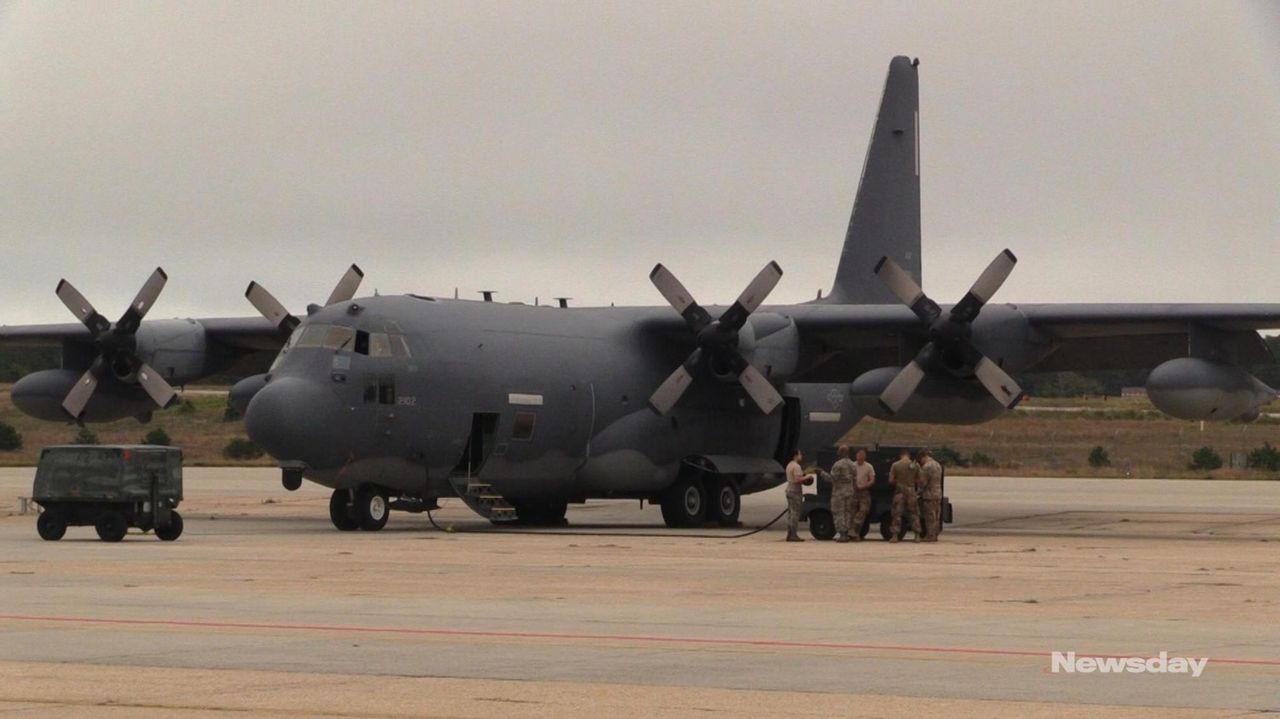 New York State is dispatching National Guard personnel and aircraft to Florida and Mississippi to assist with the response to the major storm. On Wednesday, U.S. Air Force Capt. Michael O'Hagan talked about what he and his team might face in the hurricane's aftermath. Credit: James Carbone

Michael, which made landfall Wednesday on the Florida panhandle as a category 4 hurricane, may not be coming to Long Island. But some of its moisture, being drawn north, will contribute to heavy rainfall which could lead to flooding Thursday, forecasters say.

A flash flood watch has been issued for the region for Thursday afternoon and overnight.

As of the Wednesday evening forecast, Long Island was expected to be in the area seeing the heaviest rain, amounting overall to 1½ to 2 inches, with eastern parts of the Island and those along the South Shore bearing the brunt.

Some localized spots could see even more, the National Weather Service said.

Any heavy rain that arrives within a 1 to 3 hour window could lead to flash flooding, the watch said.

The potential for heavy rain is coming about as an arriving cold front will be interacting with the warm, moist air streaming up from the south.

“There will be a lot of tropical moisture over Long Island…and that means some torrential downpours are certainly possible,” said Bill Korbel, News 12 Long Island meteorologist.

Scattered thunderstorms could also develop from afternoon into the evening, with some whipping up strong to damaging winds.

Minor coastal flooding is expected with the Thursday morning to early afternoon high tide cycle, particularly for the most vulnerable spots along the South Shore bays of Nassau County.

No significant shoreline impacts were expected as of Wednesday.

Michael made landfall Wednesday afternoon on the Florida Panhandle, lashing the coast with tropical storm-force winds and rain and pushing a storm surge that could cause catastrophic damage well inland. It's the most powerful hurricane in recorded history for that stretch of the Florida coast.

Gov. Andrew M. Cuomo said 75 airmen with the Westhampton Beach-based 106th Rescue Wing are leaving for Gulfport, Mississippi, on Thursday, along with a search-and-rescue airplane and helicopter and two inflatable rescue boats.

The New York Army National Guard is also preparing to dispatch two Chinook helicopters to Tallahassee, Florida, along with up to 20 Guard members.

As "New York understands the devastation that extreme weather can cause," Cuomo said the state stands "ready, willing and able" to assist southern states as the region responds to and recovers from the storm.

The storm will be moving over the Carolinas Thursday and set to emerge over the Mid-Atlantic by early morning Friday.

“Michael will pass well south and east of us,” Korbel said. “But it will still be rather windy Friday, and the gusty north winds will also bring us some very chilly weather for the weekend.”