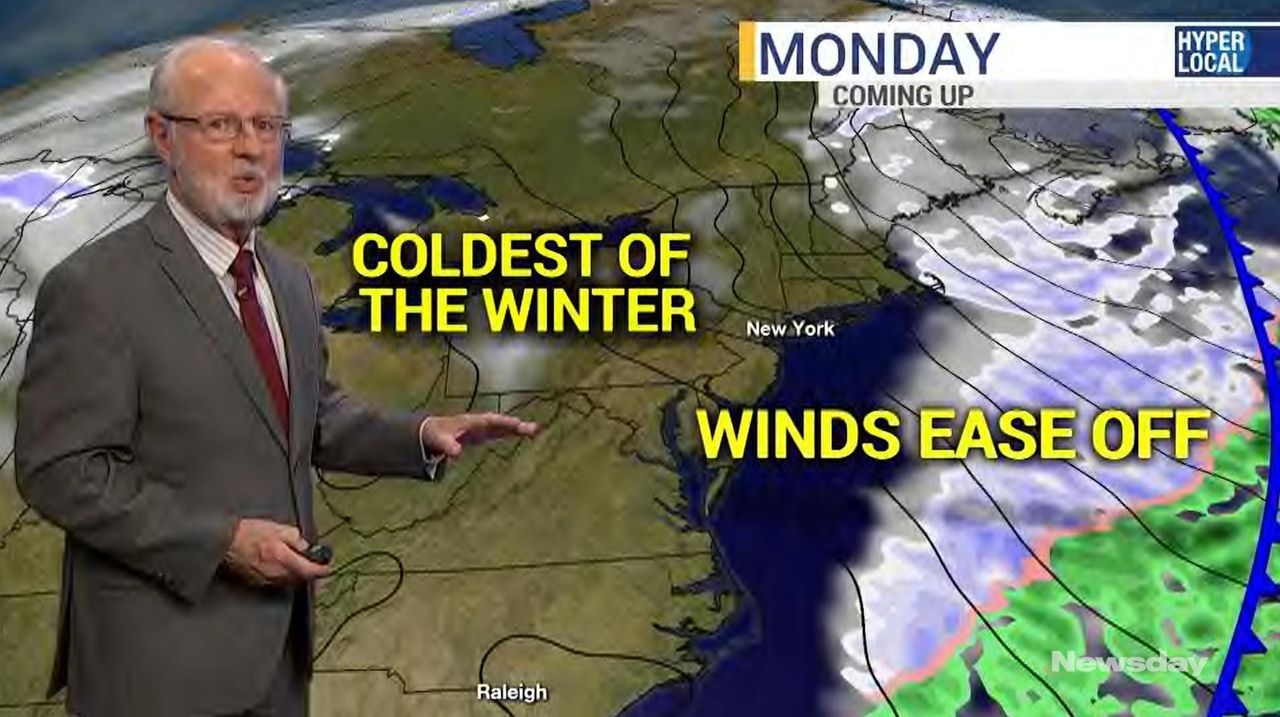 Long Islanders will awake Monday to the coldest air of the season, with temperatures in the single digits — the wind chill will make it feel like 10 below — and blustery wind gusts of up to 50 miles per hour, according to National Weather Service meteorologist Jay Engel.

And while the region was spared any significant snow, the weekend storm dropped 1.61 inches of rain and two-tenths of an inch of snow in Upton, weather service officials said. Parts of Long Island, particularly in low-lying coastal communities, including Freeport, Island Park, Lindenhurst and Wading River, had experienced minor flooding Sunday, county and town officials said.

Any remaining standing water was expected to freeze overnight Sunday and turn into ice, causing problems for motorists and pedestrians, Engel said. "We didn't get the snow but we are being punished for it with brutal cold," he said.

A weather service advisory warned that anyone driving or walking Monday should be prepared for slippery roads and walkways and are urged to use extra caution.

Nassau's Deputy County Executive for Public Works Brian Schneider said the county dropped 2,200 tons of salt on paved surfaces Friday morning through Saturday night and he anticipated putting down as much as another 2,400 tons on Sunday. "We are confident that today's salt treatment will address Monday morning's commute," he said.

The Long Island Rail Road applied a deicing agent to the third rails across its system Sunday to prevent ice from accumulating on them. Railroad spokesman Aaron Donovan said they did not expect the LIRR, which will operate a regular schedule Monday for the Martin Luther King Jr. Day holiday, to experience any major delays. "But we are on the lookout for surfaces that are freezing over," Donovan said.

Icy runways caused delays at JFK Airport Sunday evening of more than an hour for inbound flights and departure delays of about 25 minutes, according to the flight tracking website flightaware.com.

Cold-weather tips for you, your pet and home

Long Islanders may not see much easing of the bitter cold until Tuesday, which is expected to be sunny, with less wind and a high near 28 degrees. Rain may return again on Wednesday, with a 40 percent chance of freezing rain and sleet in the morning and a high near 43 degrees.

There’s a 30 percent chance it will rain again Wednesday night and into Thursday, when temperatures may reach 46 degrees. Snow may return Thursday night, forecasters said.

With Jesse Coburn and Scott Eidler

STAYING WARM IN THE COLD:

The Suffolk County Department of Social Services will work with residents in need of shelter when the temperature is at or below 32 degrees, including wind chill, according to its website.

Residents can call the department’s Social Services Emergency Services Unit at (631) 854-9100 on weekends and holidays. Warming centers are operated by the county’s individual towns.

Cats and dogs regulate body heat differently than humans do, according the Suffolk County Society for the Prevention of Cruelty to Animals, so pet owners should take certain precautions to keep them safe.