An autumn nor'easter expected to deliver as much as seven inches of rain for western Long Island, along with high winds for the region, will hit the hardest Tuesday and last through Wednesday, forecasters said.

The coastal storm's dangerous combination of "an excessive rainfall event" and strong winds — the highest gusts likely affecting the East End — could bring down trees and power lines, the National Weather Service cautioned.

Gov. Kathy Hochul declared a state of emergency Monday night, saying she was doing it proactively to "ensure we can provide the necessary resources to respond to this storm and protect lives and property in regions where the forecast is calling for significant rainfall."

Flooding is the main concern for western Long Island, as well as New York City, as the most intense rainfall is likely in that area, the weather service said.

The remnants of Hurricane Ida last month drenched a similar area, killing 13 people in New York City and forcing dozens of drivers on Long Island to abandon their cars on flooded roadways.

Forecasters were still hedging about exactly where the heaviest rain would fall.

"The exact location and movement of a slow moving band of heavy rain with embedded thunderstorms late tonight into Tuesday afternoon will determine whether and where a swath of 5 to 7 inches of rainfall falls," the weather service said in a Monday night briefing.

There is a flash flood watch for the region from 8 p.m. Monday to 5 p.m. Tuesday. The heaviest rain is expected between 4 a.m. to 4 p.m. Tuesday.

Minor to moderate coastal flooding is expected at high tides in low-lying communities, as well as beach erosion, the weather service said.

The weather service issued a wind advisory for eastern Suffolk County from 2 p.m. Tuesday until 6 a.m. Wednesday. Most of the Island and New York City are forecast to get sustained winds of 25 mph to 35 mph with gusts of 40 mph to 60 mph, with the East End predicted to get the highest winds.

Preparing for the storm, Suffolk police will deploy a Humvee in each precinct while public works staff will be coming in early Tuesday "and will work as long as necessary to clear county roads," county spokesman Derek Poppe said in an email.

MTA acting chairman and chief executive officer Janno Lieber said all its agencies, including the Long Island Rail Road, are "prepared for whatever comes." But, Lieber said, he does not anticipate the kind of impact that was delivered by Ida's remnants, which inundated subway stations, and some LIRR stations, with floodwater — disrupting service for days. 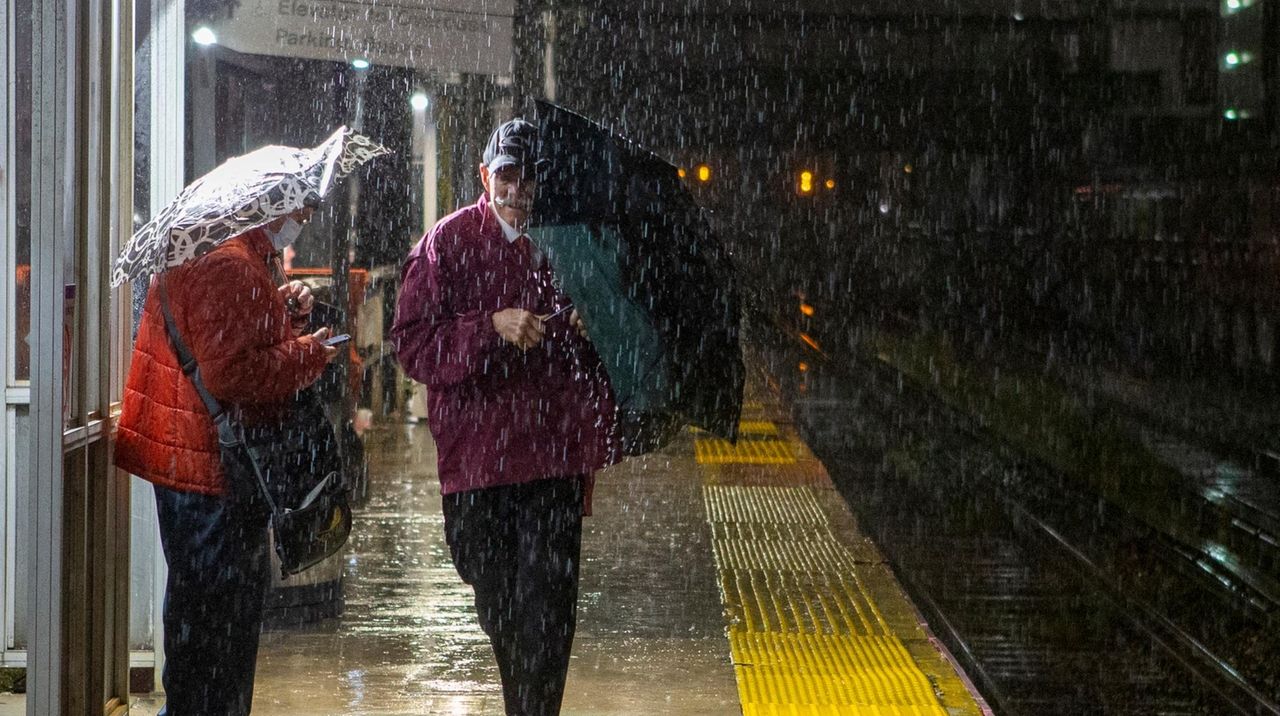 "At no point do we expect to see the type of intense rainfall over a very short term that we had during Hurricane Ida," Lieber said during a Monday evening news conference outside the Metropolitan Transportation Authority’s Manhattan headquarters.

"We have a detailed plan in place to protect the network and to deliver safe service throughout the MTA system during the storm."

Key to that plan, Lieber said, is the deployment of personnel to "places that we know are vulnerable to flash flooding," so that they can respond to emergencies quickly.

To address potential flooding at subway stations, which were particularly hard hit by Ida, Lieber said 900 pumps will be available at 300 stations. Still, Lieber suggested some amount of water working its way down to the subterranean transit system is to be expected when New York City’s sewers "sometimes have their capacity overwhelmed."

"We can get the water out of the system. Do not me alarmed if you see a little water on the platform, if you see water on stairs," Lieber said. "The system is designed to deal with it. And we will be ready."

A gale watch is set for most of the region's waters from 8 a.m. Tuesday through Wednesday at 2 p.m.; that warning runs until 8 a.m. Wednesday for New York Harbor and western Long Island Sound, the National Weather Service said.

New York City issued a travel advisory running from Monday evening through Tuesday afternoon. Leading the list of the city's safety tips was a warning for anyone living in a basement: "be prepared to move to a higher floor during periods of heavy rain."

After Monday's mild temperatures, daytime highs will fall to the low 60s for the remainder of the week, with nighttime lows in the 50s.

The sun should return Thursday, but another storm could arrive Friday and possibly last through Saturday. However, Sunday, Halloween, should be sunny, the weather service forecast.

With Alfonso A. Castillo and Robert Brodsky

Live radar, latest forecastSee how the weather's looking for your area for the days ahead.