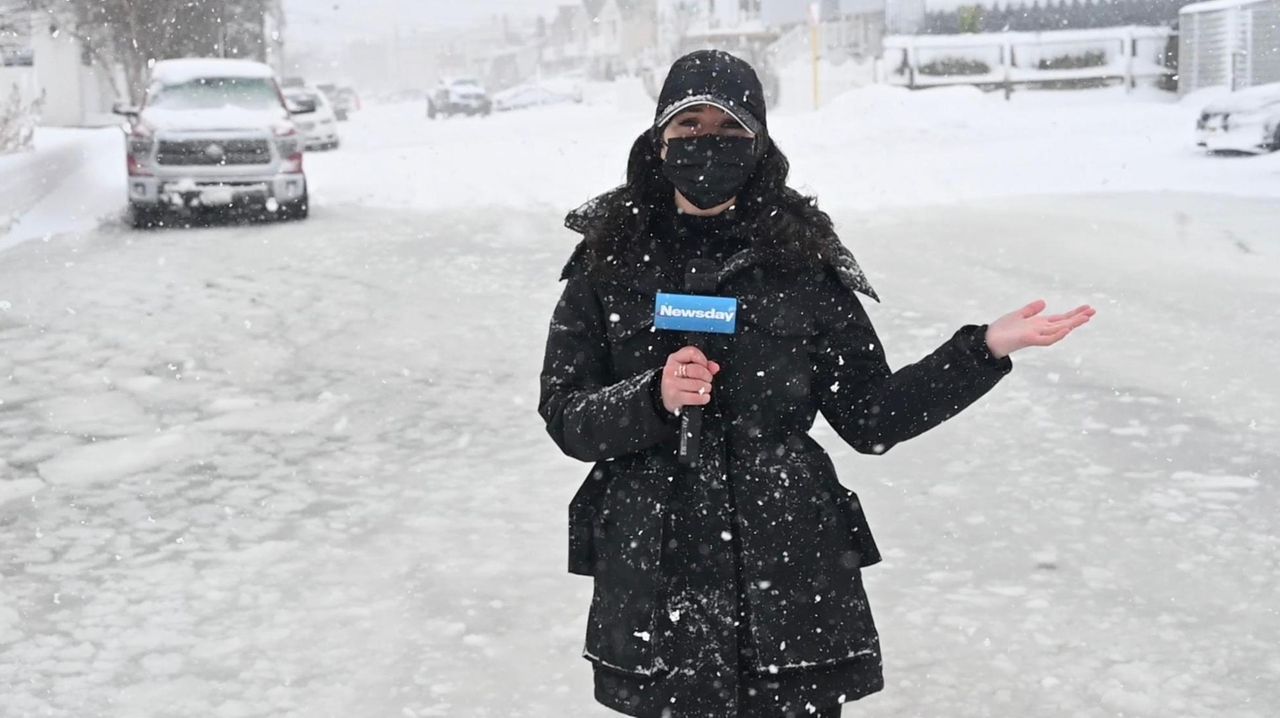 Long Island on Monday was hit by one of the largest snow storms the area has seen in almost 3 years. Newsday's Chelsea Irizarry has a look on how residents are recovering and how elected officials are prepared if there are more. Credit: Newsday staff; Facebook / Governor Andrew Cuomo

Blowing snow and pesky, icy rain, courtesy of the nor'easter-that-wouldn't leave, could have Long Islanders sensing a bit of instant deja-vu Tuesday as they peer out to see remnants of a menacing Monday.

New snow from the storm will amount to an inch or less Tuesday but the mix of rain changing to ice overnight from a system Gov. Andrew M. Cuomo described Monday as "a dangerous, life threatening situation," will make driving treacherous for a second straight day.

For those choosing to venture into the cold, ease of the journey will depend on the form of transportation. The Long Island Rail Road was set to resume service at 4 a.m. Tuesday on a weekend schedule after it was suspended Monday because of heavy snow and tree limbs on tracks. Before the storm finally moves south and east of Long Island later Tuesday, the region could see up to 20 inches of snow, according to the National Weather Service.

On Long Island, Bellerose recorded the most snow in Nassau Monday, with 16.6 inches, and in Suffolk, Smithtown had the most, with 14.6 inches, according to totals released by the weather service. 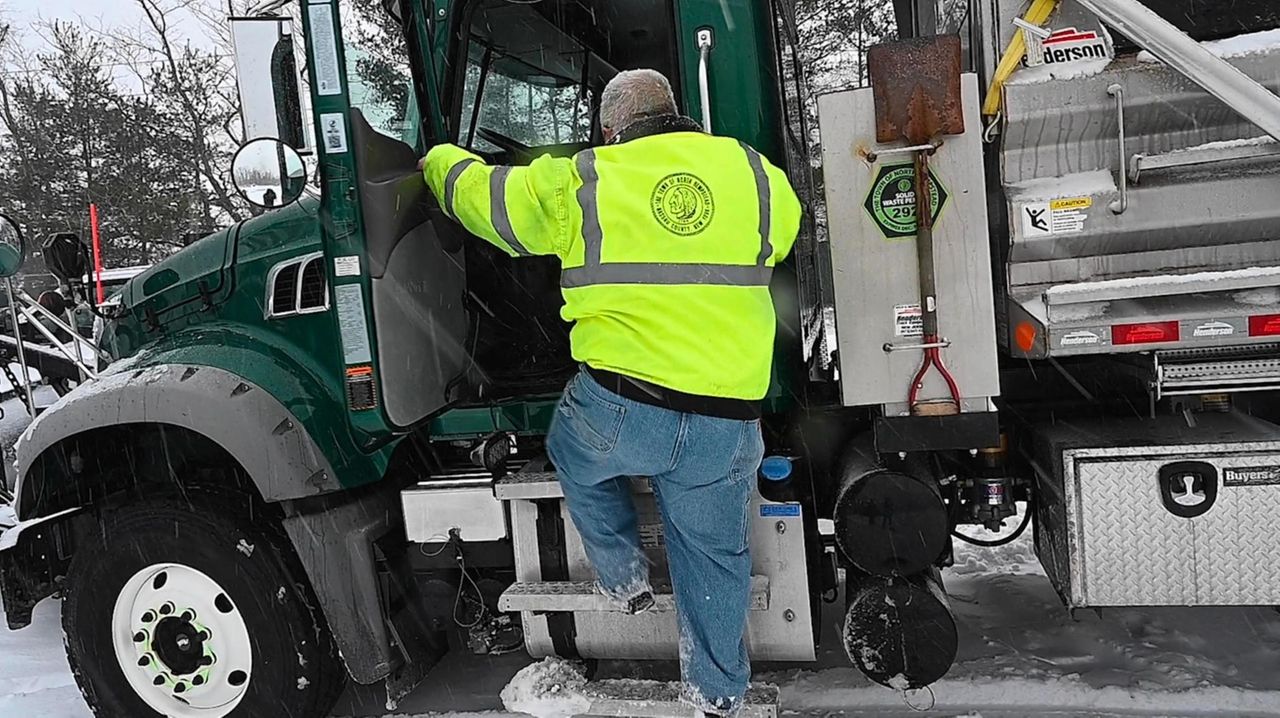 Pat Dolan in N. Hempstead with plow crews Up to a foot and a half of snow is expected in Nassau, as Newsday's Pat Dolan speaks with North Hempstead's maintenance supervisor Brian Watterson about what to expect. Credit: Newsday / J. Conrad Williams

The stubborn storm, which dumped about 2 to 3 inches per hour over most of the region, remained parked over the Atlantic off the coast of New Jersey, swirling in place, Joe Pollina, a meteorologist with the National Weather Service said late Monday.

"This is the most snowfall we’ve seen in one storm in probably a few years," Pollina said.

After a breezy mostly soggy overnight, an icy rain will turn back to snow showers for most of Long Island after 10 a.m. with a high of about 32 degrees and wind gusts of nearly 40 mph, making it feel more like in the low to mid 20s, the weather service said. There's a 50% chance of light snow Tuesday night with gusts as high as 26 mph and a low of 29. A coastal flood warning for parts of Nassau and Suffolk is in effect until 5 a.m.

Power outages, which affected 4,200 customers Monday afternoon, were down to about 120 by 4 a.m. Tuesday. PSEG said it had restored more than 11,600 outages Monday.

Strong winds across Long Island had severe effects on PSEG's electric system in Suffolk, where most of the outages Monday were centered.

"What we were watching was Nassau got the higher snow totals, but peak wind gusts were expected to be higher in Suffolk," said PSEG spokeswoman Ashley Chauvin. Many of the earlier outages were in East Hampton, Southampton and Southold. By Tuesday morning, the bulk of the outages remained in Suffolk, but closer to the Nassau border, according to the utility's website.

Some 1,300 power-line workers and tree trimmers worked on restoring power throughout Monday, Chauvin said, though high winds did limit their ability to go up in bucket trucks.

At least 113 scheduled flights at JFK Airport Tuesday have been canceled, according to an overnight tweet on its official Twitter page. LaGuardia Airport also tweeted overnight but only said that flight cancellations and delays are anticipated Tuesday. MacArthur Airport advised travelers to check with their airlines for updated information on possible cancellations. The three airports were closed Monday.

Some Long Island schools are expected to return to remote learning Tuesday after schools were closed Monday for in-person instruction. Find a full list of school closings here. 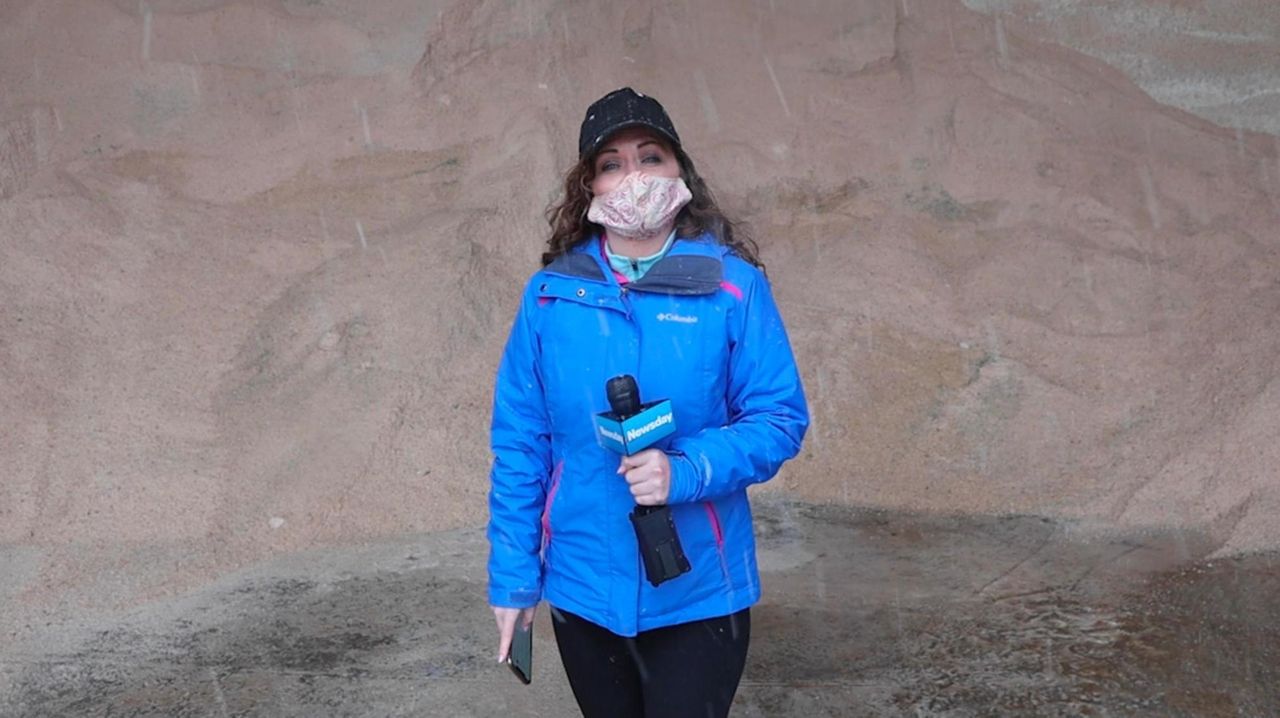 Cecilia Dowd in Commack hears from Bellone on road conditions in Suffolk Suffolk County Executive Steve Bellone said Monday that Suffolk County is prepared for the nor'easter, but needs residents to stay off the roads. Newsday reporter Cecilia Dowd has more on this story. Credit: Howard Schnapp

Lorna Lewis, superintendent of Malverne schools and a longtime regional and state educational leader, said districts closing due to inclement weather typically make up for lost instruction later by drawing on "snow days" built into their calendars.

Public school buildings will be closed again Tuesday in New York City, though virtual schooling continues, Mayor Bill de Blasio said. A 24-hour state of emergency he declared Monday that prohibited traffic, except for essential workers, on all roadways, is set to end at 6 a.m. Aboveground subway service — closed Monday, is scheduled to resume at 5 a.m. Tuesday, Cuomo said.

The inclement weather sidelined one Long Island groundhog from the public Tuesday, while a second critter will continue his annual tradition of predicting winter’s duration. 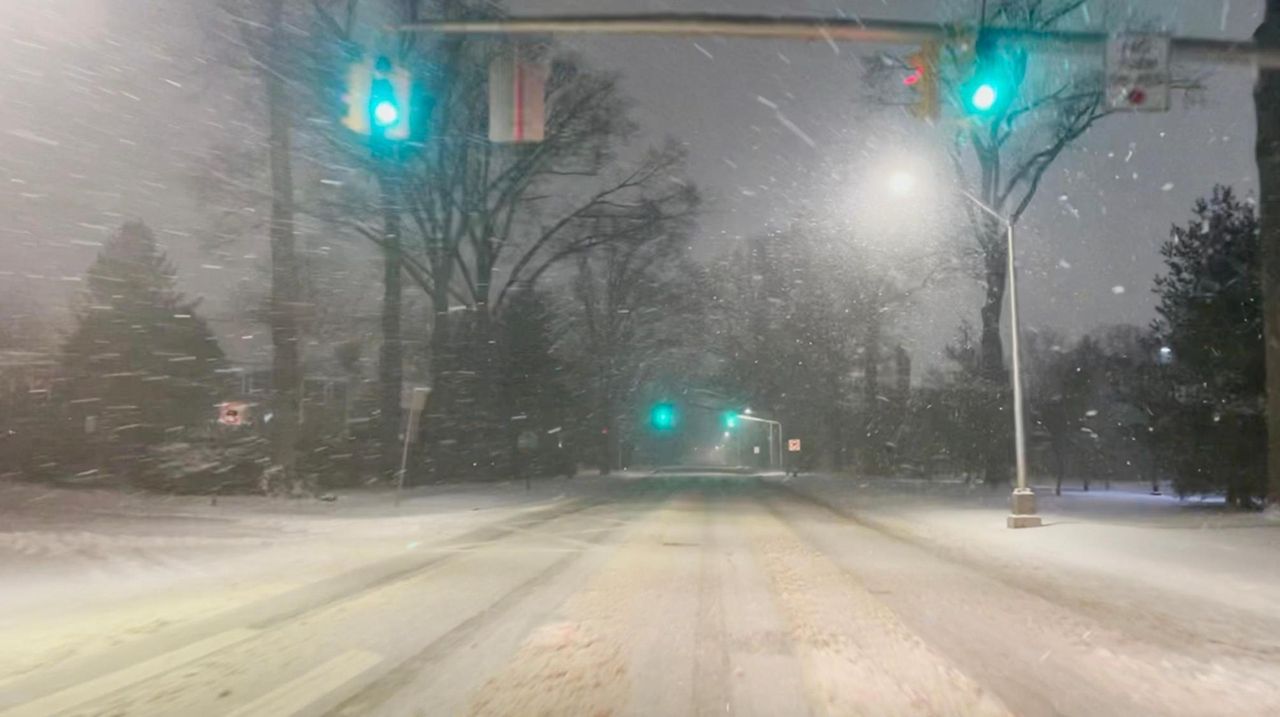 Malverne Mel will be ready to deliver his meteorical prognostication for the next six weeks at 8 a.m. Tuesday on Church Street in Malverne, said village Mayor Keith Corbett.

Corbett said the event, which is not open to the public, can be viewed on Malverne TV, the village's public access channel.

"His accuracy, believe it or not, is 78.7%," Corbett said of Mel’s forecasting. "It’s a great event and we believe he is better than Punxsutawney Phil."

For Holtsville Hal, the hamlet's weather-predicting ground hog, the news was not so good. He'll be shielded from the public on his big day. The toothy rodent's forecast of a late winter or early spring won’t be seen by the public, according to an announcement on Brookhaven Town’s website.

The storm dumped about 2 to 3 inches per hour over most of Long Island on Monday, with the band moving to the northwest, taxing snowplow drivers' efforts to clear roads and expressways even with many heeding advice to stay home.

In Port Washington, it was "all hands on deck," according to Brian Waterson, maintenance supervisor at the Town of North Hempstead's Department of Public Works.

"We are worried about fatigue," Waterson said of his crew. "Drivers are going to be behind the wheel for long periods of time."

In Oyster Bay, a man swerving in and out of traffic lanes on Route 106 in a Dodge Ram with a plow attached, was pulled over by Nassau police officers after he narrowly missed hitting another vehicle. The driver, Deyvi Castillo-Chavarria, 30, of Oyster Bay, was charged with driving while intoxicated and other vehicle and traffic offenses, police said.

LIRR, airports shut down service because of snowstorm

Between 7 a.m. and 9 p.m. Monday, Nassau police received 132 calls reporting automobile crashes, a spokesman said. As of 4 p.m., Suffolk police had received 96 reports of crashes, none resulting in serious injuries, according to a department spokesman.

But while downtown Northport was largely closed Monday, two businesses were open: Golden China and Gunther’s, the longtime downtown watering hole that was rebuilt after a fire four years ago

Monday afternoon forecast: Storm continues, could bring over a foot of snow Moving into Monday afternoon, meteorologist Bill Korbel has a look at the weather forecast. The snow could reach upwards of a foot and a half over northern and western Nassau County, Korbel says, with less on the East End and South Shore. Credit: Newsday

"It’s blizzard conditions," she said. "The wind hits you so hard."

In Babylon Town, 110 plows cleared roads midday, after having been on duty since 9 p.m. last night, town spokesman Dan Schaefer said. All roads in the town had at least one pass, but the rate of snow accumulation has been difficult to keep up with, he said.

The town expects the storm cleanup to run into Friday, according to a Facebook post by town Supervisor Rich Schaffer. 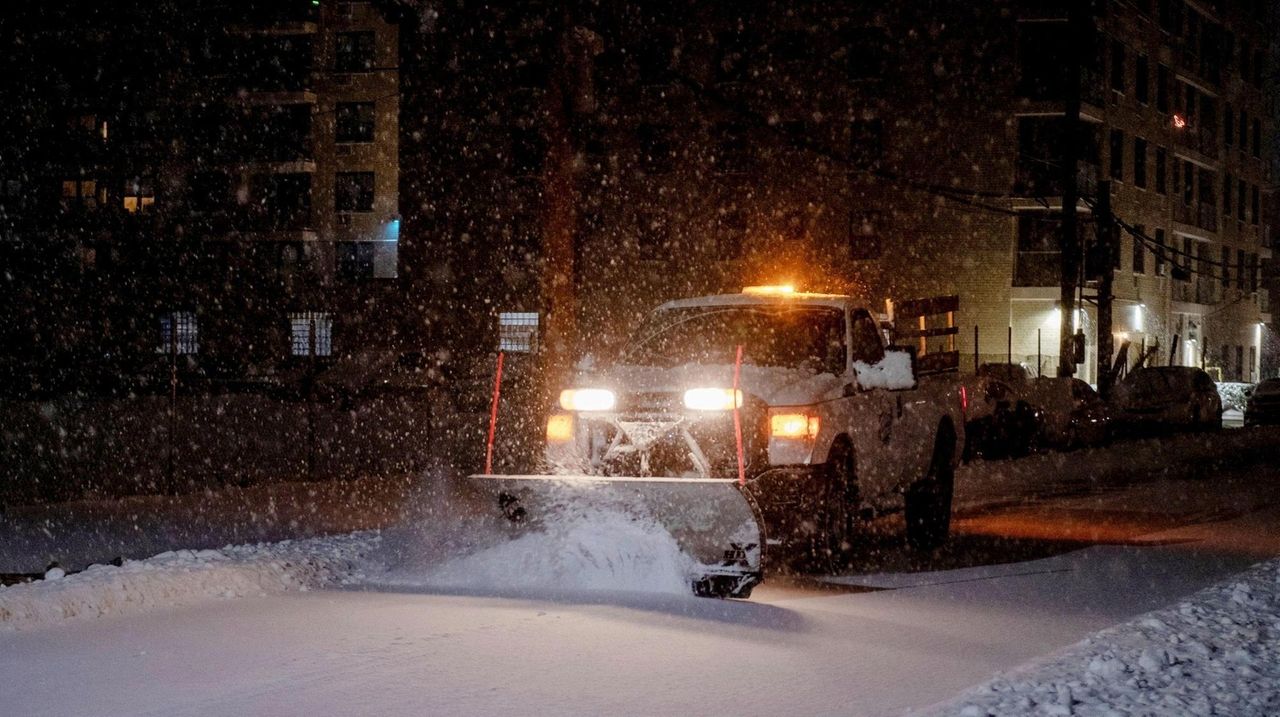 Pat Dolan on how you can help the snow plows North Hempstead officials on Monday tackled a heavy snowfall and winds, warning residents not to shovel into or park on streets, and allow road crews to safely plow. Despite the dangerous weather, some have found joy in the cold. Credit: Newsday / J. Conrad Williams Jr.

In Islip Town, Supervisor Angie Carpenter said the town, including Fire Island had been spared any major flooding.

"We've been very lucky so far," she said.

George Gorman, Long Island’s regional director of the state park system, said there was moderate erosion at several local beaches Monday — at Robert Moses, field 5; at much of Gilgo, particularly on the west — as well as flooding at Jones Beach and in the Montauk area.

Some schools delaying starts, going remote this morningSome schools will be delayed or operate remotely on Wednesday because of the snow. Explore our list of closures and delays to see which places of learning and programs are affected. See how much snow has fallen in your areaCheck out our interactive snow map to see snow totals from across LI. Forecast: Live radar and latest details for your areaCheck the hour-by-hour forecast and see future conditions. Tips for weathering winter weatherWear layers, stop shoveling if you are having trouble breathing or experiencing chest pains and if you absolutely can't avoid driving, leave plenty of room between your vehicle and the vehicle in front of you.