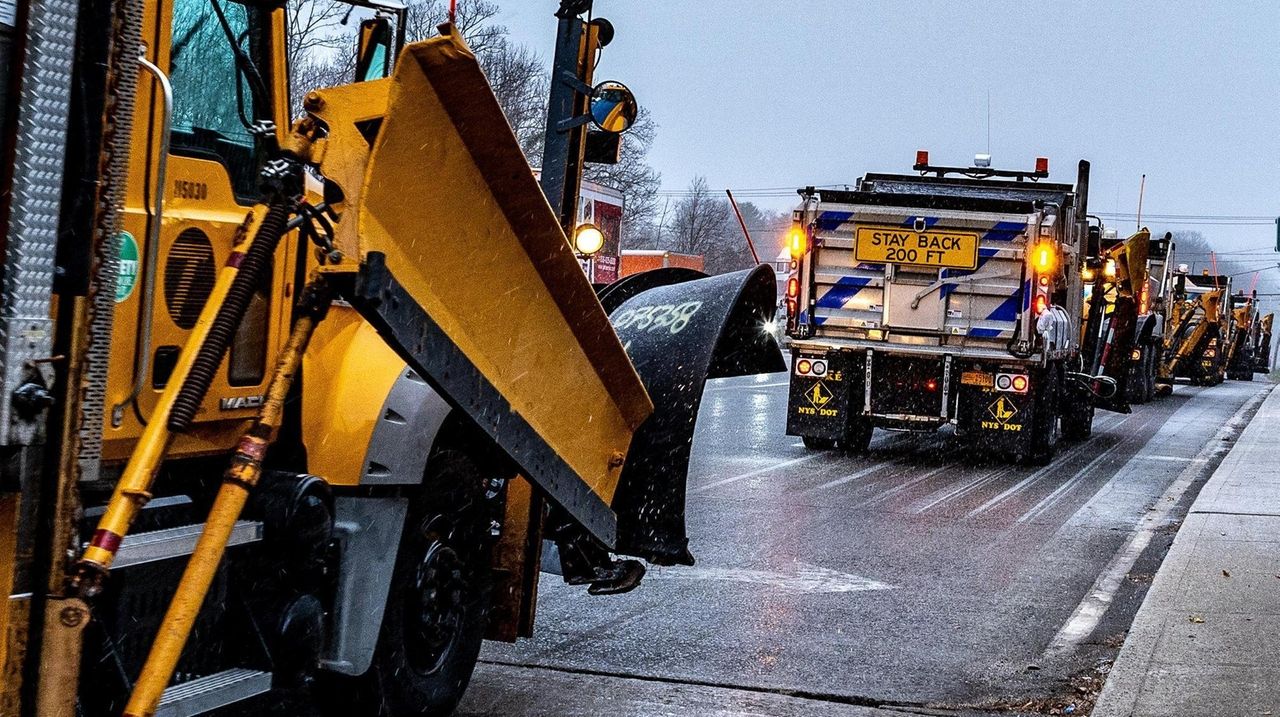 Officials in Suffolk and Nassau are stressing safety to residents as the major snowstorm is set to arrive on Wednesday. Newsday's Chelsea Irizarry reports. Credit: James Carbone, Howard Schnapp and Chelsea Irizarry

A powerful coastal storm is set to hit the region Wednesday, with high winds and up to 11 inches of snow in some areas of Long Island that could potentially close schools, cause power outages and make driving a challenge.

But with the system trending farther north, the National Weather Service late Tuesday lowered projected snow totals for the South Shore and Suffolk's East End because of the increased likelihood of sleet and rain mixing with snow.

However, the weather service cautioned, if the zone of mixed precipitation shifts 20 miles south, local projected totals could rise again.

The storm is forecast to begin Wednesday around rush hour and taper off midday Thursday, at times dropping snow at a rate of 1 to 2 inches an hour, with visibility of a quarter-mile or less, the weather service said. 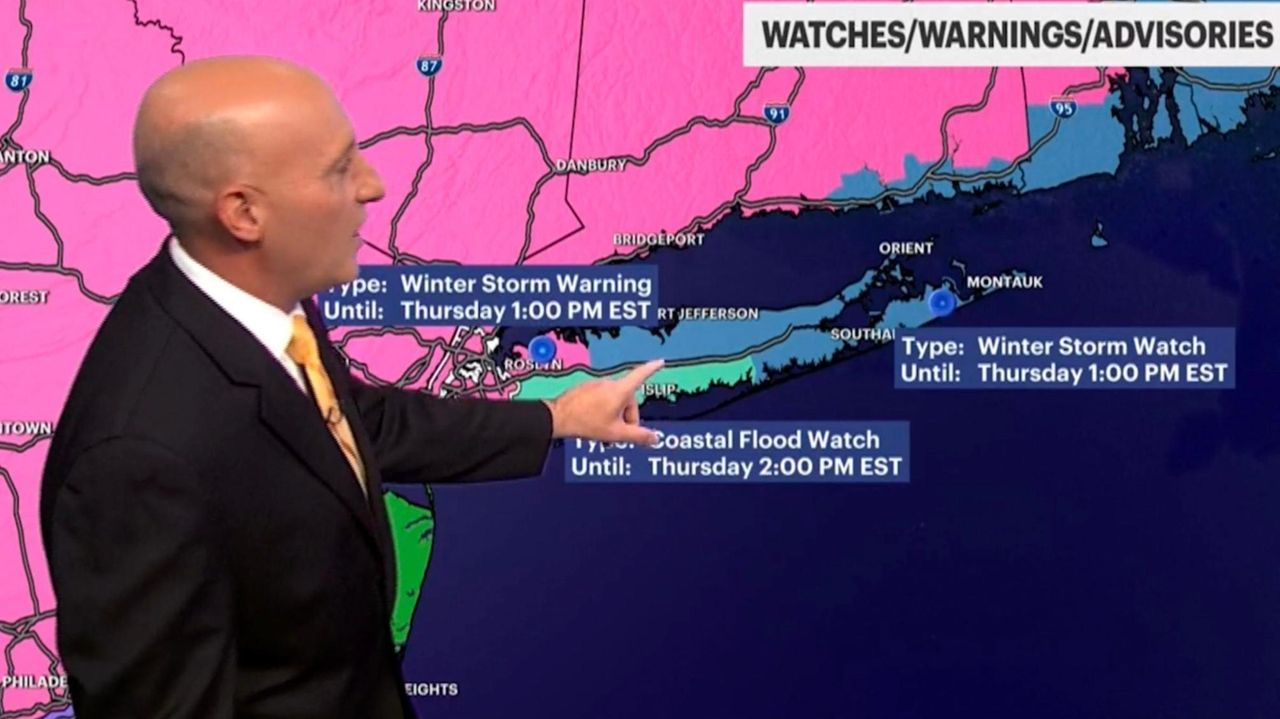 Winds of 25-35 mph, and gusts of up to 50 mph, could knock down tree limbs and cause outages, officials said.

The storm is the first major snow event to come through Long Island during the pandemic, presenting yet more challenges for county and school officials. But it may not mean a snow day for all students.

According to a memo from the New York State Department of Education, the state established a one-year snow day pilot program to enable school districts to provide remote learning on what would otherwise be a day of school closure due to an emergency.

The pilot is in effect for the 2020-21 school year and will then be reviewed by the state education department to see if it should continue.

State education department officials said they do not track which districts are participating in the program and that it is up to the district.

The memo said the pilot was proposed "as part of the [education] department’s ongoing efforts to provide districts with flexibility in meeting local needs during the [coronavirus] pandemic."

The 4,500-student Huntington district is among those that signed up for the snow-day pilot program.

Jim Polansky, the system’s superintendent, said if the forecast for heavy snow remains unchanged, schools would close Thursday and students would work from home on a combination of individual lessons and exercises led by teachers also working remotely.

Polansky noted that the outcome of the pilot program was somewhat uncertain.

"With all the discontinuity that children have faced in recent months, this is an option that, I think, families will find valuable," he said.

The Wyandanch school district, however, opted not to participate in the program.

"Snow days are chances for on-site learners and virtual learners to just be kids by playing in the snow, baking cookies, reading books, watching a good movie and simply enjoying family time," Superintendent Gina Talbert wrote in a letter Monday.

Counties, town at the ready

Long Island counties, towns, cities and villages said they were prepared for the first storm of the season.

Nassau County, which has 87 snow trucks, 21,400 tons of salt and 850 tons of sand in place to clear the roads, said the first storm of the COVID era presents unique challenges, including ensuring that workers are properly separated and vehicles are sanitized.

"After the year we've had, this is kind of a normal problem," Nassau County Executive Laura Curran said at a news conference Tuesday in Hicksville.

The combination of high winds and heavy snowfall could lead to power outages, while coastal flooding remains a possibility, Suffolk County Executive Steve Bellone warned at a news conference Tuesday in Commack.

Bellone said the meager snowfall last winter left the county with plenty of road salt to combat whatever the storm brings.

"We have not had a significant snow event in some time," he said. "But it appears now we will be taking a hit from this storm."

Town supervisors across the Island said they have plenty of salt, plows and payloaders standing at the ready to clear the streets once the storm clears out. But they urged residents to stay off the roads and take care of errands before the storm begins.

"We’re aggressively preparing and plowing the roads and telling people, ‘If you don’t need to go out, stay home,’" said Hempstead Town Supervisor Don Clavin. "Go get the proverbial milk and bread and eggs and fill up the cars with gas."

The town is canceling town-run COVID-19 testing Wednesday and Thursday at Echo Park in West Hempstead for residents and first responders. Testing will resume Friday.

Freeport Village officials suspended parking regulations and urged residents to not park their cars in the streets to allow for roads to be cleared.

Brookhaven officials said that nearly two years since the last major winter storm, the town is well stocked with supplies.

Islip Supervisor Angie Carpenter said the town had more than 500 trucks "fueled up and ready to roll" on Wednesday.

"It’s ‘all hands on deck’ in the Town of Islip when it comes to storm events," Carpenter said. "Our ... staff is currently in storm mode, prepping for whatever comes our way."

Dogs and cats can become disoriented in snowstorms and unable to find their way home, suffer frostbite or freeze to death quickly, according to the Suffolk SPCA, which advised Long Islanders to bring their pets inside.

The SPCA advised pet owners to use dog boots for walks and to clean paws, bellies and legs when back inside as road salt can burn, cause vomiting and seizures, and sweet-tasting antifreeze can kill.

And the SPCA suggests blowing the car horn or banging on the hood before starting the engine in case a stray sheltered under the hood.

Bellone warns motorists about possible 'blindout conditions'More than a foot of forecast snowfall and wind gusts reaching 50 mph will hamper plowing operations and make for a "treacherous" commute Wednesday night and a "very, very difficult" commute Thursday morning, the Suffolk County executive predicted. Forecast: Live radar and latest details for your areaCheck the hour-by-hour forecast and see future conditions. Who to call, where to go for information about the stormHere is a list of key phone numbers for Suffolk and Nassau governments and agencies that Long Islanders can call to report snowstorm-related problems, or to get information related to snow removal, road and street conditions, trash pickup and other questions.