The nor'easter may have come and gone, but crews are working well into the night across Long Island Thursday, cleaning up the debris left behind. Newsday’s Chelsea Irizarry has more. Credit: Newsday / Steve Pfost

The storm that blanketed the region this week gave Long Island a bit of a break, but forecasters warn that subfreezing temperatures will keep the crusty snow around awhile and whatever melts will turn to black ice.

It was a storm that walloped the Northeast but shifed north just before it got to Long Island — enough to spare the region from record-breaking snows that paralyzed upstate.

Gov. Andrew M. Cuomo declared a state of emergency for 18 upstate counties and across the state, and there were 600 storm-related automobile crashes on state roads, including two fatalities.

Long Island's snowfall, more than eight inches in some places and weighed down from the rain and sleet that mixed in, was still enough to create dangerous driving, delay railroad trains and shutter schools. 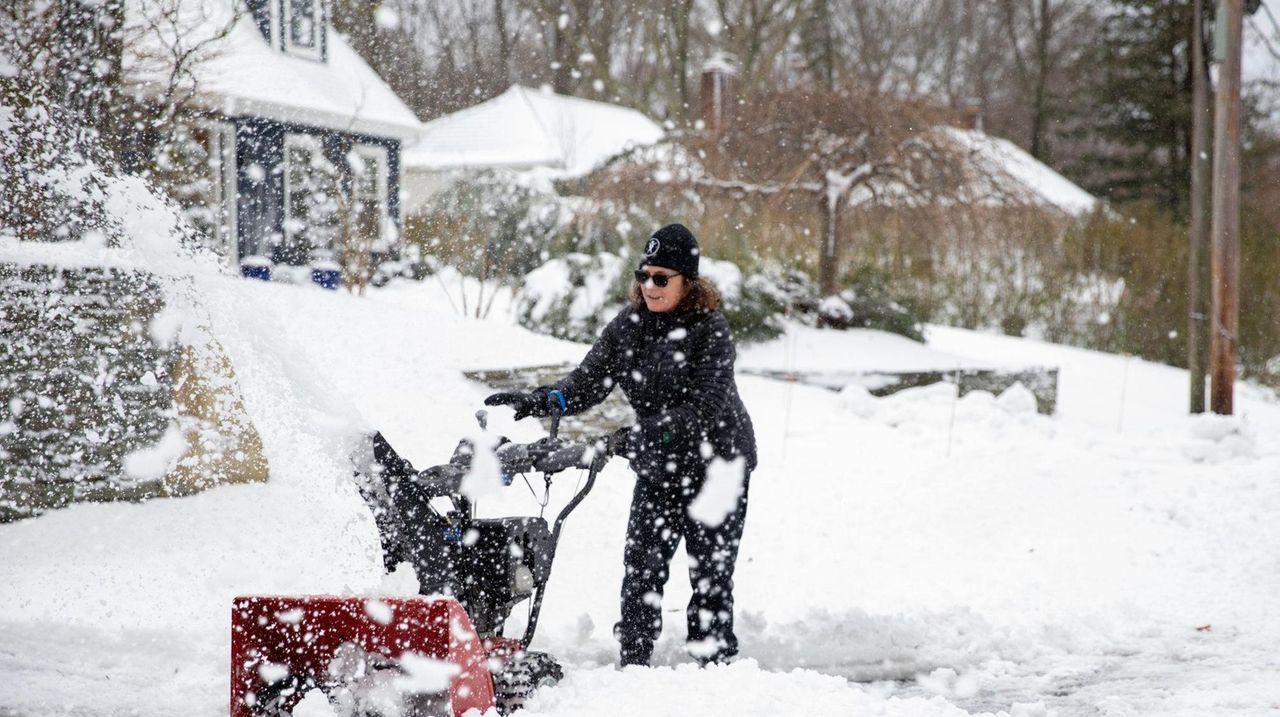 Cold, slick conditions are expected to continue Friday with forecasters warning of black ice from melting and freezing snow. The sun will be out, but temperatures will only reach 34 degrees, with the wind making it feel more like 10 to 20 degrees, according to the weather service. Friday night will dip down to 17 degrees.

Saturday will feel much the same, with highs near 35 but wind chills between 10 and 20 degrees and forecasters warn drivers and pedestrians to watch out for black ice.

Sunday brings a break, with temperatures reaching as high as 43, the weather service said.

The storm complicated daily life, delaying buses and the LIRR and forcing those in need to go to warming centers and find emergency housing. The ill and the elderly were left to cope with crusty snow around their homes and in the street.

In Nassau, the amount of snow ranged from 5.2 inches in Roosevelt to 8 inches in Syosset, according to the weather service. In Suffolk, snowfall totals ranged from 3.3 inches in Southhampton to 8.2 in Miller Place. 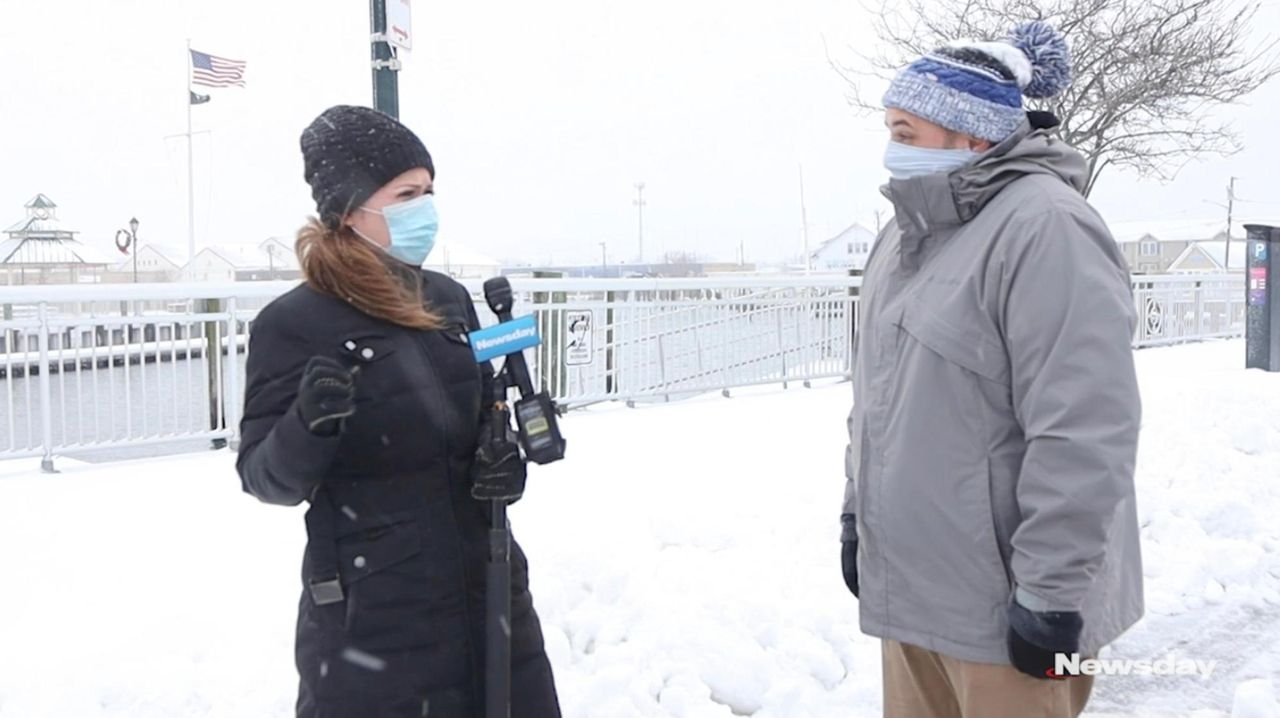 But there was enough snow from the storm to give Long Islanders one unexpected benefit.

For one short day, Long Islanders were able to focus on something other than social distancing and staying germ-free.

Kids broke free to sail their sleds down snowbanks in Wantagh's Cedar Creek Park, laughing all the way. In neighborhoods across the Island, pandemic-weary neighbors emerged from their homes to help each other clear snow.

Many wore masks with their gloves and knit caps. But the quiet fall of flakes seemed a welcome reminder of what life was like before, and will be again, after COVID-19. 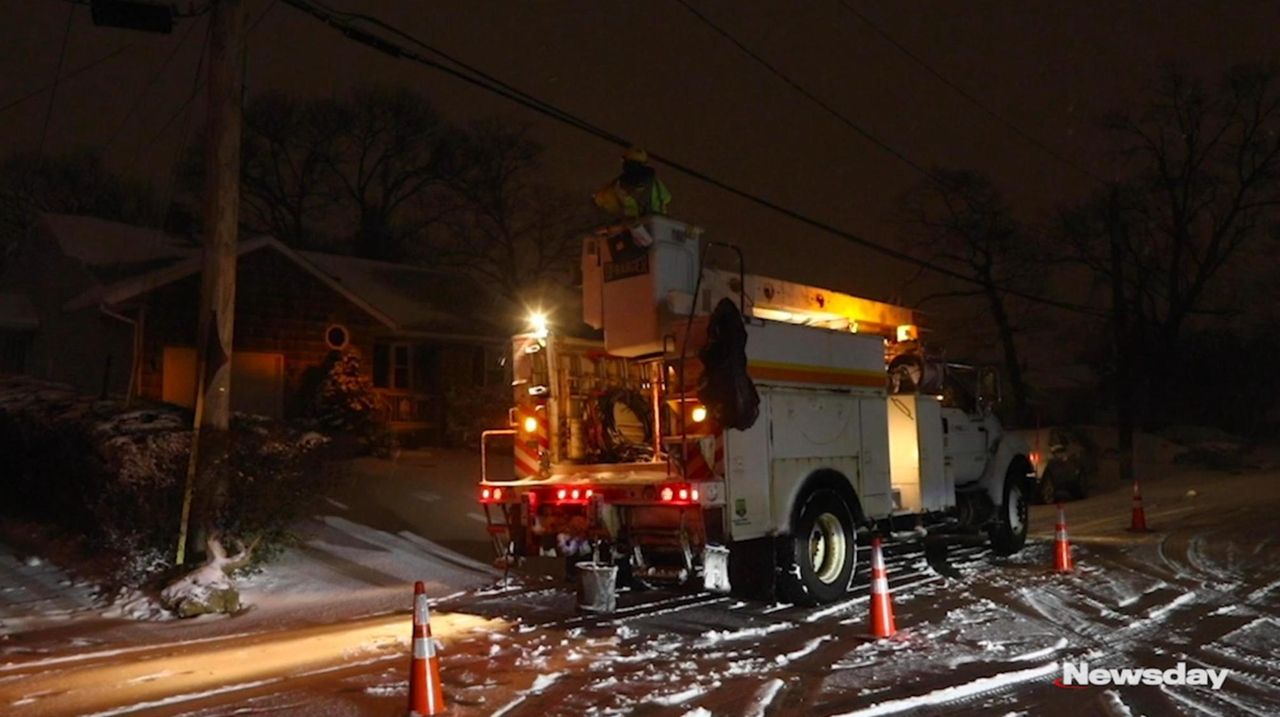 Nor'easter causes power outages for some on LI The nor'easter that rolled across Long Island left some without power Wednesday night. Newsday's Pat Dolan spoke to residents in Babylon as workers from PSEG Long Island worked to restore their electricity.  Credit: Newsday / Chris Ware

"Today was possibly the most normal day of 2020," said Bellmore resident Kelly Pashalidis, who with her kids welcomed the snow with excitement. "We played in the yard for a bit and later made our way to Cedar Creek Park in Seaford for more fun in the snow."

At the park, her son Giannis, 6, laid down and made a snow angel. Her daughter, Ourania, 9, showed off her dance moves with a split, and dozens of other children giggled joyfully, sledding through the snow.

"For a little bit, everything felt happy and OK," Pashalidis said.

Standing outside his Port Washington home, white flakes drifting onto his orange knit cap, Brian Goldberg looked around him at his street — and saw a lot of good coming from people helping each other through the storm. 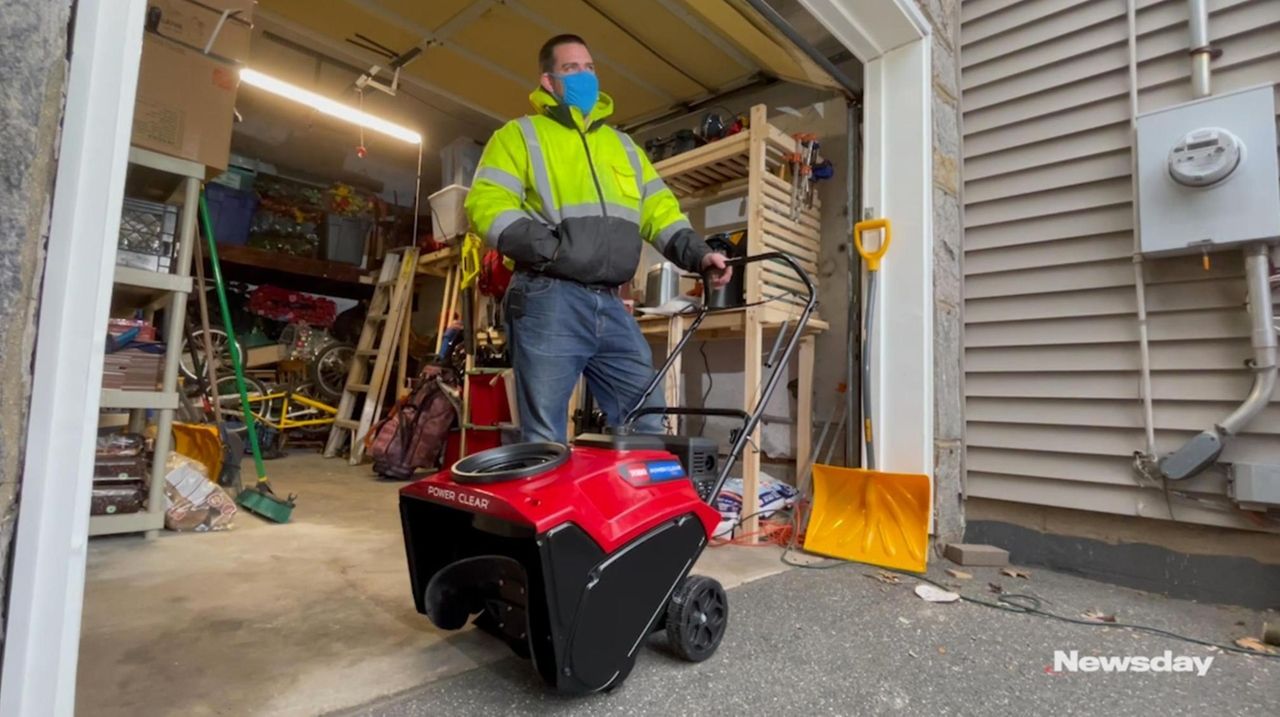 "Neighbors are helping each other, lending out snowblowers," Goldberg said. "It's all right, all good."

Besides clearing out snow, some residents had to deal with power outages, although not as many as expected. By early afternoon PSEG had restored nearly all of the more than 16,000 outages it encountered during this storm, with fewer than 500 customers still without power by 3 p.m.

By comparison, Tropical Storm Isaias, which was primarily a windstorm, saw more than 645,000 outages to more than 535,000 customers, some with repeat outages, and some lasting more than eight days.

"This storm brought down trees and wires throughout our service area," PSEG vice president John O’Connell said in a statement.

The Island’s 124 public school districts, some already all-remote due to the coronavirus pandemic, took varied approaches to the storm. Several, including Cold Spring Harbor, East Meadow, Elwood, Massapequa, Mineola, Oyster Bay-East Norwich and South Country, decided to make Thursday a "traditional snow day," while others, such as Huntington and Riverhead, moved all classes to remote learning.

The storm gave families cooped up at home a chance to finally get out of the house, shovel some snow over their shoulder and let the kids go bananas in all that white stuff. The sun came out in the afternoon and people flocked to the parks, kids in tow.

Wantagh's Cedar Creek Park, a prime sledding destination, was so packed it had to close for an hour Thursday afternoon, turning vehicles away until capacity was reduced.

Kamal Zeath of Queens pulled his 3-year-old son Zidan on an inflatable sled through Eisenhower Park in East Meadow.

"It’s been awhile since we’ve seen a lot of snow. We’re taking advantage of it and enjoying what we can and trying to find a slope," Zeath said.

His face red from the cold, Malverne resident Brian Saphire, who has been mostly out of work due to the pandemic, was hard at work Thursday shoveling snow for his neighbors. Response to his social media post offering to shovel for money was so overwhelming, Saphire had to recruit some help.

"Everybody is thanking me for coming out. One lady brought us hot chocolate. This is a 'towny' town," Saphire said. "They love helping the residents."

With snow blowing around him Thursday morning, Robert Gannon of Port Washington was using his new plow truck to help elderly people clear away snow from the front of their homes — and he was asking no money to do it.

"We're trying to pay it forward, especially during a tough year," said Gannon said, who noted that some people insisted he take some cash.

With thick, fat snowflakes still falling Thursday afternoon, a group of parents and children took to the sledding hill behind Old Bethpage Elementary to catch air and wipe out.

"Kids see the snow and they want to play," Jeremey Friedman of Old Bethpage said.

A group of parents who live across the street on Melissa Lane marched with their kids towing sleds to the sledding hill in the back.

"With everyone being shut down this year, it’s so refreshing that everyone can just go outside and play," Friedman said.

Melissa Famiglietti took aim at the heavy snow in front of her Port Washington home with the family's snowblower, with her husband working and her kids out playing. Her father had left her step-by-step instructions on how to operate it, she said.

"I know how to turn it on and get (the snow) cleaned up," she said. "I think it's nice that everything is so serene and peaceful. And I hope that it warms up and melts really quickly."

She chalked up the storm to yet another blow from a year filled with tough trials.

For Kelly Pashalidis and her husband, John, their day in the park will be remembered for all the smiling children.

Once settled back home, the couple and their kids drank hot cocoa.

"It somehow made up for such a crazy year," she said.

See photos from this winter's stormsSee photos of snow that has fallen on Long Island during the winter of 2020-2021. Check the latest school closings and delaysSome events and activities have been canceled tonight due to weather. See the full list. Forecast: Live radar and latest details for your areaCheck the hour-by-hour forecast and see future conditions. Latest updates: Winter storm Day 2 on Long IslandA winter weather advisory is in effect until 7 p.m.