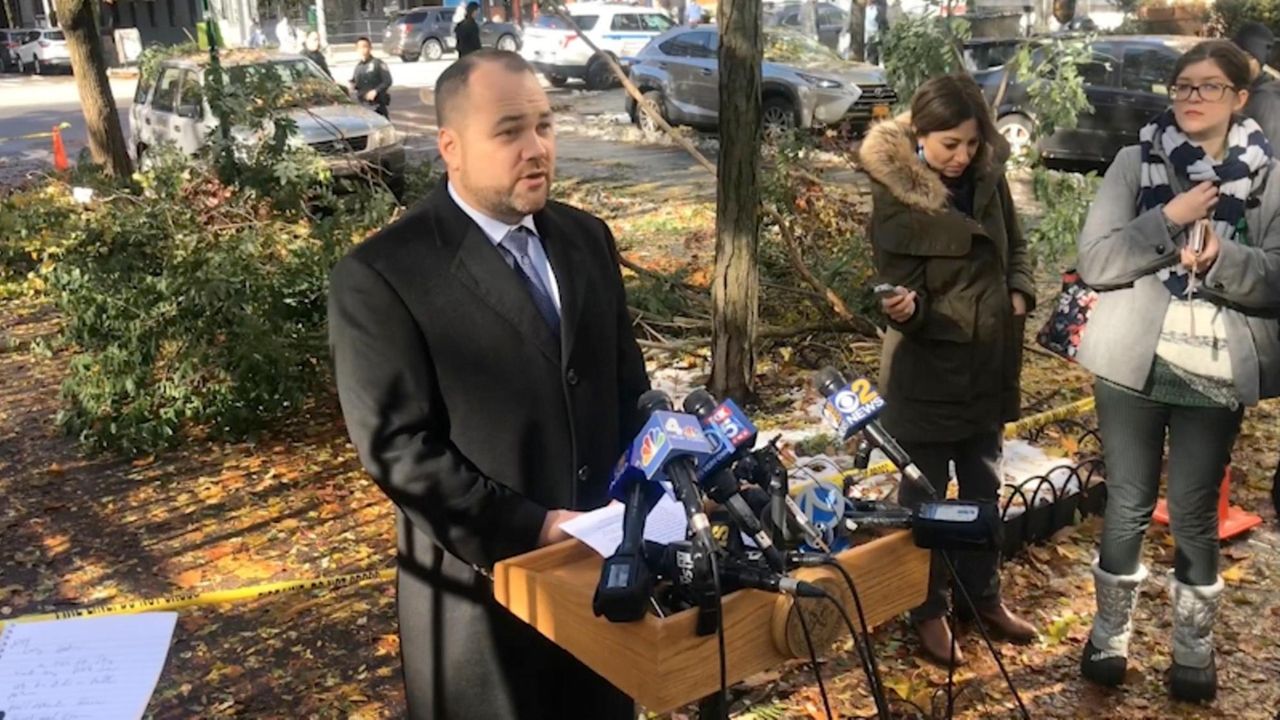 This story was reported by Robert Brodsky, Alfonso A. Castillo, Matthew Chayes and Craig Schneider. It was written by Brodsky.

That was the refrain Friday from Long Island, New York City and state officials after Thursday's surprise pre-winter storm snarled traffic across the region, creating a nightmarish evening commute on the roads and rails.

State and local officials blamed the sluggish and often treacherous drive on a "perfect storm" of unforeseen circumstances. They pointed to incorrect initial forecasts that predicted a little more than a dusting of powder, hundreds of vehicular crashes that clogged main arteries, and the storm's unfortunate timing — reaching its apex during the evening rush — for preventing snow plows from reaching problem areas.

"We were not unprepared," said Michael Martino, a spokesman for Nassau County Executive Laura Curran. "We were totally prepared, but Mother Nature threw us a curveball."

How much snow did your area get?

Nassau Department of Public Works officials pre-treated county roads Thursday afternoon, but Martino said putting snow plows on the road during the height of rush hour would have been pointless. "How effective can a snow plow be if it's sitting in traffic like everyone else?" he said.

Joe Morrissey, a spokesman for the state Department of Transportation, said nearly 250 plows were dispatched across state roads on Long Island.

"While we fully understand and sympathize with the public’s frustration, the storm unexpectedly intensified just as motorists were beginning their nightly commute home from work, which led to delays and some complications with snow removal in areas with heavy traffic," Morrissey said.

On social media, many Long Islanders, livid about an evening commute that stretched into a third, fourth or fifth hour, placed the blame on weather forecasters. Questions posed by many residents: How did they get this storm so wrong and why weren't they given advance notice to get home earlier?

What the storm did to three Long Island commutes

Joe Pollina, a meteorologist with the National Weather Service in Upton, conceded coastal storms can be difficult to forecast due to challenges associated with capturing information about happenings along the Atlantic Ocean.

“We’re not getting a complete picture,” Pollina said. “It’s not always perfect.”

New York City Mayor Bill de Blasio, who took criticism for the city's storm response, declined to take responsibility for traffic snarls in the five boroughs. On Friday, he blamed meteorologists, who initially predicted an uneventful mix of rain and slush, and the domino effects caused by the rush-hour shutdown of the George Washington Bridge.

“I think this is an example that’s not as simple as people quote unquote dropping the ball,” de Blasio said on his weekly radio appearance on WNYC.

At an afternoon news conference at City Hall, de Blasio contended the city could not have foreseen or prevented the traffic nightmare.

The transportation picture was not quite as grim on the rails, but dozens of Long Island Rail Road trains were delayed or canceled, slowing the commutes of thousands of riders.

The LIRR attributed the problems to a range of weather-related complications, including a vehicle stuck on the tracks near Gibson station, signal trouble in Brooklyn, a broken crossing gate near Central Islip, a tree that fell on the tracks in Bayside, and switch problems in multiple locations.

“It was a sloppy night, but I think given all the transportation issues across the New York metropolitan area, the Long Island Rail Road moved people home safely and we did our best to minimize their delays,” LIRR president Phillip Eng said. “We could always do better in anything we do, but my goal was to say I got them home safely.”

Other than some scattered delays, the LIRR reported normal service Friday morning.

Area airports also were recovering Friday from a slew of weather-related problems.

The storm's powerful gusts, which downed trees and power lines across the region, caused many Long Islanders in Nassau and western Suffolk to spend Thursday night in the dark.

PSEG spokeswoman Elizabeth Flagler said 35,544 customers lost power during the storm. Extra crews worked through the night to restore power to 32,207 of them. Flagler said she expected most of the remaining outages to be restored by Friday evening.

The storm damage, she said, was particularly troublesome because it occurred during a time of the year when leaves are still on the trees. The snow accumulating on the leaves eventually weighed down the limbs, causing trees to topple, she said.

Long Island town officials said they did all they could to prepare for the storm, but that rapidly changing conditions created unanticipated problems.

“This was not a large storm," Huntington Highways Superintendent Kevin Orelli said. "Normally, it wouldn’t be a difficult event to deal with, but key factors like vehicle congestion and the time of day made this storm very problematic."

Town of Islip DPW Commissioner Tom Owens said the challenge grew as the "temperature dropped, and the snow locked in for longer than anticipated. That, along with rush-hour traffic, created a very dangerous challenge for both the residents and our workforce."

Babylon Town Supervisor Richard Schaffer said while residents may be anxious to point the finger at elected officials or meteorologists, sometimes there's no one to blame. "It was a perfect storm of timing versus conditions versus not being told," Schaffer said.

Asked what could have been done differently, North Hempstead Town spokeswoman Carole Trottere mused that "we could have asked Mother Nature to send that storm around 11 p.m. after everyone was safely home."