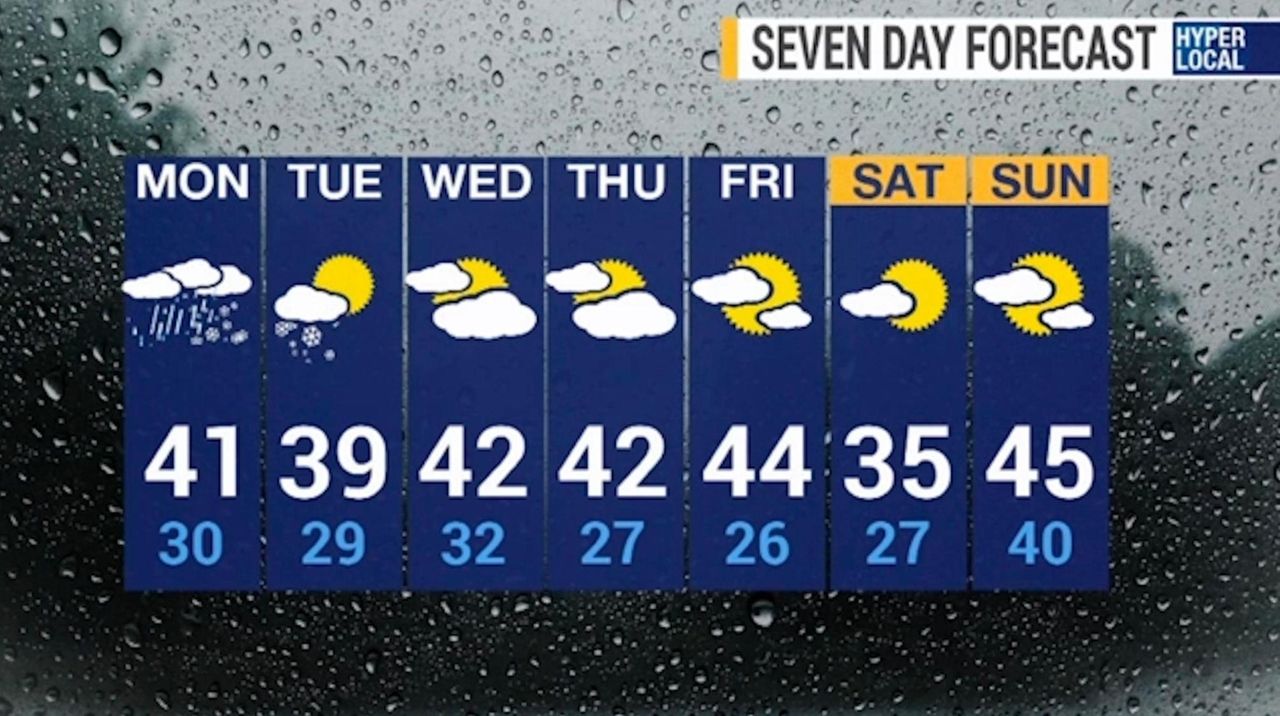 Between 1 and 5 inches of snow was in the Long Island forecast for late Monday night into Tuesday morning, according to forecasters with the National Weather Service's Upton office. The overnight low was expected to be 30 degrees with gusts between 16 and 21 mph by 7 a.m. Tuesday, making it feel closer to 20 at the bus stop or LIRR station.

Long Island's East End should fare best with about an inch of snow predicted, the weather service said.  Farmingdale is forecast to get the most snow, five inches, with Islip getting three inches.

The heaviest snowfall would likely end by midnight Monday with light snow continuing before tapering off by 7 a.m. Tuesday, forecasters said.

"We’re going to have snow varying in intensity, not consistently moderate or heavy, but there could be a few bursts of moderate to briefly heavy snow," said Jay Engle, a meteorologist with the weather service in Upton.

After that, forecasters said, the clouds are expected to be replaced by mostly sunny skies and a high of 39. Partly sunny skies are forecast through Friday with daytime highs on Long Island hovering around the low 40s with overnight lows at or just below freezing, the weather service said.

The North Shore from Nassau to western Suffolk could see 3 to 5 inches of snow while eastern Suffolk's North Shore could see 1 to 3 inches before the storm moves on early Tuesday, Engle said. The South Shore will see less snow, about an inch, because temperatures will be slightly warmer along the coastline, he said.

Areas north and west of New York City were expected to get up to eight inches of snow, the weather service said.

New snow accumulation of 3 to 6 inches of snow was forecast for New York City, according to the weather service.

Since Sunday, the storm has dropped 20 inches of snow in upstate East Glenville, 15 miles northwest of Albany — the highest snow total in the Northeast so far.

Though Long Island was expected to get off easy by comparison, road sanders were out in force predawn Monday, laying down salt and sand on major area roadways. The MTA issued an alert to Long Island Rail Road riders, advising of "wintry weather conditions" in the area — and urging riders to allow not only extra travel time, but to "use caution when walking on station platforms and staircases."

Riders also were urged to monitor for service updates at mta.info/lirr.

In statement Monday, Nassau County Executive Laura Curran, advised residents to take extra precautions due to hazardous driving conditions through the Tuesday morning commute. Additionally, Curran said, several warming centers will be open throughout the county. Those who need a warm bed can call the county’s homeless hotline at 1-866-WARMBED.

The storm also caused disruptions for travelers at airports across the region and the country.

The Federal Aviation Administration reported a traffic management program in effect at LaGuardia Airport due to snow and ice. Average flight delays at La Guardia on Monday topped out at almost two hours, the FAA said. At Kennedy Airport, snow and ice was causing some arriving flights to be delayed an average of about 90 minutes, the FAA said. Delays of less than 15 minutes were reported Monday night at Long Island MacArthur Airport, according to the FAA.

MTA official Craig Cipriano expressed confidence that the transit system would run smoothly throughout the storm.

"We're fully prepared to get our customers back home safe this evening as well as get them back into the city [Tuesday]. We've had many storm preparations over the last 24 hours, including making sure that our trains are available and extra staffed to do sanding and salting of the platforms as well as making sure that we keep our third-rail heaters on," he said.

10 years ago, we were buried under 2 feet of snow. Will it happen again?Will it snow for the holidays? How cold will it get? Will we get one of those freak storms? We'll find out soon enough.