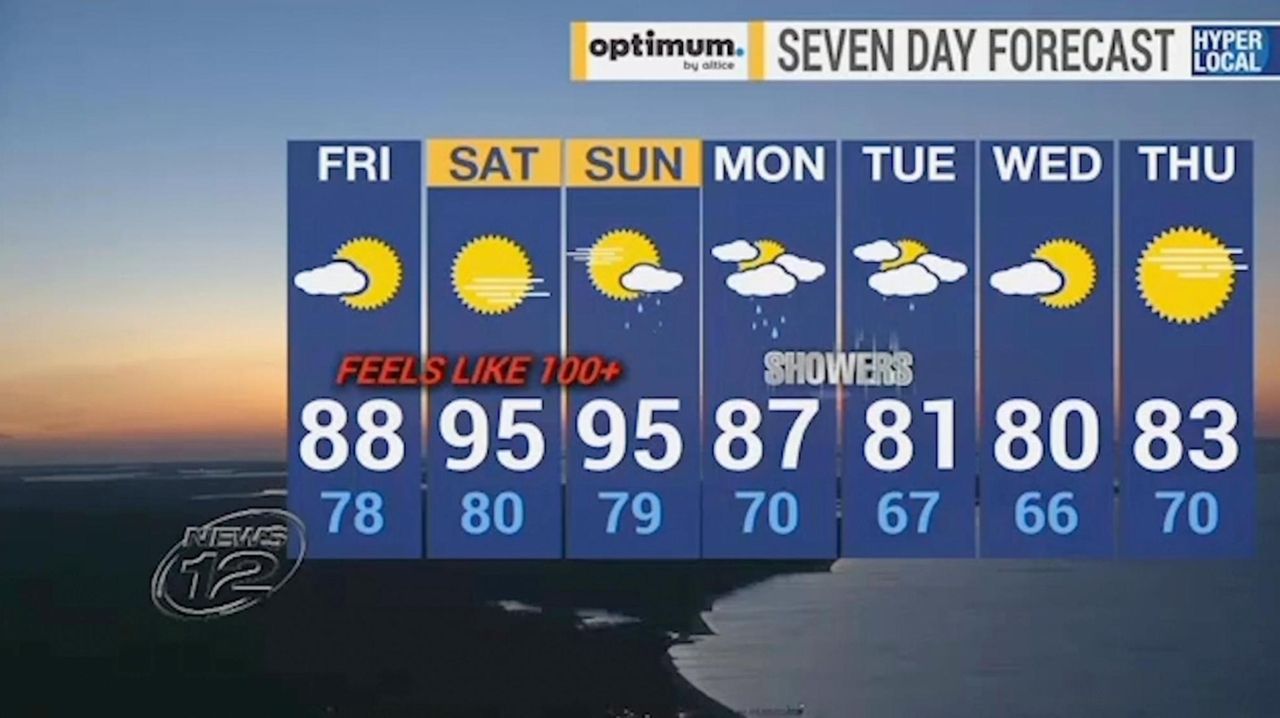 Friday has been a hot, muggy day, and dangerous heat is on tap for Saturday and Sunday, forecasters said.

Long Island is under an excessive heat warning for the weekend, and “that’s as bad as it gets,” said Pat Cavlin, News 12 Long Island meteorologist, pointing to expected air temperatures in the mid-90s both days, and "feels-like" temps of 100 to 110.

That is as measured in the shade, he said, not the sun, which would be much worse.

The extreme heat can cause illness and death for at-risk populations who cannot stay cool, the National Weather Service said.

Though plenty uncomfortable, conditions Friday as of about 4 p.m. weren't quite as oppressive as expected.

At that time, Stony Brook registered 84 degrees, feeling more like 92. In Hempstead, it was 84, but feeling like 91 and at Long Island McArthur Airport it was 82, feeling like 89.

Temperatures and heat-index values hadn’t risen quite as high as expected thanks to some persistent clouds, particularly around the South Shore and from Islip east, said Faye Morrone, weather service meteorologist in Upton.

There’s a slight chance after around 8 p.m. Friday for some showers and possibly a thunderstorm to move into western Nassau County, with the main action farther to the west, Morrone said. Heavy rain and gusty winds could accompany any storm that does arrive.

With conditions like those expected for the weekend far less common than in the South, not everyone in the Northeast has air conditioning, which “leaves us more vulnerable to the heat,” said Jessica Spaccio, climatologist with the Northeast Regional Climate Center, based at Cornell University.

The “elderly, young, and sick are more vulnerable to the heat, as well as low-income individuals,” she said.

Friday's heat advisory is in effect through 6 a.m. Saturday. Then, the excessive heat warning kicks in and runs through 8 p.m. Sunday.

An air quality alert was in place through 11 p.m. Friday, with youngsters and anyone with impaired breathing or a heart condition cautioned not to exert themselves outside because of high levels of ozone, formed when chemicals from gasoline and fertilizers react in sunlight.

Overnight lows Friday and Saturday are not going to bring much relief.

The forecast is for a dip to only 77 degrees or so for early Saturday, and around 80 degrees for early Sunday, the weather service said. Normal lows for those days are 66 and 67.

And, therein lies a further issue. “No overnight respite from the heat,” Spaccio said. Indeed, this is part of a gradual trend, as “low/nighttime temperatures have been increasing over the past half century, largely due to climate change.”

So what do we have to thank for this steamy, scalding stretch, which comes about when moisture-laden air meets up with plenty of heat?

For one thing, air dripping with moisture is being drawn up from the south and southwest, with enhancement from what was Hurricane Barry, a major rain producer, said Nick Bassill, modeler and meteorologist with the University at Albany and the New York State Mesonet.

In addition, there’s “a very strong jet stream across the northern part of the country,” Bassill said. Those west-to-east winds lead to “a strong sinking motion as that air leaves the Rockies,” given the drop in elevation. And, “as air sinks, it warms.”

The result — “both very warm and humid air coinciding,” he said.

At least the sizzling stretch isn’t expected to last long, with a cold front set to arrive Monday, breaking the high heat and humidity, the weather service said.

'Get home to air conditioning': LIers working in the heatLIers whose jobs are outside have found ways to cope with rising temperatures: using fans, sheltering in the shade and staying hydrated. Huntington pool hours extended for expected heatIn anticipation of the weekend's heat wave, the Huntington town spray park in Elwood and the Dix Hills Park pool will have extended hours and the town will open cooling centers. Heat expected to draw crowds at LI beaches, poolsTowns and villages are opening cooling centers and many municipalities have extended pool and beach hours.