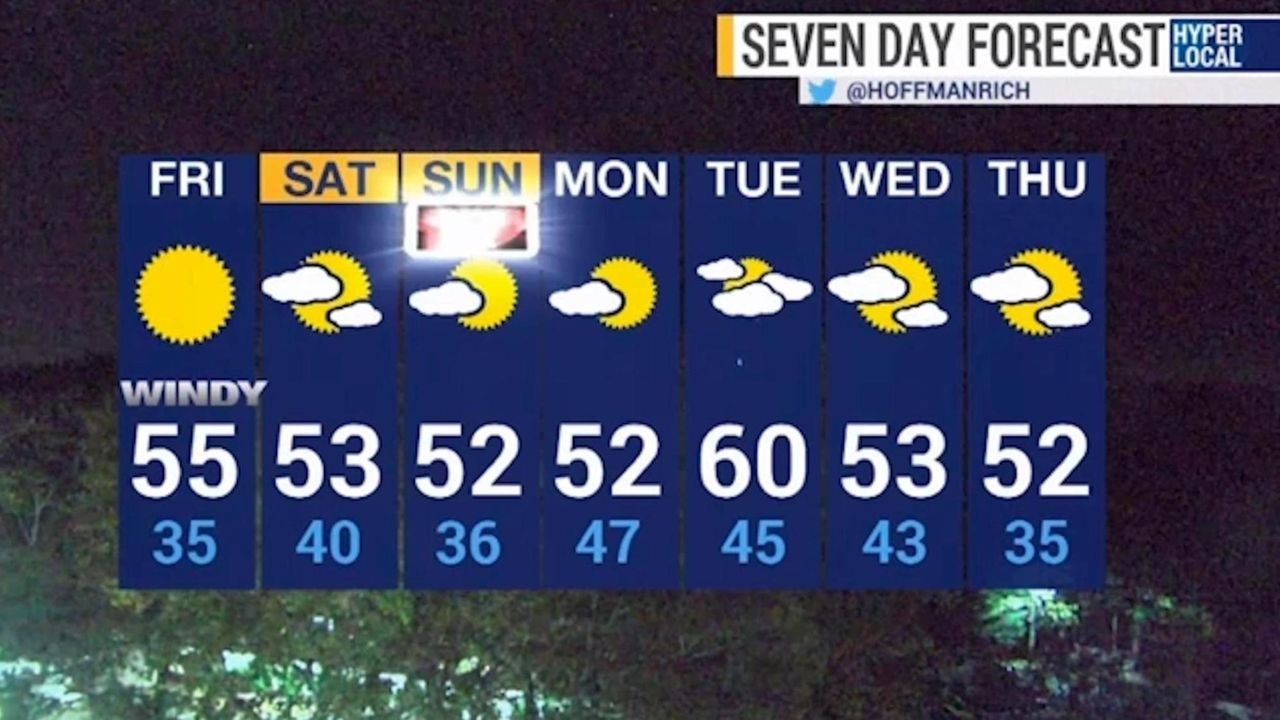 The National Weather Service says Saturday might begin with patches of frost before 9 a.m., winds should relax to a mere 6 mph and the temperature should hit 53 degrees. News 12 meteorologist Rich Hoffman has Long Island's weekend forecast.  Credit: News 12 Long Island

The gusty winds of the past few days have dissipated but residents of eastern Suffolk County could see freezing weather as temperatures were expected to dip dramatically overnight into Saturday morning, according to the National Weather Service in Islip.

A freeze warning for eastern Suffolk begins at midnight Friday and lasts until 10 a.m. Saturday, meaning temperatures could drop as low as 27 degrees, forecasters said. Residents in the western half of Suffolk would get a slight reprieve. A frost advisory — the first of the season — was issued for that region beginning Friday at midnight and lasting until 10 a.m. Saturday when temperatures were expected to hover in the upper 30s, meteorologists said.

Mother Nature is expected to be kinder this weekend.

Highs are expected to be in the 50s Saturday and Sunday with few clouds, meteorologists said.

The impact from the windy weather from earlier in the week could still be seen on Long Island on Friday.

By 9 p.m. Friday, about 1,900 PSEG Long Island customers still had no electricity — down from more than 58,000, according to the utility, which expects to restore most of the remaining storm-related jobs overnight.

The Halloween night storm that blitzed the Eastern Seabord inconvenienced Long Island drivers in spots, and delayed Long Island Rail Road commuters by half an hour or so.

In the Town of Southampton, the replenished dune on Dune Road — which was rebuilt after a coastal storm caused severe erosion last month — held surprisingly well, said Town of Southampton Supervisor Jay Schneiderman, who surveyed it about an hour before the morning high tide after checking it out around midnight.

The damage from the Halloween storm had serious repercussions in other states and other parts of New York, however. Gov. Andrew M. Cuomo declared a state of emergency in 11 upstate counties and deployed 200 National Guard members to assist in the response.

Unofficial readings in Stony Brook clocked a top speed of 74 mph around 3 a.m. Friday, though that likely was due to that site's location approximately 300 feet above ground, explained weather service meteorologist Tim Morrin. The speed was 21 mph faster than the maximum clocked by an official weather service monitor that is around 32 feet above ground at the Brookhaven Calabro Airport in Shirley.

With Robert Brodsky and the AP

Remember that freak snowstorm last November? It wasn't the only one.From a deflated Snoopy to 100-mph gale force winds, November can be more of a doozy than you'd expect.