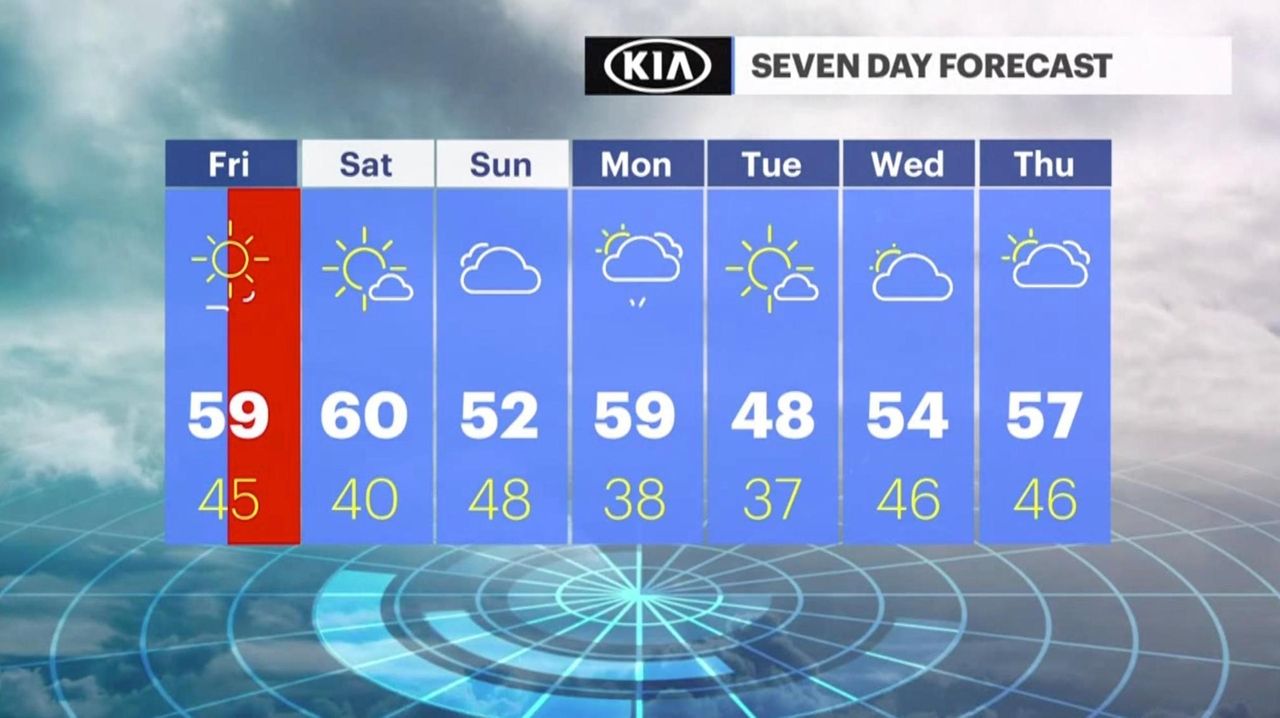 The National Weather Service’s Islip office said Friday will have highs in the upper 50s, but that warmth may be tempered by wind gusts up to 28 mph. News 12 Long Island meteorologist Reed McDonough has the forecast. Credit: News 12 Long Island

Friday's warmth and some of its sunshine will last into the weekend, but morning showers are likely Monday — and whether those downpours reappear on Thanksgiving is uncertain but possible, the forecasters said.

The daytime high expected on Friday of 58 degrees is around five degrees above normal, though the unusual temperature may be countered by some strong winds, with gusts up to 28 mph predicted, the National Weather Service’s Islip office said.

"Southwest winds this evening will gradually diminish and veer toward daybreak with the approach of a cold front … It will be another mild night with lows in the 40s, about 10 degrees above normal," the forecasters said Friday.

Saturday should be a delightful day with sunshine and a high of 60 degrees expected — plus the winds will have died down to 7 mph.

And then the clouds roll in on Sunday, one reason the high during the day will top out at about 51 degrees.

"The easterly flow combined with mainly cloudy conditions on Sunday will result in lows significantly cooler, ranging from the mid-40s inland to around 50 at the coast. This (is) a shade below normal," the weather service said.

Monday’s chances of rain, most likely before midday, are 60%. A high during the day of 59 degrees is expected.

While Tuesday should be clear and quite chillier, with thermometers only rising to 48 degrees during the day, Wednesday could bring more rain. The odds of showers are 30%, and it will be a warmer 54 degrees.

Thanksgiving on Thursday shares the same probability of showers. The daytime high will be 57 degrees, the weather service said.

However, the weather service added: "Forecaster confidence is very low for Wednesday and Thursday next week."

One difficulty is that its models are not in accord, the forecasters explained.

This is their description of one of the complicating factors: "One question surrounds how quickly the surface high retreats up into the Canadian Maritimes on Wednesday. This then relates to how quickly the next system will approach and move across the region."