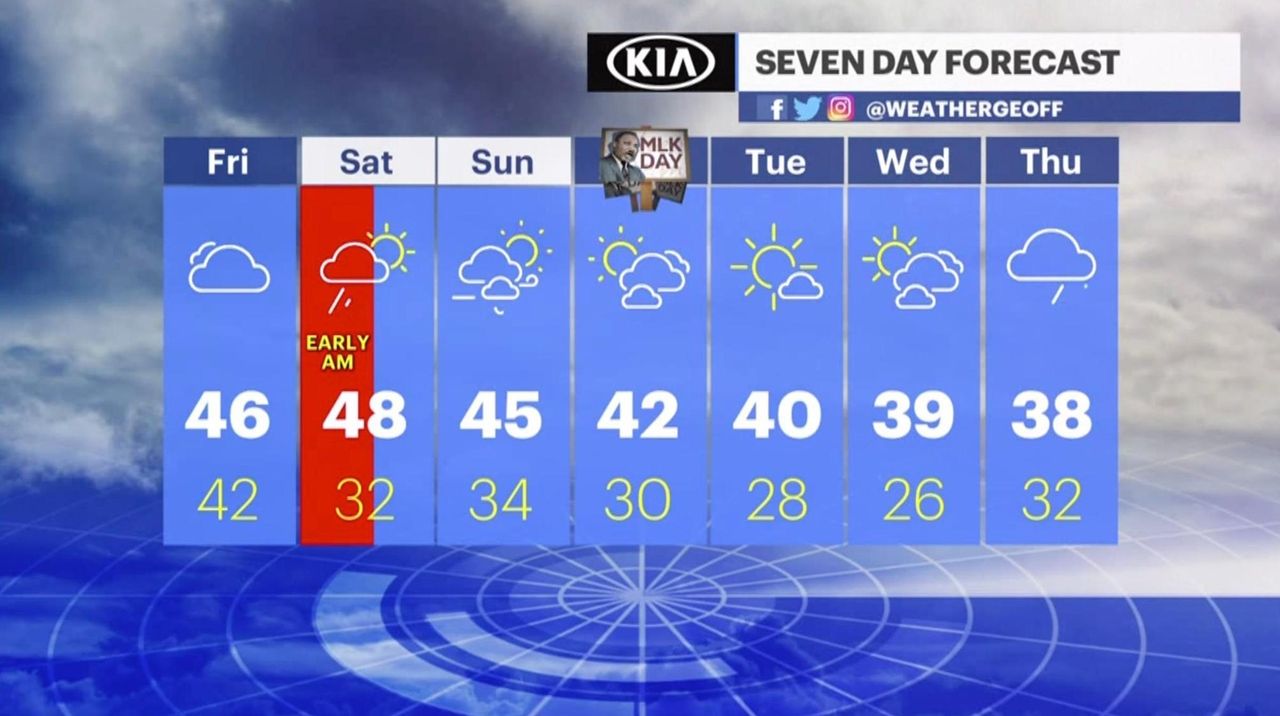 The National Weather Service said Long Islanders could see some fog in the morning, followed by clouds with high temperatures in the mid-40s and rain is expected late friday night.  News 12 Long Island  meteorologist Geoff Bansen has the forecast. Credit: News 12 Long Island

Beware of some spots of fog Friday morning before 9 a.m., forecasters advised, and then look for clouds and a high of 45 degrees with no rain expected until 10 p.m. — though showers may partly blight Saturday, forecasters said.

The odds of downpours are 50% and they may deliver one to two inches of rain. They could linger into Saturday morning, and the day will be a bit cooler, with the daytime high sliding to 42 degrees, according to the National Weather Service’s Islip office.

And then look for a sunny though windy Sunday, a sunny Monday for the Martin Luther King Jr. Day holiday and even a sunny Tuesday, with temperatures once again stuck in the recent range of freezing at night to low 40s during the day.

Even Wednesday and Thursday should let the sun come out to play. And once again, thermometers will not be budging much from their recent tight band, though it may be a few degrees cooler on Thursday.

And before that, on Friday it is possible a few spots may see the rain arrive earlier — along with a bit of exceptional warm weather, at least for January.

"Winds will gradually pick up today out of the east/east-southeast," the weather service said Friday. "This flow off the ocean will allow for the increase of low level moisture through the day with temperatures expected to rise into the middle and upper 40s along the coast."

As a new front approaches, the weather service said, "some rain showers may develop as early as the mid to late afternoon for westernmost areas like the New York City metropolitan (region), Lower Hudson Valley, and northeast New Jersey."

The rain will slowly become more intense, with as much as half an inch per hour possibly falling in areas out east, including on Long Island and southern Connecticut, the forecasters said.

There might be a few snowflakes if residual showers become a factor.

"As temperatures decrease toward the afternoon and evening on Saturday, any brief showers may be in the form of snow but no accumulation is expected," the forecasters said.

That could help produce west winds, the weather service said, which might be as swift as 15 to 25 or even 40 mph, especially out East.